Another fortress needs your help. But this time you arrived in the right moment. A horde of Undead is fighting with Dwarves. 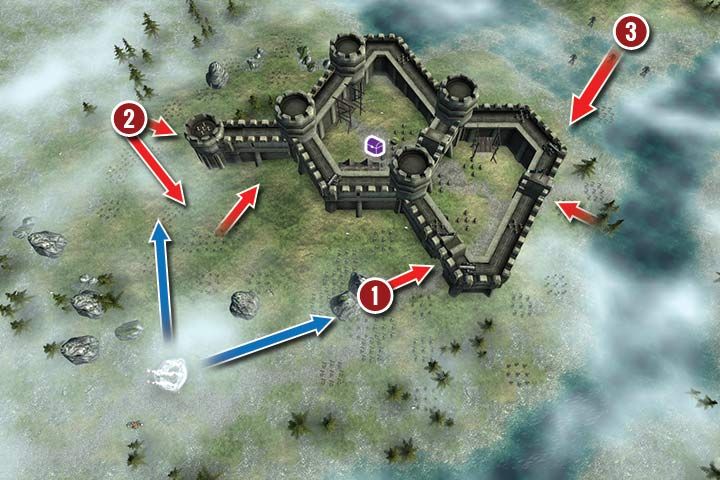 The difficulty of this mission is caused by a few factors. You must face very resistant Skeleton units. The Dwarves are fighting with them but they make a lot of weird decisions and leave good defense stations. They should be able to survive on normal difficulty but on the higher ones they will require your help. A new unit approaches from the north - this will be your biggest challenge here.

The scenario starts near a teleport. Focus on defeating Skeletons to help the defenders. The army that attacks the fort's southern gate consist of regular Skeletons (1). They focus on destroying the gate and attacking the defenders. In the west you can only find Skeleton Archers (2). Their target is the southern gate but they will also attack units on the walls. Stone Golems, approaching from the north, are the biggest threat (3). These units have 300 health points, they are resistant to magic and use powerful ranged attacks. A chest with Fire Weapon scroll is located in the inner part of the castle.

You have two options. Summon Cavalry and ranged units (Crossbowmen/Mages) and charge at the units located north from the teleport. This allows you to quickly defeat the Archers. You can also head immediately to the Dwarven fortress and try to cooperate with the defenders. You have to break through the army that assaults the gate. Infantry and Mages are very useful here but you can also use an additional squad of Cavalry or Catapults. Inside, quickly move ranged units on the walls and order your hero to reach the chest. Also, you can summon your own Skeletons to fight back with more strength.

Defeating Golems will be the biggest problem. Try to fight with only one of them at a time. Don't engage in combat if you don't have enough units. You have to hit them with full power and do that in a shortest time possible so they won't be able to annihilate your soldiers one after another. Mages can't freeze Golems but they can deal damage while, e.g. being hidden behind the walls. Use environment obstacles to get closer to them and attack simultaneously. Use Shield and the previously acquired Fire Weapon scrolls on your hero. Try to attack this opponent in a such way that would make your hero the only unit in Golems' reach. Damage reduction can help him survive longer. A Charge with a strengthened attack will let you deal with these foes.

Playing the mission on a higher difficulty (orange markings on the map). You have to defeat twice the enemies. The Skeletons won't be that much of a problem but you still have to spend some time on them. The Golems are the main threat here. Their ranged attacks can quickly kill all ranged units of the defenders. You will often witness a defeat of the Dwarves before you will even get there. Fall back if the Golems got on the walls! Usually, they will start following you. Your only chance to defeat them is to fight on the ground.