Another challenging mission that will test your skills. You command the same units that you got in the previous mission. The Ballistae and the Healer can't die and they are necessary for you to achieve victory. 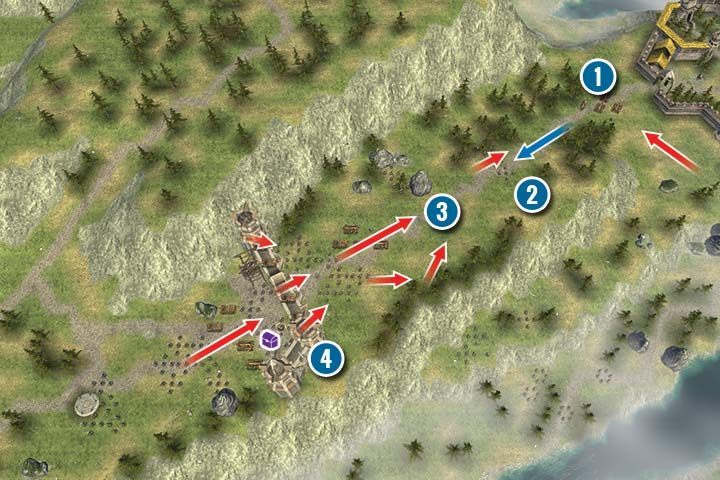 You start right next to the castle, the one that you defended during the previous mission. You have to clear walls and the western gate from enemies. Your forces consist of 3 Ballistae and a Healer who can die with one arrow. Keep her behind your main forces, away from enemies. The same goes for Ballistae but they can eliminate enemies from a far. Again, you can't use a teleport here. Rage, Lightning or Raise Dead scroll are useful for eliminating the enemy Ballistae. Fire Rain works great on multiple units.

After starting the mission, you should wait for enemies to get closer to you (1). Use your hero to attack the enemies in the open field. Also, wait for the Archers approaching you from the river (the eastern arrow). Now, place your Ballistae behind the forest and hide the Healer between the trees (2). Remember that she can heal herself. Wait for the enemies to attack you first (the arrows). Try to always block access to the Ballistae with your hero. The Archers are your priority. 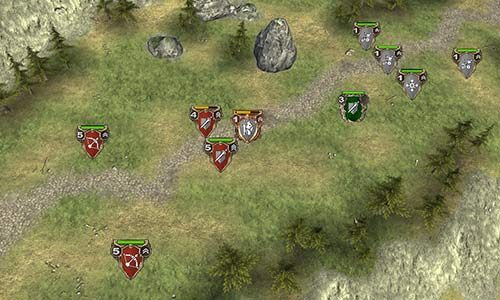 The Ballistae wait for the enemies to get closer. The hero and the skeletons serve both as a bait and a defense line.

Get closer to the big boulder and order your Ballistae to form a line (3). The enemy sends units that were near walls to counterattack. They often use the forest on the slope to get closer to you (the arrows). Defeat this group and get closer to the walls (4). To defeat a Ballista, you have to distract it first. Place your hero near the gate. He should be outside their reach which forces them to get down from the walls. You can also use Raise Dead on the walls, capture or use Mind Control on the enemy Ballistae or simply cast Lightning on them. You can now shoot the Archers.

Playing the mission on a higher difficulty. Increased number of enemies in all locations. There are no additional directions of attacks. However, you can expect an increased number of enemies that can attack you from behind. You can either wait for them or deal with Archers before you move towards the main gate. Fire Rain is very useful here because there are a lot of enemies both in front of and behind the gate, including Ballistae. Focus on slow elimination and wait for the enemies to get closer to you instead of charging at everyone. Don't move the Healer too close. The Elves like to use Archers who can kill this unit with one attack.