Capture the last Orcs fort and defeat the traitor. The siege of the fort won't be difficult. However, this changes with the enemies' counterattack done from south. 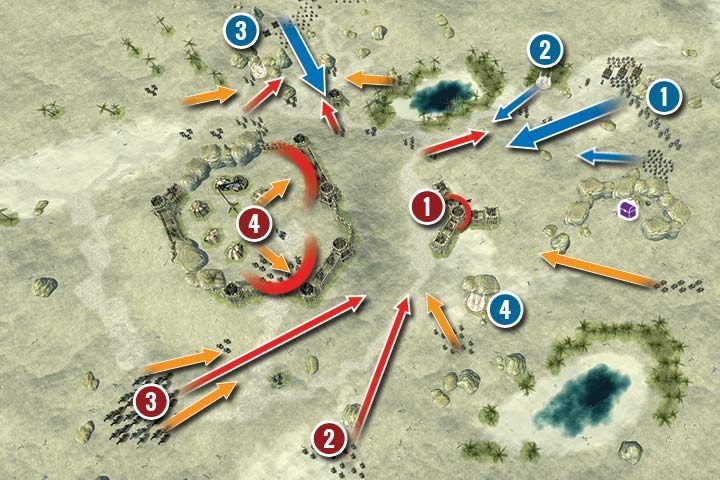 The situation on the map looks as follows. Your main army, consisting of Cavalry, Crossbowmen and Catapults, is located in the east (1). Next to it you can find a teleport (2) that can be used for summoning additional units. Down the map you can find a chest with useful scrolls (Fire Rain and Soul Weapon). A Dwarven army is located in the north (3), remember that you have a full control over it. You should move it to the east part of the fortress because this army has useful siege units. Also, the map has an additional teleport (4) that can be used later. Your goal is a quick destruction of the small fortress located on the outskirts. After that you must join your army with the Dwarves. Only then you can stand a chance against the reinforcements that will arrive from the south.

The enemy has a small fort between their main stronghold and the forces in the east (1). Try to eliminate its defenders and fill it with your troops to get a huge advantage. Remember that other units can't get inside and attack enemies on walls if there is one unit on a tower with a ladder. You can also place your Mages behind the fort's walls so they can damage enemies while staying out of trouble. Orc reinforcements, in a form of Pikemen, approach from the south (2, the arrows point the direction of their attack). Also, the enemy hero and Cavalry will ride from south-west (3, they also ride towards the small fort). None of these armies have ranged units. This means that capturing the small fort and placing Dwarven Cannons is important if you want to win this battle. Fire Rain is great against Cavalry because they have less than 100 health points. The main fortress is defended by a few Infantry squads and Archers on towers (4). These squads can often leave the fortress and attack your units, especially after defeating the reinforcements from the south. The only entrance to this fortress is located in the south part which means that these enemies will need some time until they reach you.

Playing the mission on a higher difficulty (orange markings on the map) is a bigger challenge. The small fort that is in front of the main stronghold has additional units (1). This can slow your units down and makes the allied units in the north even more important. Defeating enemies in that location is difficult without artillery. The southern Orc army (2) gets additional groups near the teleport (4). The same goes for the traitor's army (3) - higher difficulty levels add more units to it. You will need either Pikemen with Shield scroll or a lot of ranged units.