You receive another mission during which you have to recapture a previously visited location. Your friend's location is upgraded with walls and towers. Also, there is an allied Dwarven army that will help you in battles. 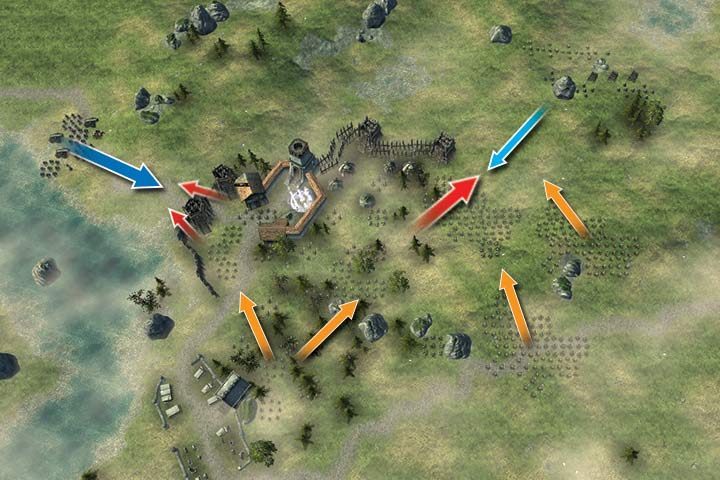 The mission starts in the west part of the map and you get access to a rather large army. Your goal is to capture the buildings near one of the roads (the big blue arrow). You can use the teleport that is between the buildings and attack your enemies from behind. For now, you should summon only one unit, a Mage, and then place him on a tower. Do all of that during the same turn. Melee units won't be able to hurt him and this place is outside of enemy Battle Mages' reach. Your Mage will be able to hurt anyone who gets in his range. You can also summon an additional Infantry unit. However, you should synchronize summons with attacks of your main forces on the target. 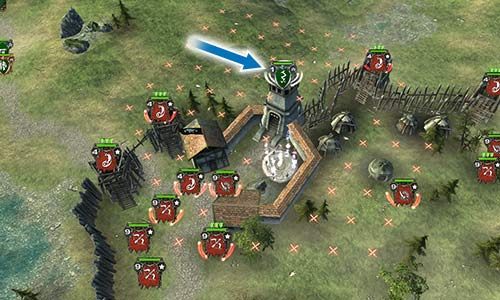 Summoning a Mage by using the teleport inside the base and placing him in the tower (the blue arrow) is a good move. He can damage and freeze enemies but no one can't hurt him.

Your attack on the western gate should be done with determination. Battle Mages, located on the towers (the small red arrows) are your biggest threat. Use the Mage in the tower and another hero, also a mage, to freeze the enemies inside the towers. Now, move the artillery and finish the enemy off. Move the hero and the rest of your units closer to the gate to eliminate enemies approaching from inside. After that you can call more units if you need. It is time to deal with the enemies in the east.

Most of the enemy units on the other side of the tower will attack your allies (the big red arrow). The Dwarven army starts marching towards the Goblins (the bright blue arrow). On normal, they should be able to handle themselves throughout almost the entire mission. The Dwarven hero is rather strong and has potions.

Playing the mission on a higher difficulty (orange markings on the map). There are additional groups of enemies. They are in the forest located south from the tower. Attacking the defenders of the tower triggers them to charge at you. They are slowed down by the forest but they have a lot of units. What is more, two big enemy groups will join the Goblins in the east. These new groups will attack your allies. The Dwarves don't get more units here which means that you have to help them and cooperate. Don't waste your time and, if you can, go around the fortifications by moving north and join the allies.