Time to go back to Rauenborn and free the village from Goblins. The village is now fortified with walls and new towers. Also, you get support in a form of Dwarven Cannons. Take your time to plan your attacks and use the artillery wisely because there are many enemies beyond the walls. 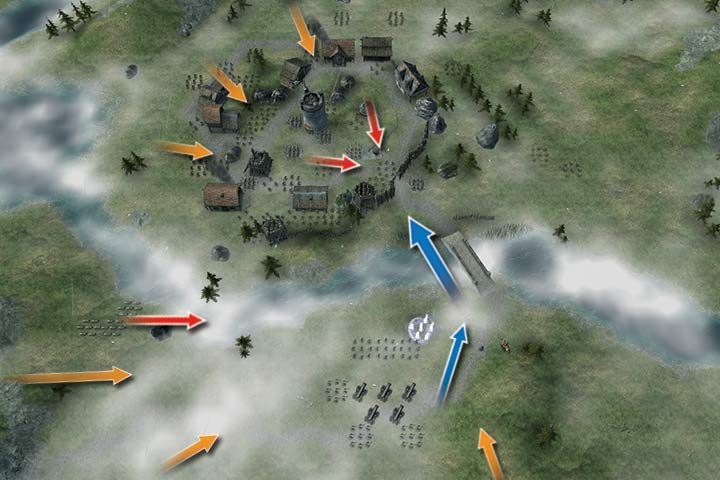 Your army is located south from the village, near the teleport. You get access to 5 Dwarven Cannons which means that you should summon Infantry, Cavalry or, at least, one Mage. Melee units are useful for breaking through the forces on the bridge and fights inside the walls. Wait for the Wolves on the left to attack (the red arrows west from the teleport) before you start marching on the village (the blue arrows). These three units can become a threat once you focus your attention on the village. Firing from all Cannons should deal with them without any problems but you have to keep an eye on the Wolves' range of moves. After that you have to place the Cannons in a spot that would allow them to defeat both the Archers on the outer towers and the incoming Infantry. Then you can start marching on the village.

The village is full of enemy Infantry and Archers. Getting closer to the walls triggers the enemy to counterattack (the arrows inside the village). You should send the most resistant units, e.g. Infantry to receive damage and keep enemies distracted so they won't attack your ranged units. This can also be done with your hero. He can sustain a lot of damage if you cast Shield (damage reduction) on him and equip this unit with Regeneration. Then, you can use Cannons and Mages to destroy units that are fighting with yours. A Battle Mage is inside the tower that stands in the middle of the village. You can defeat him only by using spells or ranged units. Freeze him or defeat in the first place because he has a great range and his attacks ignore terrain obstacles.

Playing the mission on a higher difficulty (orange markings on the map). This can cause you a little bit more problems. The beginning of the mission is almost the same. First, defeat additional groups of Wolves in the west and in the south as well as a few Battle Mages in the south-east. Additional squads are stationing both inside and outside the village. Reinforcements are located in the north-west - they start moving towards the village once you start fighting inside it.