In this scenario, you have to defend the fortress that you've captured a few missions before. You will face a united offensive of orcs, rebels and goblins. 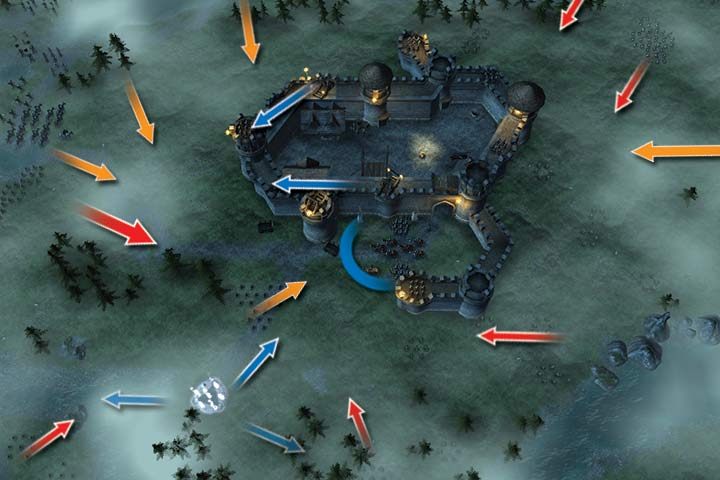 In this scenario, you will control an additional hero again. There are quite a few defenders on the walls - including a few catapults. Try to swap the crossbowmen on the western walls with some catapults right off the bat. This will let them destroy most units with a single attack, which will be useful since there will be more enemies (the big red arrow) coming from the west. The crossbowmen from the eastern walls can stay there. You might move them into turrets, though - they will get additional defense and attack bonuses.

There's a portal below the castle and you can use it to reinforce the defense. Summon additional ranged units to strengthen the garrison. You can also call in cavalry and attack the archers. Summoning the mages is another good idea, since you will stop enemy units that are crossing the river and moving along the road. A handful of units can stop the whole offensive, if they're used the right way.

Playing the mission on higher difficulty (orange arrows on the map above) means you will have to face more orcs, who are almost twice as resilient as either the goblins or your men. The greatest enemy reinforcements will come from east and west, so you should consider reinforcing your army with ranged units rather than infantry. The attacks of mages ignore the walls, so you can place them inside the castle.