It's time for revenge. The attack on the elven fortress won't be easy though - it's quite big and was built on a hill. The elves are master archers, too. Almost all their units are ranged. However, the dwarves will aid you in this mission. 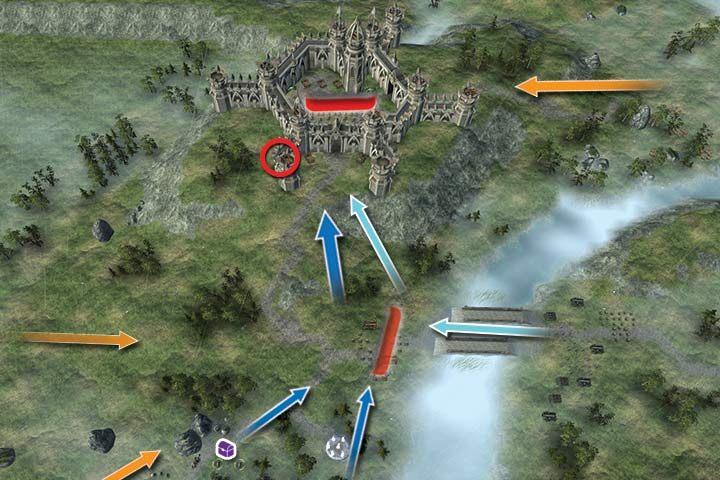 Before you attack, you will have to destroy the vanguards. The ballistae guarding the bridge are preventing the dwarves' offensive. In order to defeat them, you can try to open the chest and summon skeletons near the enemy artillery with a scroll - that should solve the problem. Alternatively, you can summon mages to the nearby teleport and attack from the tree line, or use the Rage scroll on them. From now on, the attack will be easier and you should be able to avoid greater losses.

After you destroy the enemies near the bridge, it will be the time to storm the castle. The dwarves will slowly make their way across the bridge - synchronize your attack with their march. The one unit that you really have to look out for is the ballista inside the front turret (the red circle). Again, use mages, skeletons or Rage on this ballista. After you get rid of it, the attack should be much easier.

Playing the mission on higher difficulty (orange arrows on the map above) means more defenders inside the castle and also waves of reinforcements. The elves will get up to three groups of auxiliary forces. First off, take care of the group at your back, on the south. Then watch the group in the west. The last one will enter the fortress from the east.