This is the first scenario where you will be attacking a castle, which will obviously require a new approach. You'll have to siege the stronghold, but you will also get some appropriate units. There's no time limit, so don't rush and think your moves through. 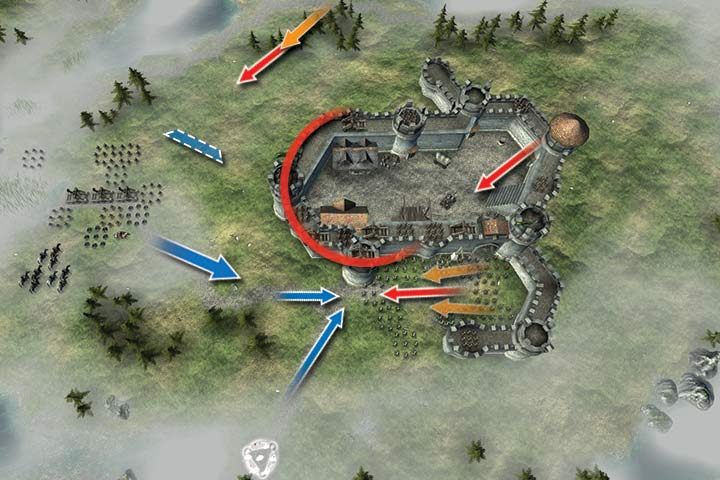 You begin near the castle, on the west side. There's a single portal in the south, which may make things difficult. The most important units of your army are the three catapults. They're very powerful and have greater range than the crossbowmen. Use them to eliminate the troops on the walls or to respond to counterattacks. At the beginning, approach the walls slowly and start eliminating the crossbowmen (the enemy's main defense line is marked with the half-circle); a small group of cavalry will attack from the north, the troops from the gate will mount an offensive against you, and some crossbowmen from the walls will switch their positions.

The most powerful units of the enemy will also be the catapults. There's a simple solution to that, though. You can use the Lightning or Fire Rain scrolls, summon the Undead on the walls or use Rage on the catapults. Another - more reasonable solution - is summoning a Battle Mage, who can disable or even destroy the catapults. In the mean time, approach the walls with your troops and eliminate the remaining forces and crush the gate.

Playing the mission on higher difficulty (orange arrows on the map above) will require you to fight against a much greater garrison and some additional units of cavalry in the north. Each difficulty level increases the number of catapults on the walls, especially on the west side. The Fire Rain will be particularly useful for eliminating large groups of enemies, even despite their defense bonuses. Before you commence the main attack on the castle, wait until all the units from the north and from the gate strike at you.