Treason! Your allies have turned against you. The situation looks dire, but some reinforcements are waiting nearby. The enemy hero has to be wounded - only then will he escape the battlefield. After that, you need to kill all enemies. 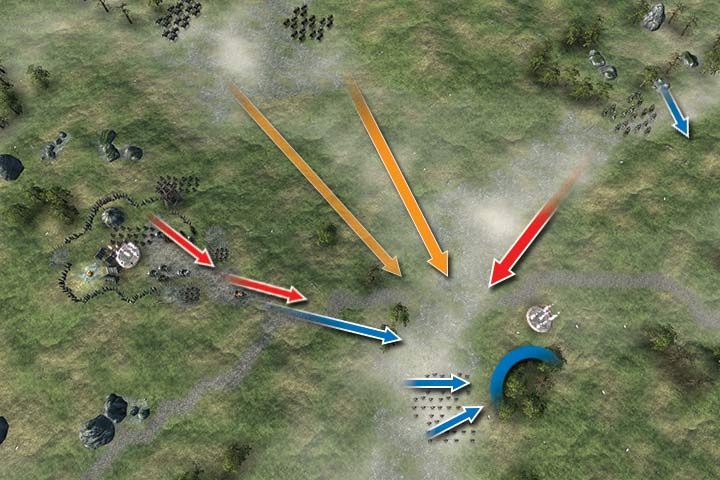 Your hero begins this mission in the enemy camp. On normal difficulty, you will be able to defeat the whole garrison. Summon 2-3 infantry units, preferably pikemen. They will defeat the cavalry, but will soon yield to enemy crossbowmen. Use the infantry to attack their positions, but mind you that you cannot engage in melee combat with the crossbowmen on turrets. After you retreat from the camp, the enemy will begin chasing you (red arrorws). Use this situation to face them in an open battle.

To the east, near the camp, there's a portal and some troops of yours. Soon, they will be attacked by enemy riders from the north (the red big arrow).. Place pikemen at the front and crossbowmen behind them. Try to create a tight line of defense.

Playing the mission on higher difficulty (orange arrows on the map above) means facing additional cavalry from the north and more crossbowmen in the enemy camp. You should try to retreat from the camp and face the enemy near the forest, below the eastern teleport. You can summon some additional cavalry to deal more damage to the ranged enemy units. Make sure your pikemen are in the forest. They will get a defenses boost as well as increased resistance to enemy charge.