Another defense mission, but this time you have to face Orcs, resistant and powerful enemies. This mission will be a small test of your skills. 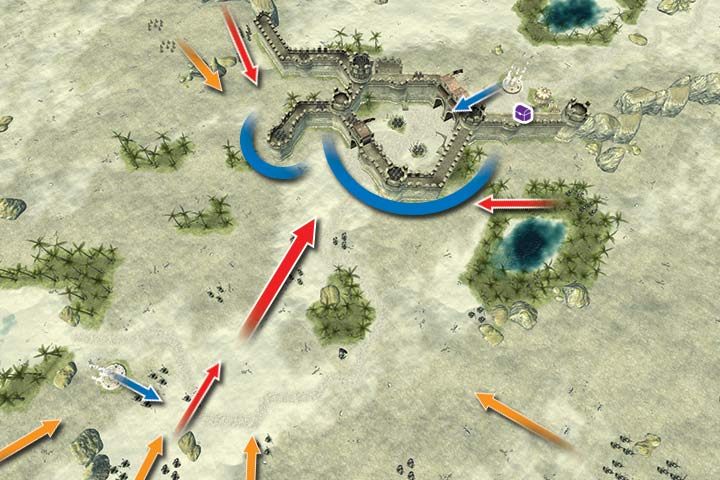 The map has two teleporters (the blue arrows). You can leave one or two squads and summon them in the later part of the game. Order all your Crossbowmen to take positions on the wall around the gate's entrance but you should also make sure that they can quickly shoot enemies inside the walls. Orc units are resistant and well-armored but they aren't that numerous. You can use a Mage who can slow enemies down.

Their main forces approach from the south. However, Orcs will also come from various directions (the small red arrows). Their heavy infantry is hard to defeat so use the Rage scroll when they get near their allied units(the big red arrow). Orcs have a lot of spearmen which means that attacking them with Cavalry isn't a good idea. The best way to defeat them is to use ranged units. After a few turns, enemy reinforcements will approach from south. It is time to use the second teleport to summon Infantry or Cavalry to eliminate enemy mages. The Orcs' hero will be the biggest challenge here. He likes to attack gates - use this information and keep dealing damage to him. He has a lot of health points and strength so use all nearby forces to stop him.

Place your Crossbowmen around him and shoot at the Orc hero when he gets inside the first part of the castle. This position is good for you because your units can shoot both inside and outside the castle. Again, enemy units like to attack gates. Use Infantry that is inside the castle to eliminate foes.

Playing the mission on a higher difficulty (orange markings on the map). Goblins join in the fight. They will come from the south. If you summoned any units by using the southern teleport then you must get them back to the castle as fast as you can.