Once again, the task will be to protect the villagers and evacuate the settlement. Even though the objectives say you have to flee south, you will still need to defeat all enemies to finish this scenario. 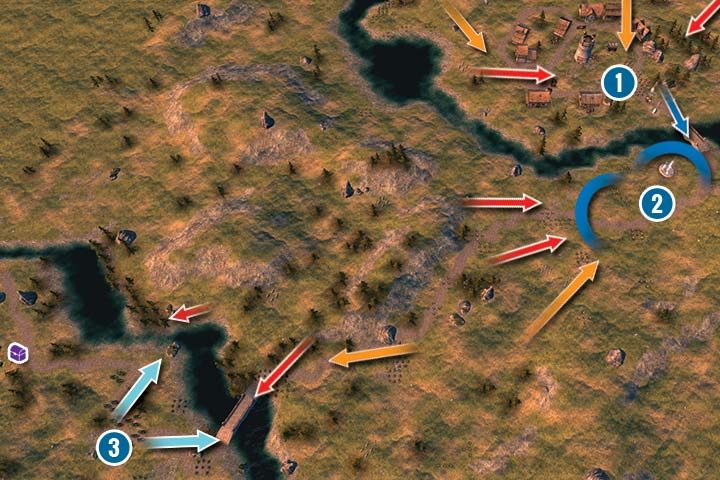 The scenario begins in the village (1), where you have three Militia units and two Crossbowmen units. The first task is to get everyone to the other side of the bridge (2). In the south (3), you have some reinforcements. If you're playing on normal, they will be able to survive on their own (the red arrows). Near that army, there is a chest containing scrolls (Angel Shield and Raise Dead), but don't bother - getting there would take a couple precious turns. When you have all your men at the teleport, there will be two alternatives for you to choose from.

The first one is to summon as many cavalry units as possible and deal with the enemies across the river (south from the village) while digging in at the bridge with infantry (after crossing it). This will allow you to fight sparse enemy forces coming from the north while your strong units crush the goblins.

Another way is to exploit the faults of artificial intelligence. If you summon a Battle Mage, wait until the enemies start crossing the bridge and then freeze the unit at the front. The enemies will have no other choice but to search for an alternative way across the river in the west. This will allow you to focus the battle on a single front.

Playing the mission on higher difficulty (orange arrows on the map above) will be a bigger challenge. There will be many units coming from the village. Your ally should still be able to hold the enemy offensive, but you should consider helping them. The allied hero has good attack and many healing potions. Blocking the bridge with a mage may be very useful during a retreat to the south. The Fire Rain scroll will be most useful, but make sure to use it on a group of no less than 3 enemy units.