During this mission you have to defend a castle from hordes of enemies. You will get a lot of support units. This mission can be completed on normal difficulty without summoning additional units. 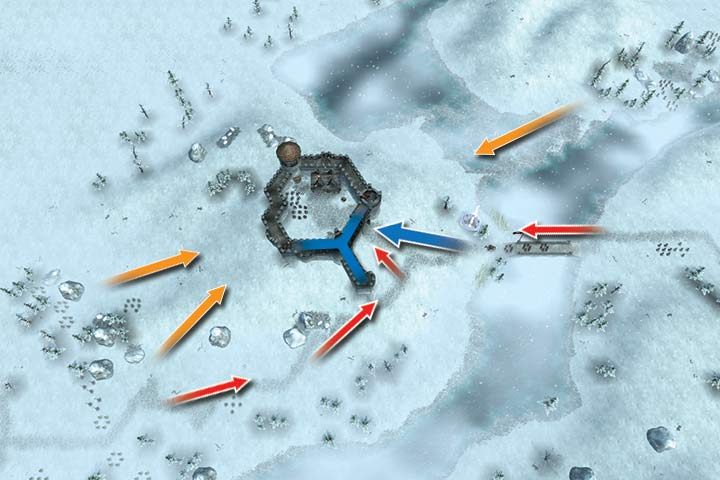 At the start of the scenario your hero and three crossbowmen squads stand on a bridge. Head to the castle's gate immediately and order your crossbowmen to get on the walls. If you need, you can summon additional squads, preferably ranged units. You can also take a risk and place cavalry/the hero on the bridge, the one on which you started this mission. Single squads are easy to defeat. You can also place a catapult but this is an expensive solution. On the other hand, a catapult can easily defeat Goblin units and stop the invasion from the east.

Enemy's main forces will approach from the south. Place as many crossbowmen squads on the southern wall as possible. Remember that squads can't clip through each other while they are moving on a wall. If you want to order a squad to retreat then you need to move others from their path. Walls provide damage reduction and they grant you a better range and damage. You should place most of your army in the southern part of the castle. The enemy heads towards the gate but you can easily stop them with your bolts.

Playing the mission on a higher difficulty (orange markings on the map). Expect additional squads from north-east. They will go through shallow water. The largest army will approach the castle from the west. You have to place your units on almost the entire wall. Because of that you should call more Crossbowmen squads.