You will be able to use a few simple solutions during almost every mission. Here are some ideas that ought to make the gameplay go smoother and help you understand the basics of commanding your soldiers.

Get rid of smaller groups first 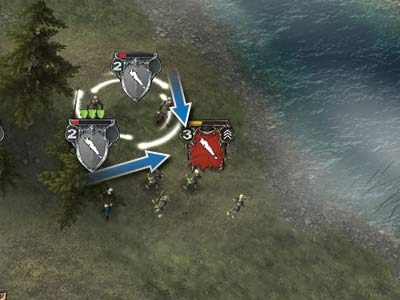 Finish off weaker groups of enemies, especially when your own soldiers are not faring too well. Remember that a unit smaller than 3 soldiers gets damage penalty.

When the enemy is attacking with a big group and one, single unit, try to finish of the weaker groups first and only then attempt taking down the stronger enemy. At the same time, avoid staying in their range. Mages will be very useful here, as they are able to slow them down or disarm them for one turn, while the rest of your units can take care of the weaker enemies. If you do the opposite, and start by attacking the most powerful enemy on the field, your units will lose much more health and won't be able to tackle the remaining forces. 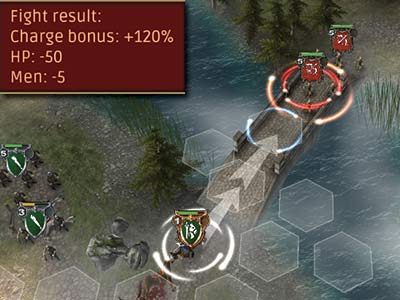 The cavalry is most useful in open spaces and a bad choice during sieges and in forests. When commanding cavalry, remember to attack in a straight line from a few hexes away. If a cavalryman gets stuck in melee combat, retreat 1-2 fields to be able to charge at the enemy. This will let you utilize the potential of this unit to the fullest.

Archers to the turrets! 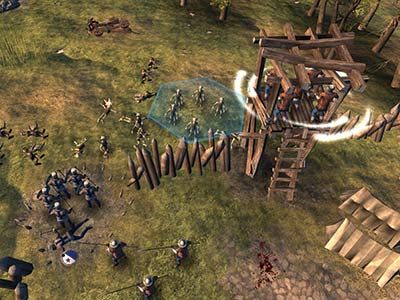 Ranged units get bonus damage for elevation advantage - if they're higher they have better range and deal more damage. The best bonuses are provided if they're on walls or turrets. Such structures also reduce the received damage. The catapults should be placed on the highest points of the map, which will significantly increase their range. Remember that your units on walls cannot go through each other.

Use the forest and walls to block the line of fire

Environmental obstacles can be very useful in blocking enemy bowmen. Use that to your advantage -let walls or forests protect the flanks of your units. This may prevent you from suffering bigger losses before engaging the enemy. Entering a field with forest costs more movement points - this can be of advantage if you're defending. 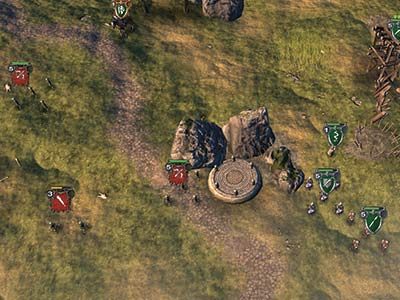 Not only are the units small, but they are also dispersed - this is the best moment to attack.

The units in Hex Commander don't automatically respond to being attacked - the best idea is to attack small groups and finish them in a single turn. This prevents them from damaging you later on. Superior numbers are very important, so make sure that you always have more (or at lest the same number of) units. Attacking bigger groups will always mean greater losses. If you can't make it, use the environment to your advantage and always keep an eye on the enemies' range. Plan your actions so as to prevent enemies from approaching your positions. You can also use the scrolls and weaken the enemy, but it is not always possible. 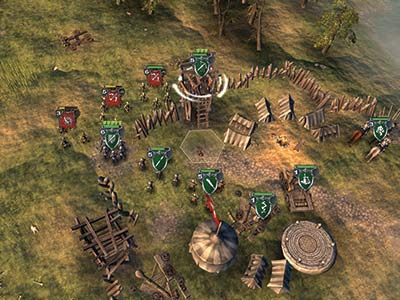 Infantry guarding a narrow passage, ranged units on turrets and at the back - this fort won't yield easily.

In some scenarios, you will be tasked with defending a castle, for example. Get as many ranged units as possible. Place them on the walls and turrets. Focus your men on the part of the wall where the gate is - that's the only place where the enemies can pierce. You should have 1-2 infantry units to guard the entrance in case the gate is crushed - they can take more damage in melee combat. Ranged units should cover as much ground as possible.

In other scenarios, such as defending a village, try to diversify your army. You should have at least one cavalry unit. They will be able to move quickly and deal tremendous damage. If you're protecting a unit, then surround it with your army. If you can, choose narrow passages - such as a bridge - and use your strongest units to repel the attacks. The best choice is often the Hero, who will have the most health, movement and attack points. 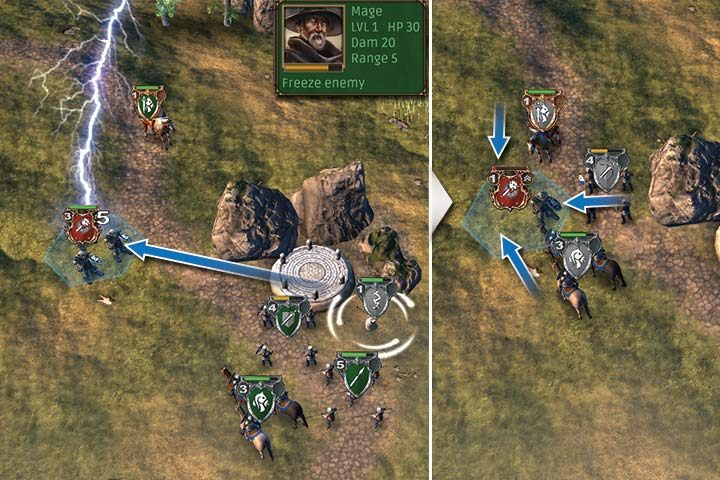 The Mage prevents the heavy infantry from - and then the rest of your troops finishes them off.

Batlle Mage is a special unit that can prevent the enemy from moving or attacking. This effect is randomly applied after an attack. This is the perfect unit for stopping and weakening the most powerful units, such as cavalry or heavy infantry. What's more, the mage can attack enemies from a distance and ignores obstacles that normally stop projectiles. When it comes to disadvantages, Mages have poor health and are only effective after a few upgrades. You should recruit them after summoning a few regular units.