Hex Commander is a rather straightforward game, but you'd best remember not to do certain things.

Do not fight against big groups of enemies! 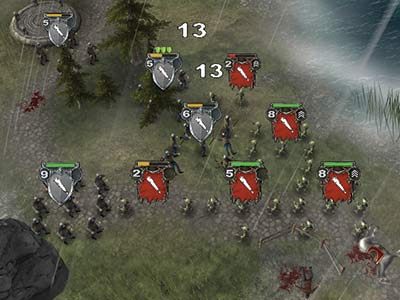 The casualties among the militia are high - the decision to attack was a mistake.

Your units have no way of blocking an attack; most units in the game have similar health levels. You need to utilize the advantage that the environment provides as well as use your units' skills properly to win. The greatest mistake you can make is miscalculate the enemy's power and attack groups of enemies that are too big for you.

Do not upgrade only a single unit!

At the beginning of the game, you should unlock more types of units and, if you can, upgrade each of them to level 1 or 2. You will soon realize that relying on a single type of unit too much is not only ineffective, but can lead to a defeat - for example if you use cavalry during a siege. Make sure you have at your disposal a great variety of units for each mission and bring in units that fit the given situation. For the same reason, you should maintain an even level of upgrades across all your units - in time, you will know yourself which of them should be upgraded in the first place.

Do not convert coins into gems!

Gems are the most valuable currency in the game. They let you upgrade buildings and units, which is necessary further on in the game. You might feel tempted to convert a few gems for a heap of coins, but that's not a good idea in the long run. The further you get in the game, the more difficult the gems will be to come by. New missions become more difficult, and replaying the previous ones offers new challenges. Besides, the coins get easier to obtain - after you buy a unit, conjuring them to the battlefield won't be that expensive.

Do not use up all your potions and scrolls! 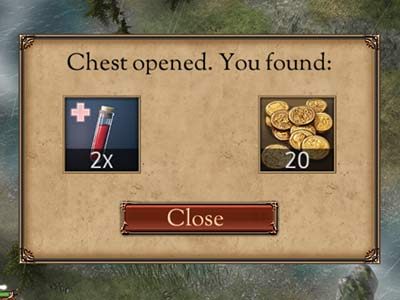 The chests contain useful potions and scrolls. Make sure you use them for a good reason!

You might be tempted to keep the hero's health as high as possible at all times - just as you might feel tempted to destroy enemies with powerful scrolls. However, these items should be used as last resort - at moments when they can mean the difference between victory and defeat. Collect these items from chests and buy a stock of potions and scrolls after purchasing new units. You can sell them, but it's generally inadvisable, unless necessary. Don't start the game with upgrading the potions and scrolls building. The gems should be used elsewhere at first, especially since they become more expensive in time. You will find that using the potion or scroll at the right moment can help you snatch the victory from the clutching fingers of defeat.

When playing missions for the first time, do not use the high difficulty level

Every mission played on difficulty higher than normal is a serious challenge. Especially at the beginning, when you don't have a strong and diverse army. When you're starting the game, you should do missions on normal difficulty and gradually expand your base. If you get stuck in any mission, go back to the previous one. This should allow you to create a more powerful army that will be able to defeat more challenging opponents. On higher difficulties, the location of enemy forces remains the same; what changes are their numbers and levels of experience.