Heroes of Might and Magic V: Hammers of Fate Game Guide by gamepressure.com

Heroes of Might and Magic V: Hammers of Fate Game Guide

The next mission is very schematic. I mean more than usually. Your task is to dash across the entire map and kill and destroy everything what possible. It is second time when we have no castle. 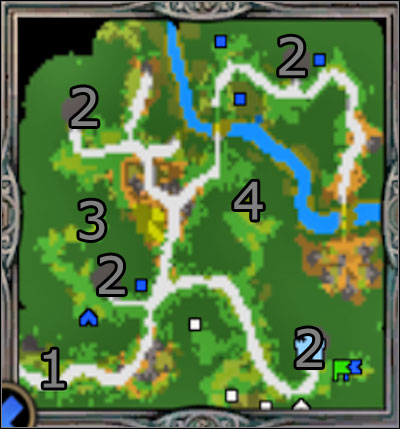 Hero: Take gold instead of experience out of all treasure chests. Freyda may reach only 16th experience level and she will make it easily only fighting. I advise to develop only Logistics and skills connected with knowledge/intelligence in this scenario for faster experience getting.

Bonus: Before mission beginning choose 10,000 gold as a bonus. It will be useful when recruiting new units. The artifact is weak, and Blindness spell won't be needed.

You begin mission in then left bottom map corner (1). Defeat few peasants and go along the west path to first of four rebel's cities (2).

There is a Pit Lord waiting for you in the depths of the forest (3). He is quite weak so he should not cause you many problems. However he guards the precious artifact, which is the Axe of the Mountain Lords. It adds 4 points to hero's Attack.

Go to the east. Destroy the next castle at the end of path, and in (4) a Fort is found. Entire gold will be useful now since improving units isn't cheap. With that kind of army the rest of mission will be piece of cake.

Right behind the first bridge, in the north, there is a Garrison. Defeat guards and you will be able to recruit Griffins, Cavaliers and Priests (little weekly growth, but always something). 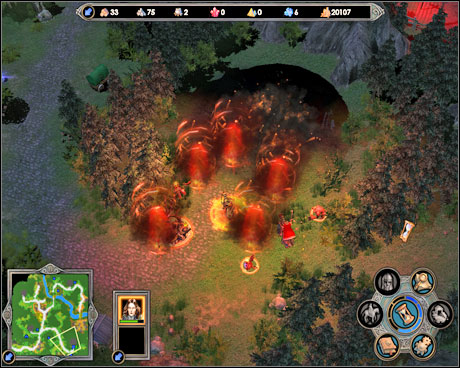 An army of demons will appear after completing all aims. Don't be afraid. It is a harmless, small unit.

After completing the secondary task (rescue five peasants) all Freyda's statistics will be increased by 1. And after destroying four cities, destroying all peasant huts and defeating the last army of demons you will end up scenario victoriously.

Heroes of Might and Magic V: Hammers of Fate Game Guide is also available in our Mobile App
FREE IOS APP