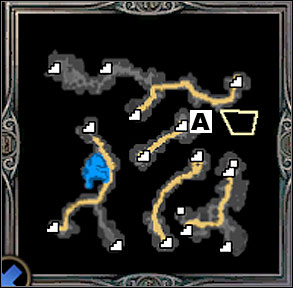 Time is quite important in here, because the monsters guarding all the artifacts grow in numbers day by day. The red player's army, however, doesn't expand.

Go to the Northern part of the island and enter the dungeon. Turn South at the junction and go back to the surface using the exit there. There are recruitment points in the Northern part of the island you're on now. Go back to the dungeon and follow the yellow path to another exit. Here you'll find a forge, a recruitment point and an upgrade point. Go back to the dungeon and use the corridor next to the teleport (it's easy to miss that spot, as it's quite dark in here). Go Southwestwards. When on the island, head East. Defeat the three Demon groups in there and you'll win yourself the first artifact (A), Pendant of Mastery. 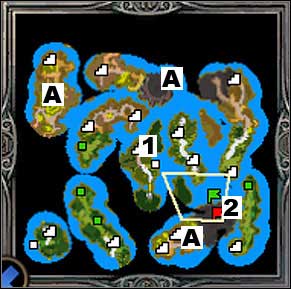 Go back to the underground corridor and follow it to reach another island. Reach the Dragons guarding the second artifact (Unicorn Horn Bow) (A) from the South.<br> 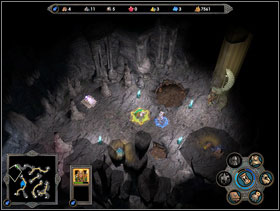 A teleport will help you back.

When back under ground, follow the yellow path to the next exit. There's another dungeon entrance on the island you'll find yourself, so use it and head South to reach the next island. There's a big recruitment here up North of this land. Back in the dungeon head West and exit to the surface. There are Dragons (A) in here, guarding the third artifact, Ring of Vitality. Go West. On the next island go North again and enter the dungeon once again. The last artifact (A) is past the entrance. Use the only way out to find Tieru (1). Agree for the nearby Unicorns to join you.

You can't really 'complete' this quest, as Tieru ends up dead whatever you do. If you developed you hero in a way that he now has teleportation ability, you can try to use it to destroy both enemies. It won't change the outcome, though. Attack the red units on the way. Kill them both and talk to Tieru's ghost.

Find out why Tieru was attacked.

Board the red ship and sail Southeastwards, to destroy the second red unit (2).

This mission is probably the toughest in the whole game. Save your progress often and be prepared for trial and error. You have to be quick, not to let your opponent regain his strengths.

How to fight: When you confront the blue units, along with Nicolai, use "Imbue Arrow" together with some destructive magic. The most useful spell here is "Phantom Forces" that lets you multiply your troops. Try to use some massive destruction magic as well, and keep as many Master Hunters among your ranks as possible. In order for Phantom Forces to work, there must be an empty spot next to a unit you're casting it on. Casting that on a few hundreds Master Hunters can make your day! You can also achieve a lot by having Findan cast Phantom Forces on ranged units hidden behind a wall of Treants. 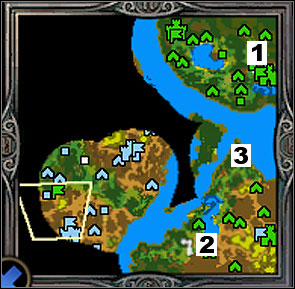 Capture the mines around your cities, trying to do that as fast as possible. It's best to leave your territory during the second or third week. Visit the lookout point between your cities to see where the six groups of Spectral Dragons await. You'll have to kill them along the way. You can leave the ones on Nocolai's territory, though. You also don't have to visit all the obelisks.

Defeat the garrison (1) and go North to the teleport, which will lead you to the South-Eastern island. Be sure to visit the seer's shack (2).

There's a teleport that leads to the underground on this island (3). Before you proceed, look around the island. There's a strong hero in here, you can beat him as long as you do it fast, before he gathers more troops. If fighting him still seems too hard for you, try the following trick: send the supply hero to the Western part of the island and lure the enemy there, and after a turn or two move Findan into the teleport to the North. The second hero can escape using the second teleport, and Findan won't be caught due to the enemy's delay. This way you don't get to control this island's city, and it certainly comes in handy later on.

The troops from this island won't use the teleports, so you don't have to think about defense against them. Findan should summon Sylvan units to himself. Before you leave the island, take time to capture the city to the South-East and kill the Spectral Dragons, which guard the useful artifacts to the South. One of the 10-level heroes should collect the undead army from the enemy cities and follow Findan. For now, this army can help you finish off lesser bests on your way, so you don't have to risk Sylvan units' loss. 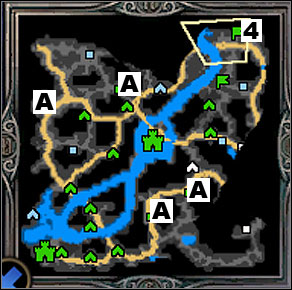 When in the dungeon, defeat the garrisons guarding the dwarfish artifacts (A). These are: Dwarven Mithril Cuirass, Greaves of Dwarven King, Dwarven Mithril Shield and Dwarven Helmet. You can speed things up using the teleports here and there. Capture the cities in the middle and in the South-West, and use their units to support your second army. Capture all the enemy mines along the way. 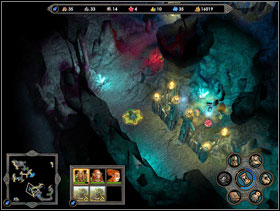 There are other treasures near each artifact.

Show the artifacts to the seer.

Get back to the seer, and you will exchange your artifacts for 5 Phoenixes. It's essential that you do that!

In the North-Eastern part of the dungeon there's an exit to the surface (4). You shouldn't use it if you don't have the Phoenixes with you. Save your game after using it. In there, regenerate your mana. Nicolai is nearby, so watch out for him. If Findan isn't able to beat him by himself, first attack him with your support army (it doesn't matter that your second hero dies), and them immediately use Findan's main forces. The supply hero shouldn't have any artifacts on him, so they don't fall into enemy's hands. With each passing week, Nicolai is stronger, keep that in mind. 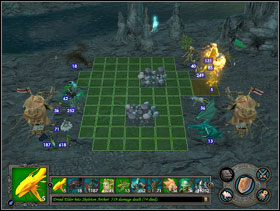 If you want to fight Nicolai just once - Phoenixes must survive.

Phoenixes must be engaged in battle when Findan is fighting, but it's best to have them standing in the corner - at least one must survive the battle. If at least one is alive when you win, the mission is over. If not, you'll have to beat Nicolai over and over again, until you catch him in one of the cities. Try to keep the Phoenixes alive!