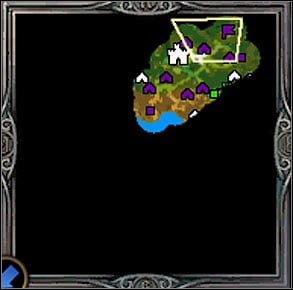 Prepare for the tournament.

Raelag has a city at his disposal and a small territory with mines to capture. You've got a month and two days to get as many units as you are able. When the time comes, the hero together with his units and artifacts will be teleported to the tournament area. Go through the portal and defeat your competitors. 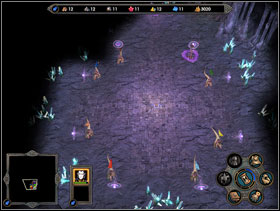 The green player is the strongest one.

It's good to wait for the enemies to fight each other, so they are weakened. When you win, go North to get the ring. 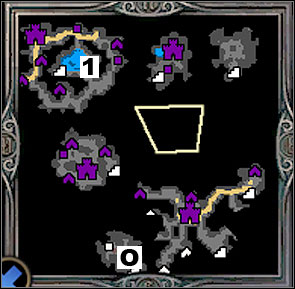 Follow the path South, capturing the mines along the way. Enter the seer's shack (1) and talk to Malasara. To the left of the tent there's an exit to the surface. Look for some recruitment points and mines around here. The red key master's tent will let you open the passage to the teleport, which will lead you to Elemental recruitment point. Watch out for the enemy unit that's entering the dungeon, you'll have to battle it. Go to the surface and to the West. 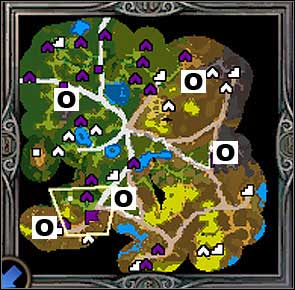 Build the Mother of Darkness in Virbeth.

You have to find six obelisks (O), which will give you map pieces. One of them can only be reached through a teleport near the place where you entered the surface. Take time to weaken the orange player whenever you have the opportunity. The Tear of Asha is hidden in a random spot. When you get it, go back to your first city and confirm the building order. 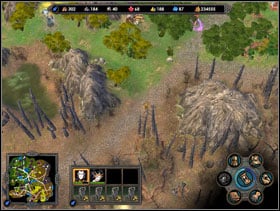 A hole in the ground indicates the spot where the treasure was.

Defeat the nearby orange Garrison.

Go to the underground using the Northern passage and capture the city there. Notice the recruitment point nearby.

While Raelag is busy capturing next cities and finding the obelisks, Shadia should take her place at the crossroads (3) and attack any orange hero that tries to get past her. It's worth to hire a supply hero in every new city to defend it and visit the nearby recruitment points. 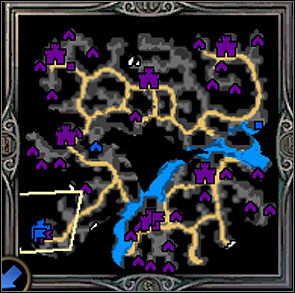 Capture any city within a month.

Raelag and Shadia must survive.

Between the two cities there a lookout point that will let you know when the red heroes are coming. Each of them uses the Southern passage. You'll have to get rid of them all. The last one will appear after 4 months.

During the first week all you can do is defend, as the blue player is attacking you from the North-East and the South-West. Expand your cities as fast as you can, constantly recruiting new units. When the situation is secured, leave Shadia to defend your land and use Raelag to capture the blue player's cities. The way to the furthest of them, to the North-West, is additionally guarded by a strong Garrison. You can cross the map counterclockwise and first capture the other one. 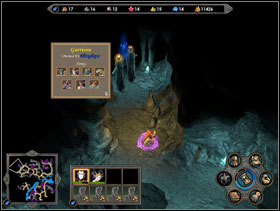 There are no unbeatable units in this mission.

The teleports nearby help you travel the dungeons faster. To finish this scenario, you don't even have to go to the surface.