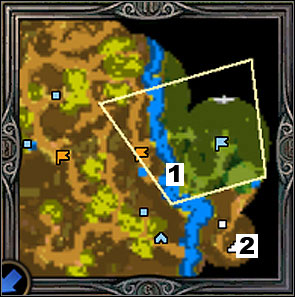 Reach the borders of the Empire.

There are two orange units wandering around. From time to time, they return to a point to the North-West. You have to watch their movements and move so you don't get caught by them. On the left side of the river there are three recruitment points, and a mine to the South. The best way to cross the river is at (1). To get there, you have to follow the path to the North. Assemble as much units as possible to this point, as you won't be able to go back for them. One of the orange units will start to follow you, so be quick. Go to the dungeon entrance (2). 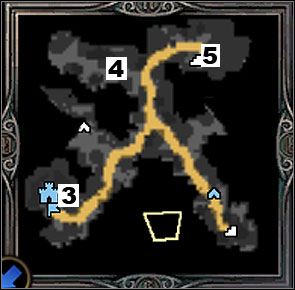 In the dungeons, capture the mine near the road and turn left at the first crossroad, to reach the city (3). Take your time in there, build it up a bit. The orange units will be defeated by the violet army, which will attack you in your city. Be ready to defend yourself. When you win, gather your armies and go North. Defeat another violet unit (4) and leave the dungeon (5). Attack the army there. 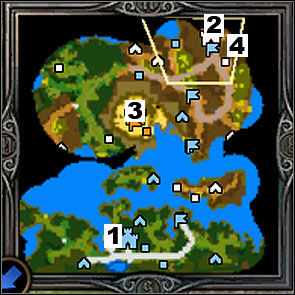 Markal and Godric must survive.

Capture a shipyard East of Newpost (1). There are Giants there, but fortunately there are few of them. Godric should get rid of them at once, as they grow in numbers each week. Next to the city there's an Archer recruitment point - use it and Godric should manage to get rid of the Giants somewhere around the third day. In this battle, use Godric himself as your main offensive force, while other units will be weakening the enemies and win you some time. Blacksmith's equipment comes in handy, too. It's easy to get it, especially if you've chosen money as your starting bonus.

There are some orange ships to be destroyed around the sea. The city of Lorekeep is to the North-East (2). The undead along the way will surely join Markal.

There's a sandy island to the North - that's where Hikim is (3). Don't attack the garrison guarding the entrance from the beach. Build a citadel in Lorekeep, and the units securing the teleport will disappear (4). 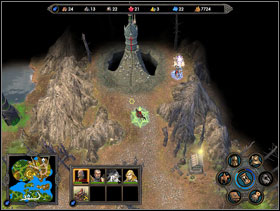 Lorekeep is an important city.

Go through the teleport and capture Hikim. 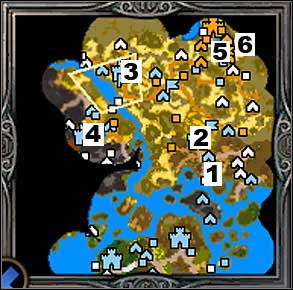 Obtain Staff of Netherworld (in Ziad).

Obtain Ring of The Unrepentant ( in Al Safir).

Markal and Isabel must survive.

Next to Newpost there's a shipyard, and East of the island - a second one. West of Lorekeep, near the recruitment point, there's a lookout point that will show you three orange player's cities - there are artifacts in two of them. Markal should gather his army and sail towards the orange player's territory. Land on the beach (1) and capture the first city (2). Watch out for the orange units wandering around the map! Should you loose the city, it won't be a problem to take it back. Don't hesitate to move Markal where the heat is.

Don't expand your necromancy, as long as Markal raises dead enemies as Skeletons. The 1000-skeleton quest shouldn't be a problem this way.

Leave Isabel by Newpost to gather army and wait. Soon, there will be a green unit on the Southern shore - defeat it. 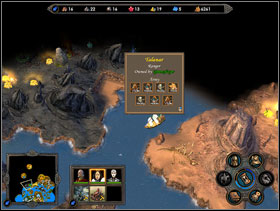 At least 2 days will pass until the green player appears.

After capturing 3 cities, expand them and train units in them. Head along the way to the North-East, defeating three garrisons in there. Reach the last city (5). 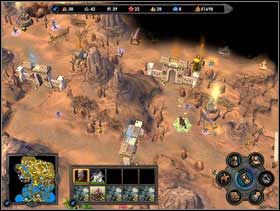 The last garrison is the most difficult to reclaim.

When you have 20 Dragons at your command, attack the teleport from the right side, below the last city (6). That's where Cyrus entered. This time there won't be any combat.