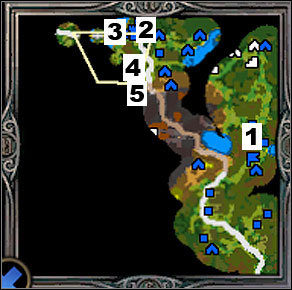 Go along the road to the North-West. There are several useful objects around the area. Take your time to reach (1), where you'll find an Archer recruitment point, an artifact shop and a building that lets you upgrade all your units. Go further to reach Brightwood (2) and capture it. Go to the post to the West (3). 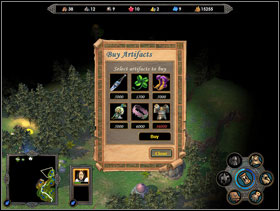 You can afford but some of the artifacts.

Upgrade the Magic Guild in Brightwood.

Build a third level magic guild in your city. The seer's shack is South of the post (4).

Go to the underground (5) and head South, to the Green Crypt, in which you'll find the boots. It's well guarded, and it's worth to have some Paladins on your side. Wear the boots and leave the dungeon. Go across the river and meet Alaron. Go further, straight into a trap. Mission complete - even though you've just made a huge mistake. 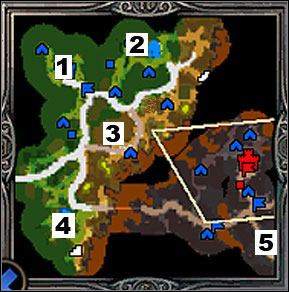 Capture any city within a week.

Isabel and Godric must survive.

Go to the North and take Dunmoor (1). Take time to visit a recruitment point and an artifact shop along the way. The second recruitment point is to the right of Dunmoor. Near the city there's a tower in which Isabel is trapped. Defeat its guards and give her some decent units to command.

After a few days of peace, there will be red units appearing on the map from time to time. You can't leave your city defenseless, so keep some units (and preferably a hero) in there. Use Isabel to get rid of the enemy units so none of them reaches the city.

Set up Tear of Asha in Dunmoor.

Tear of Asha is a treasure that you have to dig out using the special puzzle map. To see the whole map, pay a visit to three obelisks (2) (3) and (4). Take the treasure to Dunmoor and confirm that you want to construct Elrath's Sentinel in there. 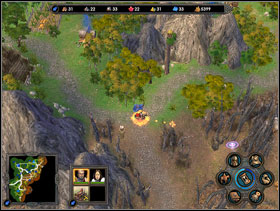 The treasure's location is random.

Isabel is escorting Godric to the passage to the South-East. Godric should command nothing but minimum number of units. Don't attack the demon city, as it's too heavily guarded for now. Defeat the Garrison's crew (5). Command Godric to go further, to the end of the map.

Godric will disappear, and Nikolai will take his place. You can't trade units with him. Agrael's army will come out of the red castle. Let Nikolai battle him.