The Heavy Rain Unofficial Game Guide provides a detailed description and walkthrough of all available chapters in the game. This is a very non-linear production and in the vast majority of the available stages, decisions and behaviors influence the shape of the game. In our guide we have discussed all important choices and moments. Also, we have included additional warnings for all scenes that could lead to the death of one of the heroes or the omission of selected chapters of the game (e.g. because not enough tracks have been collected). Our guide is richly illustrated. Important locations or items are shown on the pictures attached to the guide. Our guidebook also explains all QTE (Quick Time Events) sequences. They play an important role, because failure of the QTE scene can make it impossible to perform any action or even result in the death of the hero.

Due to the extreme non-linearity of Heavy Rain, we have prepared a special chapter with list of available game' endings. We described in detail all epilogues, i.e. TV news, the content of which depends on the choices made during the whole progress of the game (e.g. whether someone died or whether a serial killer was caught).

In the next chapter you will find a trophy guide to Heavy Rain. It contains a full list of achievements / trophies. We divided the trophies mainly according to the chapters in which they can be unlocked. However, there were also descriptions of achievements related to various decisions made throughout the game. Reading our trophy guide should help you in unlocking the platinum trophy.

On which platforms can I play Heavy Rain?

You can play Heavy Rain on the following gaming platforms:

Can I play the demo of Heavy Rain?

Right after the release The Heavy Rain PC demo caused problems for some users and made it impossible for them to start the game. This problem should be already solved.

Is Heavy Rain going to be available on Steam?

No, there are no plans for such release. All recent Quantic Dream studio games, i.e. Heavy Rain, Beyond: Two Souls and Detroit, are exclusive titles for the Epic Games Store. It is a full exclusivity, not a temporary one.

What are the PC system requirements of Heavy Rain?

Be aware of high recommended system requirements. Launching the game in the highest details or high resolutions may force you to have a strong hardware configuration.

Heavy Rain is not a type of production for which classical key bindings can be prepared. The exception is to move the characters (where allowed) using the left analog knob. In all other cases, the buttons change depending on the action.

You may be forced, for example, to press a button, hold it down, or move the controller. In the latter case, the game forces the whole controller to move, e.g. when it simulates moving objects or dodging. All such actions should be well practiced, because the failure of some QTE scenes can have serious negative consequences, including the death of the controlled character.

Can I unlock all endings of Heavy Rain in a single run?

Heavy Rain is a very non-linear game. You cannot see all the endings by repeating only the final stage of the game. Some endings become available through decisions made, for example, in the middle of the game. They can also be mutually exclusive. Luckily, you don't always have to start playing from the beginning. You can, for example, go back to a stage where an important branching occurs and continue from that point.

For more information, see the Game Endings list page and the following chapters of Epilogues. There are a total of 17 different epilogues to unlock.

Who is the Origami Killer?

The game will hide this mystery for a very long time and even try to confuse you with the events of some scenes. You'll only know the Origami Killer's identity when you play through the final stages of the game. Get interested in such scenes like Take my hand and Killer with origami.

Why a scene from walkthrough didn't launch during my game?

Our solution describes all possible stages and chapter of Heavy Rain, although there is no guarantee that you will play them all while playing the game. This is not a result of any mistakes, but a conscious decision of its developers. Access to some scenes may be locked as a result of your actions. The main reasons for skipping a scene from the walkthrough may be caused by the following:

All information about the availability of the scenes can be found in our walkthrough. 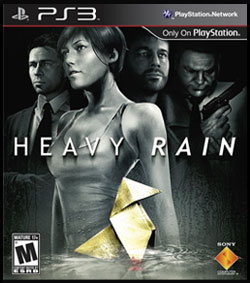 Hard to pin down, Heavy Rain is a cinematic and evolving thriller from Quantic Dream, the developer behind the critically acclaimed Fahrenheit on PlayStation 2.

Dealing with a range of adult themes, the game revolves around a sophisticated plot and strong narrative threads that explore a complex moral proposition.

You assume the role of multiple characters, with very different backgrounds, motivations and skills, in a world shaped by Bending Storylines - a dynamic narrative design where your actions and decisions will shape your story.
An evolving thriller in which you shape the story
Mature content, reflecting a realistic world setting that explores powerful themes
Stunning graphics, animation and technology support an emotionally driven experience
Accessible gameplay via intuitive, contextual controls and interface

Heavy Rain Guide is also available in our Mobile App This site is not associated with and/or endorsed by the Sony Computer Entertainment or Quantic Dream. All logos and images are copyrighted by their respective owners.