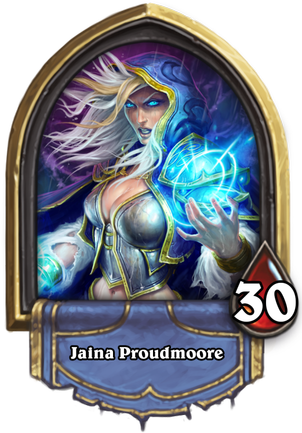 Unique Ability: spells and cards with the Secret ability

The mage is a character of vast offensive potential and a very vast control of the battlefield. The main advantage of this class is the vast array of spells and spell-buffing units. The shortcomings when it comes to the defensive units, is made up for by a big number of cards with the Secret ability and enemy-controlling spells.

The Mage's Hero Power is the Fireblast. Thanks to it, the player can deal 1 damage to any unit or the hero. It is also possible to target your own units, which harmonizes with the Enrage ability, and allows it to be activated before attacking with the given unit.

The main strength of each Mage's deck lies in the spell cards. Most of the spells are focused n dealing lots of damage to the enemy like, e.g. the Fireball (6) or the Pyroblast (10), which deals as much as 10 damage. This class also has powerful AoE spells like , e.g. Blizzard (6) or Flamestrike (7), and most of the cards with the capability to freeze like, e.g. the Cone of Cold(4) or the Frost Nova(3).

The last one of the Mage's advantages are the cards with the Secret ability. Only three classes have access to this ability and each has very useful effects, as well as helps control the course of the battle. All of the Mage's Secret cards have the mana cost of 3 but, they offer the strongest effects of this ability.