Harry, Hermione and Ron traveled by portkey to the Quidditch World Cup Final. Unfortunately a gang of Death Eaters disturbed the show. Arthur Wheasley send Harry and his friends back to the portkey.

The game begins in this place. Go straight ahead and after a while you will be attacked by dugbogs. Jinx (X) them.

Continue your way. You will get to the place, where a rock blocks the way. Together with your friends, lift the rock with Wingardium Leviosa (C) and then move it to unblock the way.

You will be attacked by dugbogs again. Jinx (X) them. You can also lift rocks with Wingardium leviosa (C) and drop them on dugbogs. You will get to the place, where you have to move another rock.

Suddenly in front of you a tree will fall. Now cast Carpe Retractum (C) on the log to unblock the way.

You will get to the point, where lots of dugbogs will attack you. Get rid of them and continue your way. Go to the bridge. Move a rock to unblock the passage.

Continue your way. After a while you will see one of the Dead Eaters standing on some rocks. Pull the log with Carpe Retractum (C) and the evil man will drop down.

Finally you will get to the place, where Arthur Wheasly is waiting for you. Go to the bridge and get to the portkey.

About Harry Potter and the Goblet of Fire Game Guide & Walkthrough

Harry Potter and the Goblet of Fire Video Game 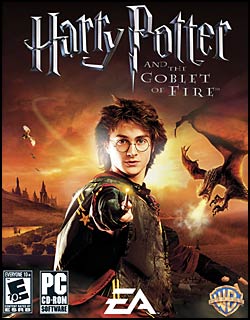 In the Harry Potter and the Goblet of Fire videogame, licensed by Warner Bros. Interactive Entertainment, Harry is mysteriously selected as the fourth contestant in the dangerous Triwizard Tournament . Each competitor in the international competition must confront a fire-breathing dragon, rescue friends from the icy depths of the Black Lake, and navigate the twisting mysteries of a vast, dangerous maze. Players can experience the thrills of the movie-from the Quidditch World Cup campsite to a heart-stopping duel with Lord Voldemort himself!
Harry, Ron, and Hermione are all playable characters, modeled after their big-screen counterparts. An all-new spell-casting system allows players to really feel the magic for the first time as the controller shakes and reacts with every flick of the wand. Gamers can team up with friends in co-operative play to combine magic and produce more powerful spells than ever before!
- All the Magic of the Movie - The magical world of Harry Potter comes to life with characters modeled after their big-screen counterparts, cinematic environments, captivating gameplay, and a compelling interactive experience.
- Bigger, Better Magic - Players explore the game's all-new spell-casting system, unleashing powerful spells to become a master of magic; feel the controller shake with every flick of the wand!
- Co-operative Play - In another first for the franchise, players can join forces with friends to navigate the world of Harry Potter, combining powers and casting spells co-operatively to create more powerful magic.
- Compelling Rewards System - Players can use "Accio" to chase down and capture dynamic living beans, as well as increase the power of Harry, Ron, and Hermione with Collector's and Creature Cards.