During the course of the game, Harry Potter Hogwarts Mystery, you have to spend seven years in the titular school of magic. You will deepen your knowledge by attending various classes. In year three, you will attend Spells lessons, Flying, Transmutation, and Herbalism, as well as, Elixirs. The knowledge you gain there comes in handy when dealing with enemies. 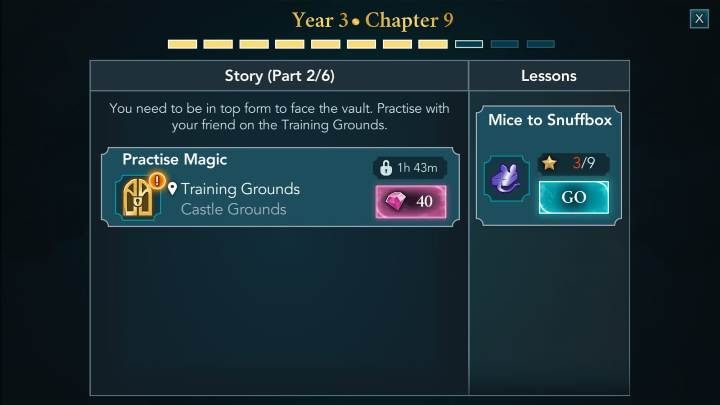 In order to develop your character, you have to learn new things. During year three, you have to get 3 stars for every lesson, in order to be able to learn a particular ability. The events during the third year last from 3 to 8 hours. It's best to do 3 events, 3 hours each and get all the stars.

Rolling - the first lessons connected with flying take place during the third chapter of the game. You will learn how to perform a barrel roll on your broom. This way, you will be able to maneuver more swiftly while using this unusual mode of transportation. Unlocking this ability grants you one additional Energy point.

Diving - thanks to this ability, you will be able to perform quick dives using your broom. This way, you can avoid enemy damage. You learn this ability in chapter ten.

Loop-the-Loop - this skill allows you to make a 360 turn while using your broom. The lessons take place in chapter seven, year three.

Felifors - allows you to turn a cat into a pot. After learning this spell, you receive 5 gems.

Duro - you turn an apple into stone. After learning this spell, you receive 5 gems.

Owl to Opera Glasses - transmute an owl into opera glasses.

Mice to Snuffbox - you unlock this ability in chapter 9, year three. For unlocking this spell, you receive 5 gems.

Mandrake - the first Herbalism lesson is in chapter one of the third year. You will learn how to grow mandrakes. After finishing the classes, you receive 5 gems.

Stinksap - you learn this during side missions. After finishing the classes, you get 5 gems. This will help you develop your character.

Dried Nettles - this plant is useful for Elixirs. This ability is developed during side missions. Later, you will use these plants during Elixir classes.

Snargaluff - this plant can serve as a trap for your enemies. You will learn how to grow it during Herbalism lessons.

Finite Incantaten - this skill allows you to deflect enemy spells. It is not possible to use it during duels. After learning this spell, you receive 5 gems.

Petrificus Totalus - this spell can petrify your enemies; you can use it in duels. It deals 15 damage.

Depulso - this spell pushes away people and objects. It can be used in combat to deal 17 damage.

Riddikulus - after learning this spell, you receive 5 gems. This spell cannot be used in combat, however, it often comes in handy during missions.

Immobulus - it stops a character. This way an enemy cannot use his/her spells during a duel for a few rounds. However, it does not deal significant damage.

Antidote to Common Poisons - this potion counteracts normal poisons. You won't be able to use it during missions or enemy encounters.

Wideye Potion - this potion can only work as a good wake up call, or the perfect sleeping drug. For learning how to brew this elixir, you receive 5 gems.

Doxycide - you learn how to make this potion in chapter 9, year three.

Forgetfulness Potion - for learning how to make this potion, you receive 5 gems, you learn the way it's made during side missions.