During the game in Harry Potter: Hogwarts Mystery, you will experience seven years in the title school of magic. There you will develop your knowledge by attending numerous classes. During your first year here, you will take part in spells, flying and potions classes. The knowledge you will gain will help you fight against your opponents and further develop your character. 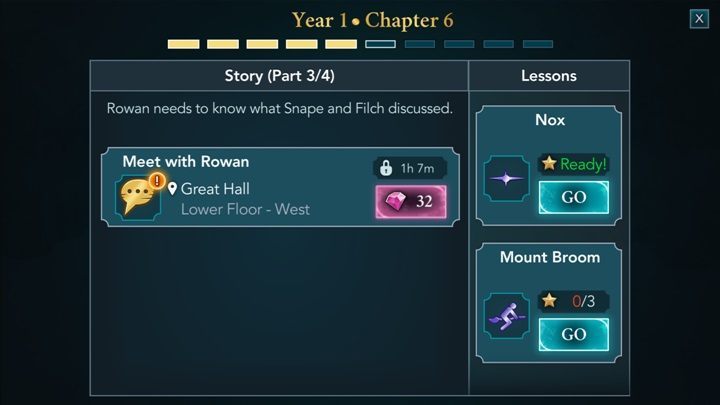 To unlock a new skill, you need to acquire 3 stars during a lesson. Once you have acquired them, you need to go to the event again. The event will last 3 hours. During the event you need to acquire all stars to get the new ability. The most logical solution is to first visit the 2 events that last for an hour. You need to get 2 stars on one of them and 1 star on the other. Thanks tot hat you will save time and valuable energy points.

In Harry Potter: Hogwarts Mystery you can learn to create potions. Your teacher will be professor Snape. During your first year of education, you will learn how to create 4 potions. Some of them will be used only as a way to develop your character, others can be used to heal yourself during duels. 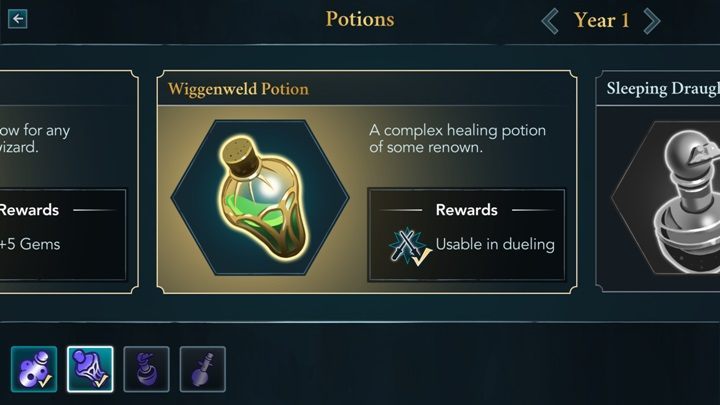 Cure for Boils Potion - this is the potion you will learn how to create during the first class. It is the basic potion that every wizard should know. You cannot use it during duels or to develop your relationships with other students. You can practice preparing it during professor Snape's classes.

Wiggenweal Potion - a potion you will learn how to create in the 4th chapter of the game. Thanks to it you will be able to heal your character during duels. You just need to perform a defensive attack. If it's successful, your character will drink the potion - this will regenerate the health of a character for two turns. This potion can't be prepared or bought - your character has an unlimited supply of it in the inventory.

Herbicide Potion - this potion unlocks during the last chapter of the game. It's used to destroy plants. You will receive 5 diamonds for learning how to create it. This potion can't be used during duels, but it can be used during some of the missions.

In Harry Potter: Hogwarts Mystery you can learn how to fly on a broom. In the beginning, you will learn basic tricks, such as summoning the broom, but as you advance in the story you will be able to traverse distant areas of the school on it. During the first year you will learn 3 tricks related to broom flying. 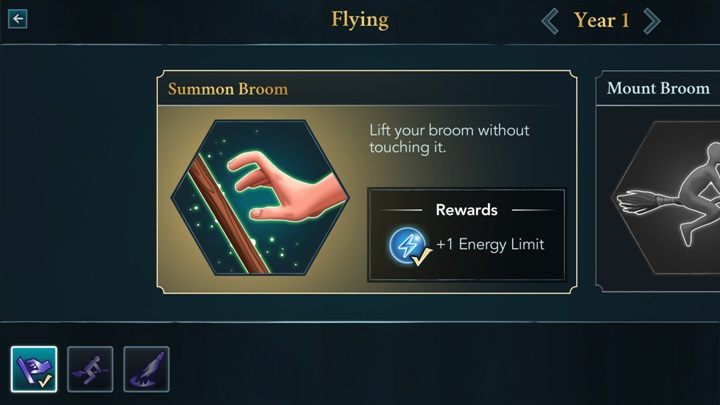 Summon Broom - you will learn how to summon your broom during the first class. Unlocking this ability will reward you with a single point of energy. You can further develop this ability by taking part in flying lessons.

Mount Broom - it's time to get on the broom. During the sixth chapter of the game you will unlock broom flying. Acquiring this ability will also reward you with a bonus energy point. To unlock it you must first earn 3 stars on the flying lessons and then take part in a special event. Once you've done it, the professor will teach you how to fly.

Liftoff and Landing - you will learn this trick during the last chapter of the game. To unlock it you must first get 3 stars during flying lessons. Afterwards, you must go to a special, 3-hour event, during which the professor will teach you the skill. 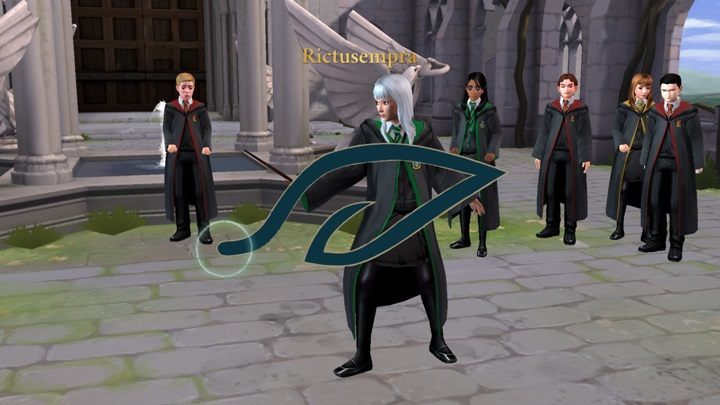 Naturally, in the game you can learn how to cast numerous spells. During the first year you will learn 7 spells. Some of them are there simply to develop your character, others can be used to attack during duels. To cast a spell you need to make a symbol of it on the screen. If you won't do it, the spell won't be cast. If you accidentally click on a different place on the screen than on the symbol, the game will consider it as an error. This is why it's worth to wait and calmly perform the appropriate gesture. 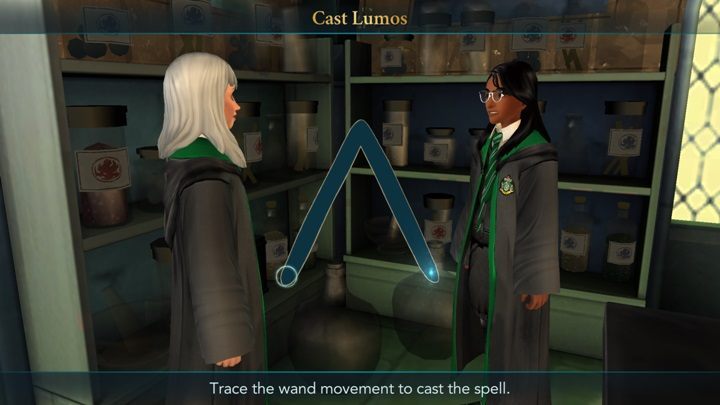 Lumos - the first spell you will perform in the game, allowing you to illuminate the darkness. Thanks to it you will be able to help your companions and make the process of searching easier. This spell will be used during numerous classes. Unlocking it will reward you with 5 diamonds. 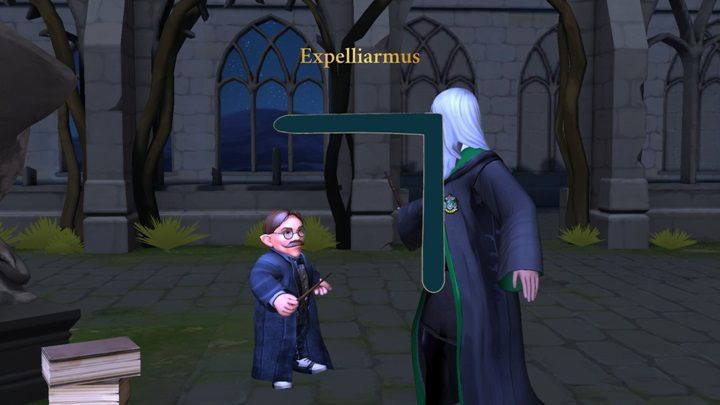 Expelliarmus - this spell will be unlocked during the third chapter of the game. Thanks to it you will be able to knock the wand from the hands of your opponent. This spell can be used during duels to make encounters easier - there's a chance that the enemy will lose a turn once you deprive him/her of his/her wand. 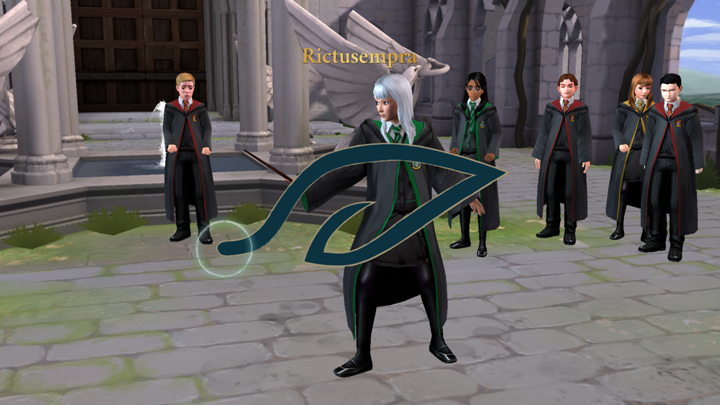 Rictusempra - this spell will be useful during duels. You will learn it together with your companion. The spell allows you to tickle your opponents - a truly cruel crime. 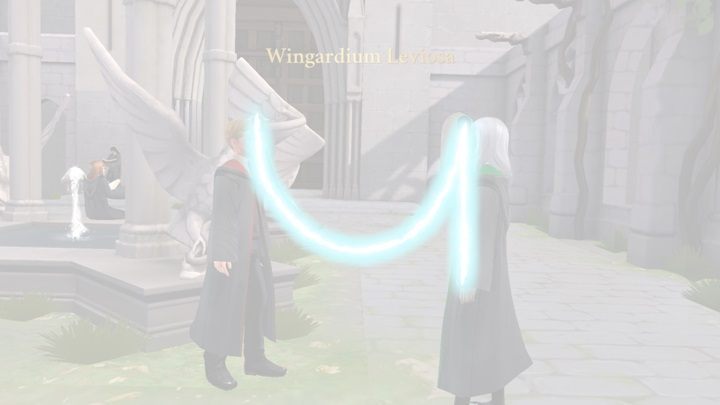 Wingardium Leviosa - during the fifth chapter of the game you will unlock a spell that will help you with numerous missions. The spell allows you to make a selected object fly. Unlocking this spell will reward you with 5 diamonds. 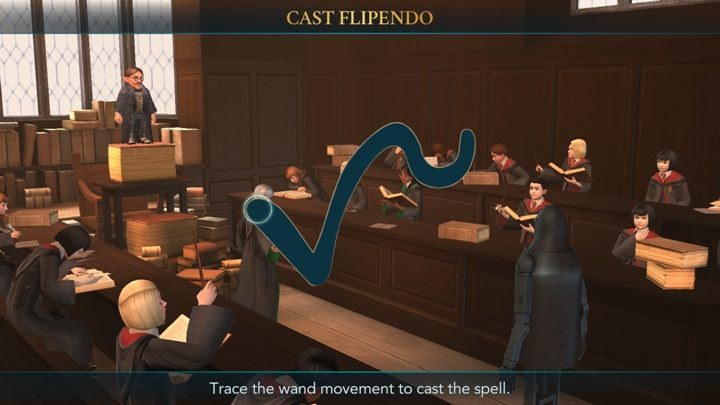 Flipendo - a spell that can be learned during the seventh chapter of the game. It can be used during duels, dealing high damage to your enemy.

Nox - Nox spell will be unlocked during the sixth chapter of the game. The spell allows you to turn off the light. The ability will be practiced during classes. Unlocking it will reward you with 5 diamonds.

Alohomora - a spell that can be learned during the ninth chapter of the game. Thanks to the Alomohora spell you will be able to open previously inaccessible places. Unlocking this spell will give you 5 diamonds.