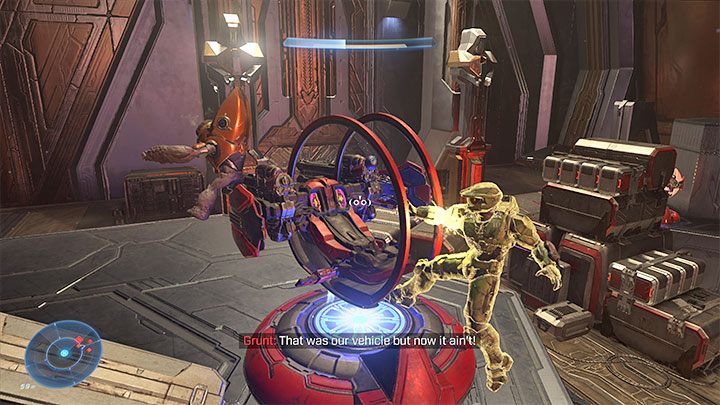 Once the mission begins, you will immediately find yourself in a new location resembling an island. You will encounter your first opponents nearby. During this fight, you can use the nearby platforms and metal walls to hide from their fire.

Watch out for the stationary gun located a little further on. It's a good idea to approach it from behind, using cover along the way. You can destroy the gun or use a grappling hook to take it over. 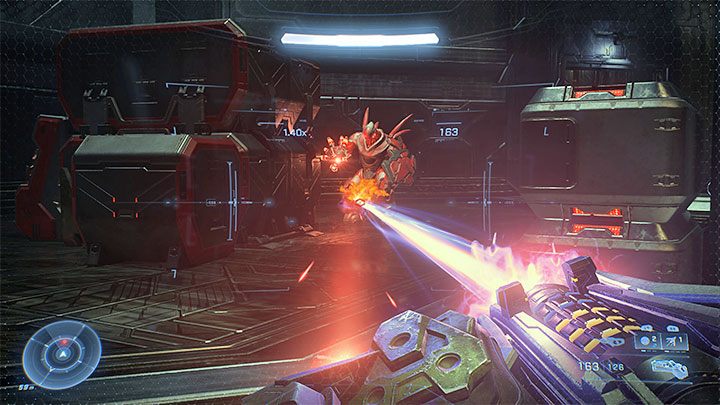 After the battle, reach the console that opens the large gate. Complete the following combat encounters and once you reach the inactive device, look around for an easily accessible power seed. On the way, you can listen to Cortana's recordings or ignore them - this doesn't affect the course of the mission.

In one of the following rooms, a more difficult fight against 2 hunters awaits you. It's mostly made difficult due to the limited combat space. You're unable to freely run around the area or create meaningful distance between you and the hunters. Use the grappling hook more often than before to quickly move away from enemies. Keep an eye on what they're doing so that none of them can suddenly close the distance to your character. Also, make sure to defeat the hunters one by one. In the hall, you will find weapons effective for precise attacks on the weak orange spots on the bodies of the hunters. 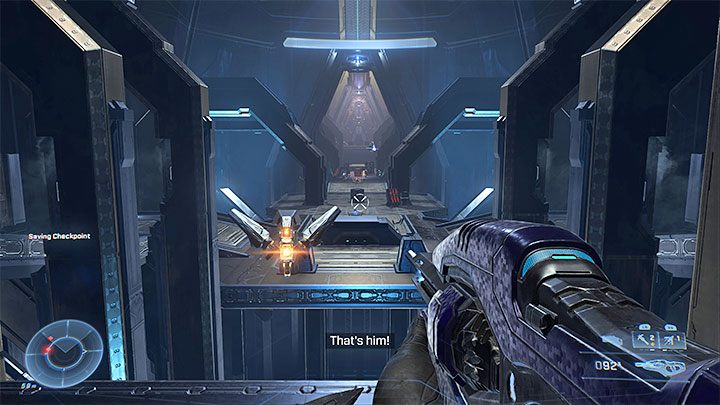 Dispose of the hunters in order to use the terminal and unlock the next door. Expect more battles along the way, during which the sentinels will soon join up with the Banished.

Important note - During this mission, you can obtain the 5th skull - Bandana, which we described in the Secrets and collectibles chapter. To get this collectible, you need to avoid destroying the sentinels that is, the flying machines. Only then will the passage to the room with the skull be unlocked in one of the following rooms. 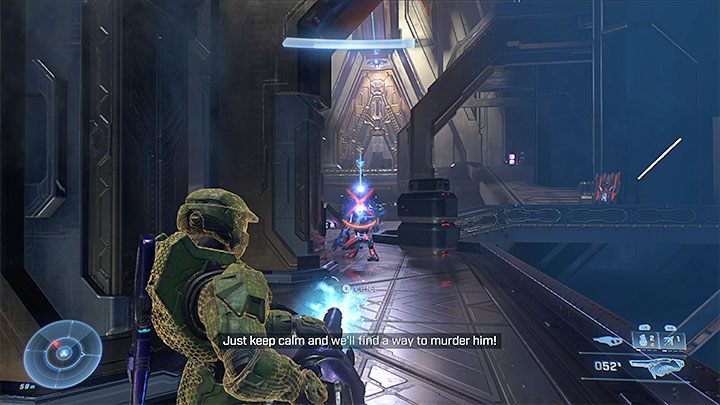 Heading forward, in addition to the aforementioned sentinels, beware of the enemies operating stationary guns. Master Chief can grab some heavy weapons along the way, which are helpful when fighting most of the opponents.

In one of the following rooms, an Adjutant Resolution drone will appear again, but this time you won't need to fight it. You can listen to its apology or immediately go to the marked passage. 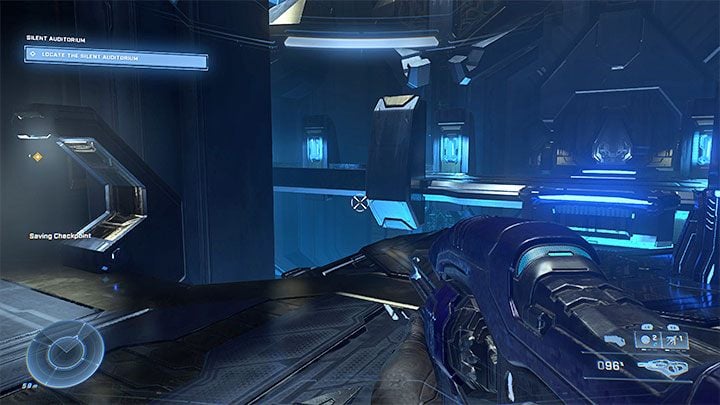 You will reach the place from the screenshot where the bridge expands manually. If you have met the previously mentioned requirements to unlock access to the skull, then you will be able to explore the secret room to the right. Otherwise, you need to immediately head to the main left passageway.

Use the console and watch the new cut-scene. Take back the weapons from the pedestal and head to the location of the final battle. 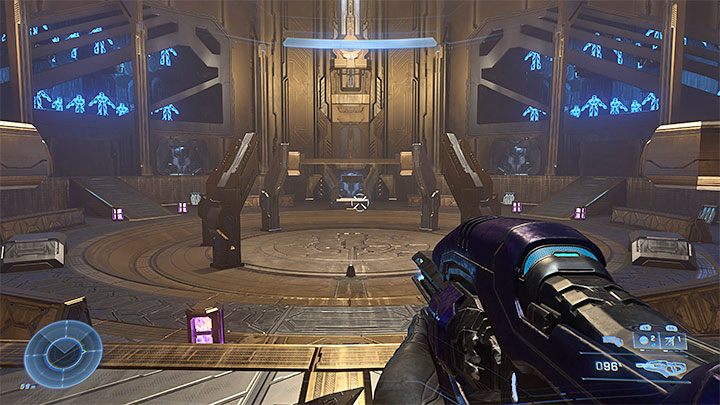 You will eventually enter the large circular room from the screenshot above. Take a good look around to get a better idea of area, as you will soon have to fight a battle here. Pay close attention to the external corridors and balconies, where you can find weapons and ammunition crates, among other things. It's a good idea to stock up on weapons with high firepower.

The Harbinger will appear once you try to use the console to access the system. She is the final boss of the campaign. 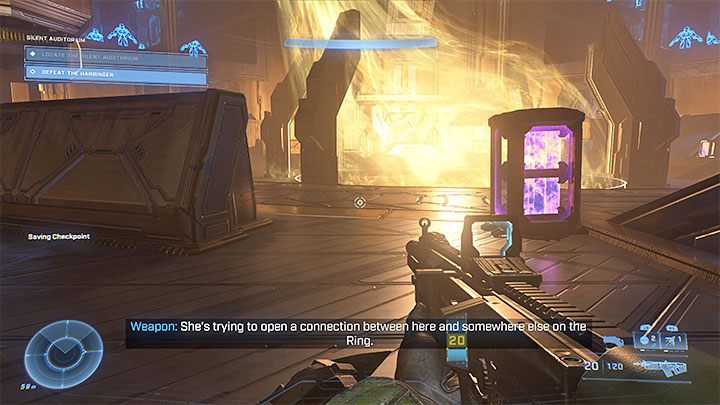 At first, you won't be able to attack Harbinger because she will be inside a kind of a force field. The positive news is that for the moment, the enemy will not be busy attacking you. You don't have to keep avoiding her attacks from the very beginning of the fight. 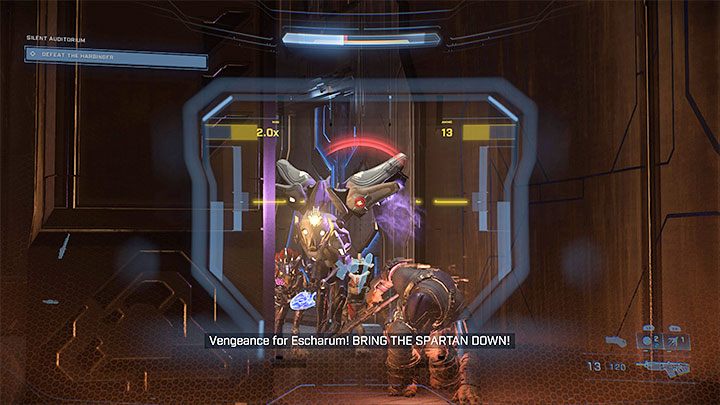 In the hall, several groups of ordinary enemies will appear. You must fight them. They should not be too demanding and you can help yourself by setting up a drop wall (it is particularly useful for avoiding sniper fire) or by hiding behind pillars and other indestructible obstacles.

Our advice is not to rush killing the last enemy of the group. Before you attack him, visit the upper balconies to replenish your supplies. You can find there boxes with different types of ammunition. The point is to have a full or almost full supply of ammunition once the proper confrontation with Harbinger begins. 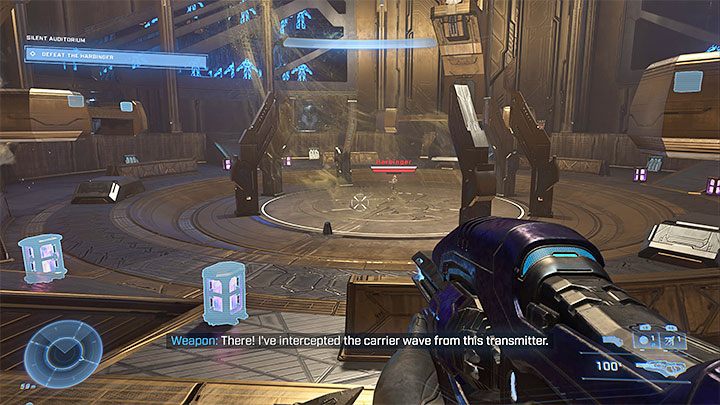 After dealing with inferior enemies, the Weapon will inform you of the possibility to attack Harbinger. 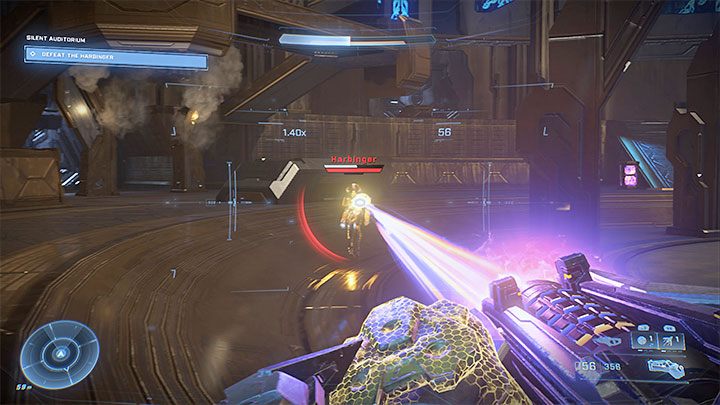 The enemy has a white shield bar and as you know well, you have to drain it completely in order to finally be able to start depriving the boss of the red health bar.

Harbinger, unfortunately, teleports often and it makes her a difficult target for further attacks. Use the tactics of firing short series in order to hit Harbinger every time you shoot, but at the same time it will enable you not to waste too much ammunition after the enemy will move to another spot. 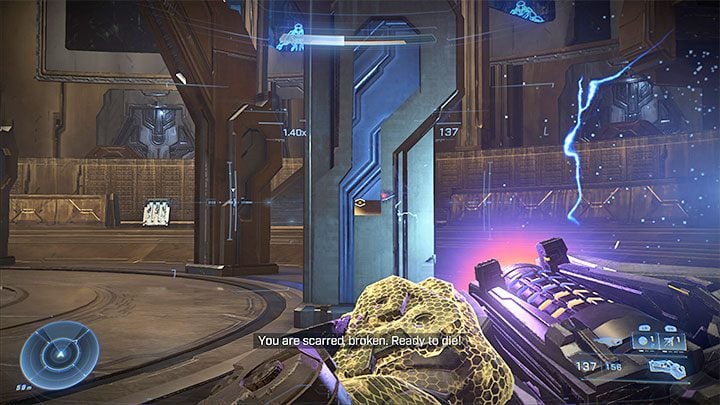 Avoiding the attacks of Harbinger can be, unfortunately, problematic. She is not only able to carry out ranged attacks, but also to leave bombs, the explosions of which can seriously injure or immediately kill Master Chief.

Don't rely on drop walls because they are of no use here - Harbinger can simply teleport and appear behind your back. Help yourself by using grappleshot and keep moving. The ideal tactic is to fire at Harbinger to damage her shield a little and then quickly move to another place so as not to allow her to surprise you. 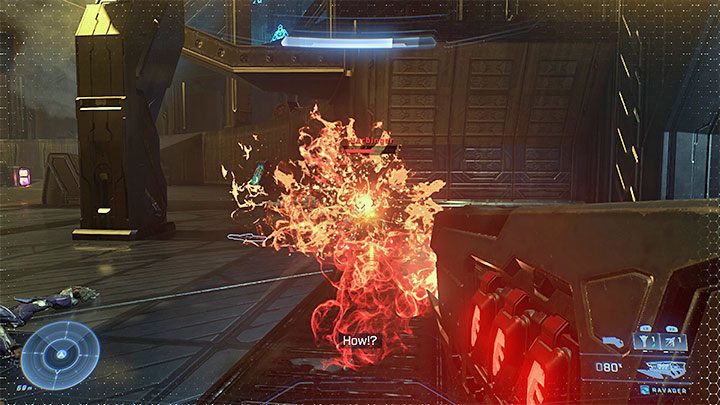 You must attack Harbinger until you drain her entire shield bar (remember to keep attacking the boss because if you stay idle for too long, the white bar will be renewed). Once this happens, use a high-powered weapon to start depriving the boss of her health.

Unfortunately, the game will not allow you to immediately deal with Harbinger because once she receives enough damage, she will return to the central area and will again become "untouchable". 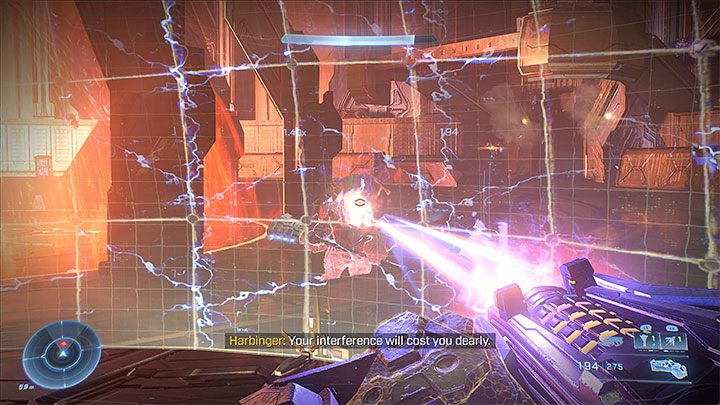 You will need to repeat the pattern described above twice, so you will have to:

Watch out especially for the last group of the Banished because among them, there will be an elite enemy with a huge melee weapon. A great relief is that the game creates a checkpoint after each of the clashes with Harbinger. If you fail, you don't have to replay the whole fight from scratch. 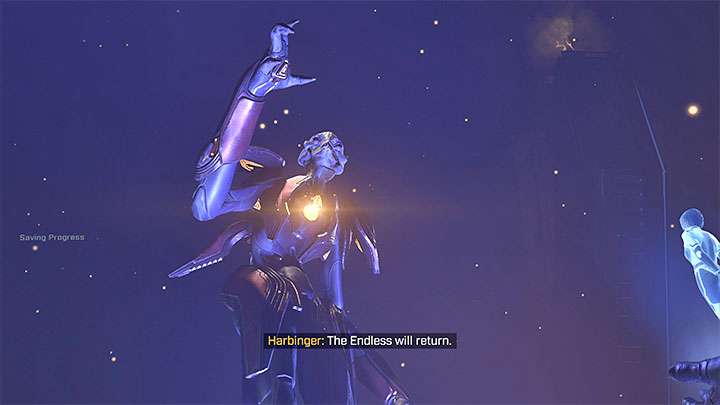 The third clash will be the final one and the game will allow you to ultimately defeat the boss, i.e. drain her last health points. In one fell swoop, you will have also completed the final mission. The game will display several separate cut-scenes.