This page of the Halo Infinite game guide contains the walkthrough of the 7th main mission - Conservatory. The following guide explains, among other things: 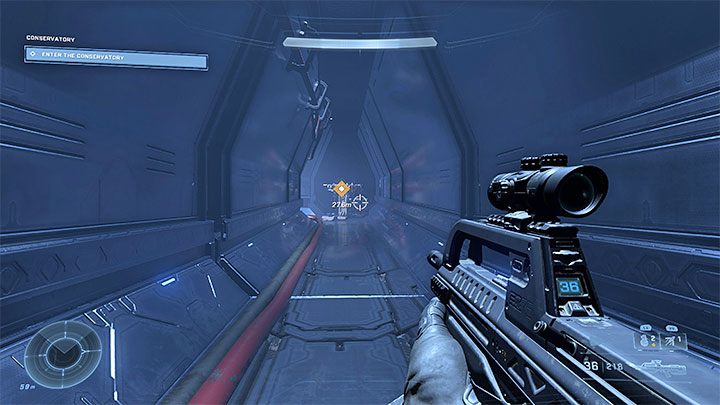 Use the elevator panel. The game will load a new separate location.

Discover what the Banished are searching for 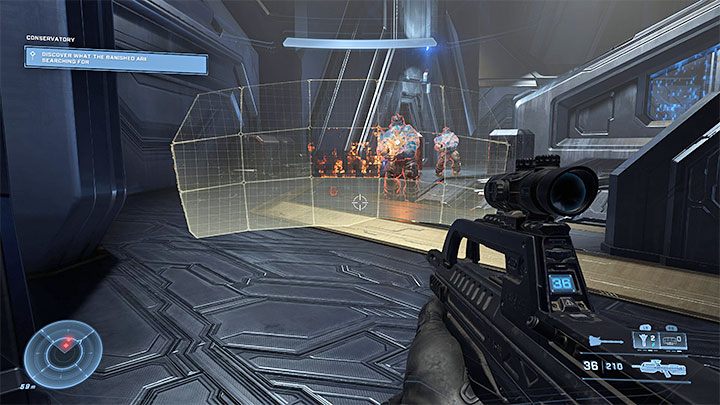 As soon as you enter the Conservatory, you will find another Master Chief armor upgrade on the body of a Spartan - the Drop wall, which can be used as a substitute for the grappling hook and other gadgets. As the name suggests, it can create walls of energy, which are particularly useful during battles where your character has to endure heavy enemy fire. The drop wall blocks enemy attacks until it is completely weakened and destroyed.

The wall is worth using in fights that take place after you've gained the upgrade, as they can be intense and involve attacking numerous groups of enemies. 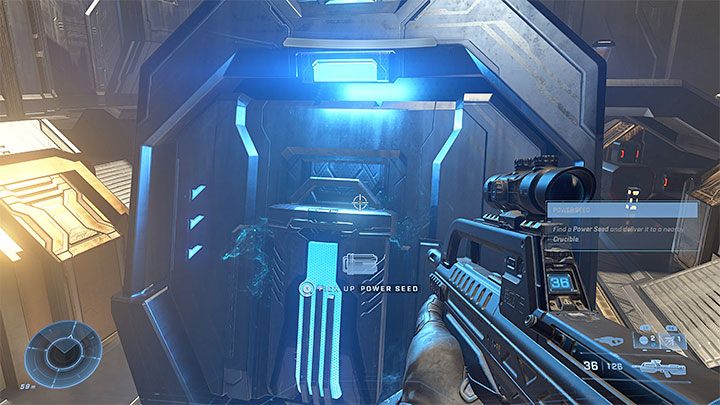 While passing through the Conservatory, you will encounter inactive consoles. They all require Power seeds and, as a reminder, you can use the scanner to find them.

You will also have to face some pretty intense fights. Most importantly, watch out for snipers, enemies using stationary guns and the Banished charging at you. It's safer to attack enemies at a distance and to avoid direct confrontations. You can also continuously activate the drop wall. 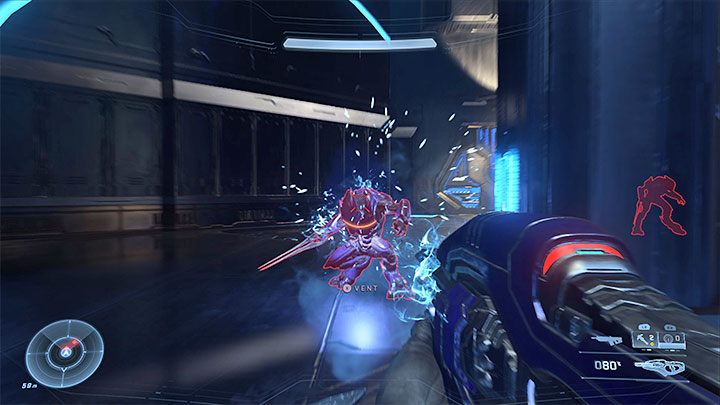 You will encounter the Despondent Pyre drone. Use the new passage and prepare for the upcoming battles. Reach the console that operates the hatch and boldly jump to the lower level.

In this new location, you'll encounter a group of invisible opponents. These enemies can camouflage themselves similarly to the Chak 'Lok boss from one of the previous missions. As in the case of the aforementioned boss fight, the best solution is to use the Threat Sensor. The displayed zone is able to "unmask" opponents and make it easier to fight them. Keep your enemies at a distance, because they use energy blades. 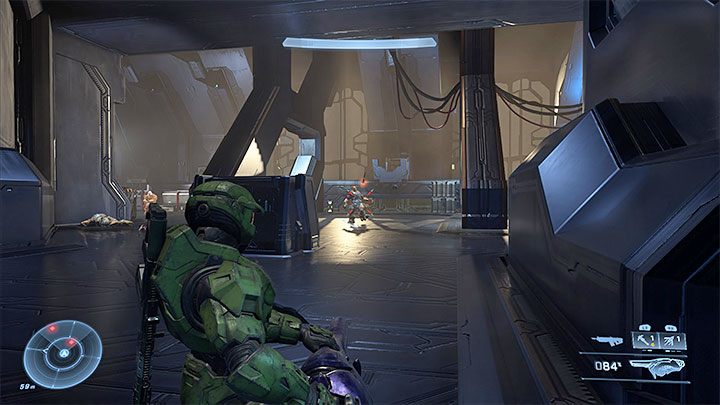 In the next part of this section, you will have to face even more intense battles. There's no need to hurry here. Make a small survey of each area in order to determine the location of enemies and explosive containers that can be hit. During this section, you can also use a stationary gun and even bring it with you.

You'll find plenty of weapons along the way and it's a good idea to arm yourself with gear that's effective at long range. Eventually, you'll reach the larger hall with the central terminal. Examine it to trigger a cut-scene. 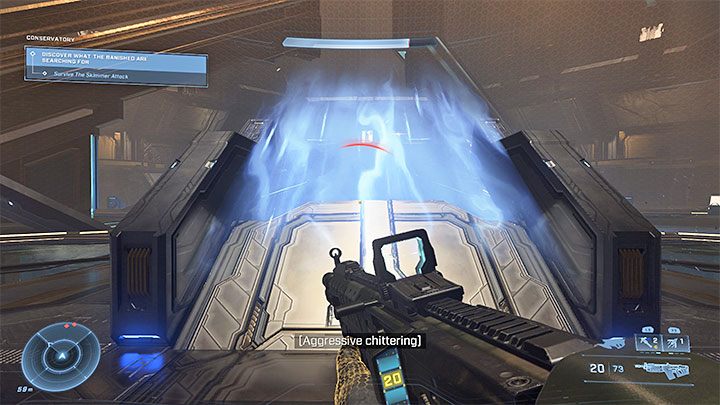 You will need to fight against some flying opponents. During the battle, you should make it a priority to use Master Chief's launch ramps (as pictured in the screenshot). They have 2 main applications - you can attack enemies in mid-air and quickly move to another part of the room and avoid becoming surrounded. 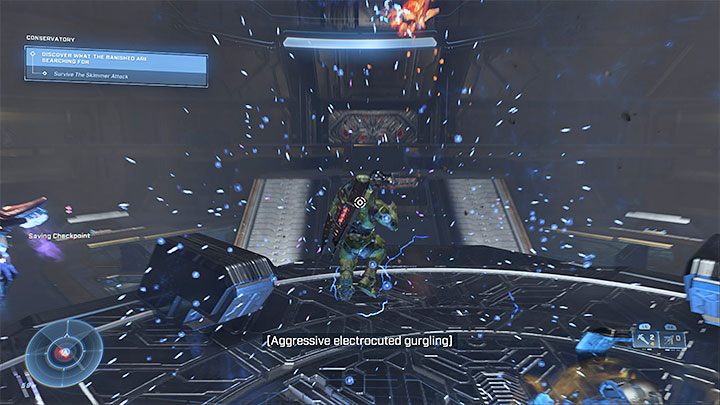 Assault and sniper rifles are perfect for attacking flying enemies since it is important to shoot accurately at medium and long distances.

If you already have Voltaic and/or First Strike upgrades for the Grappleshot, you can use this gadget to pull yourself to flying opponents. This way you can electrocute them and inflict great damage. 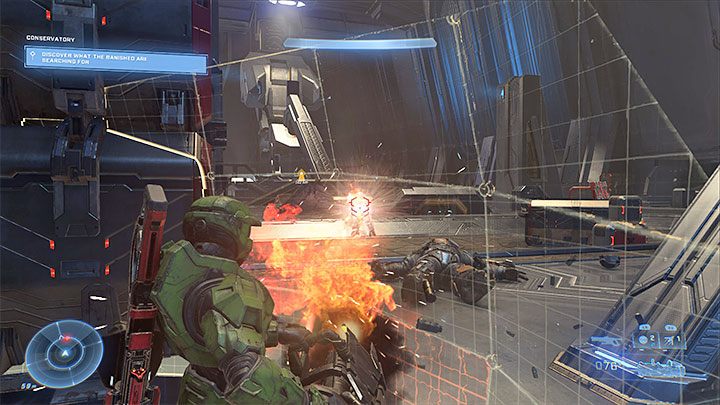 Unfortunately, enemy reinforcements will appear during the battle. Keep a close eye on your surroundings so you don't miss them and focus on taking down the larger and more elite Banished.

The battle is quite long. If you are surrounded by too many enemies, use Drop Wall. However, flying enemies will still be able to attack you. Make sure to regularly revisit the weapons stations and ammunition resupply areas.

Discover what the Banished are searching for - continued 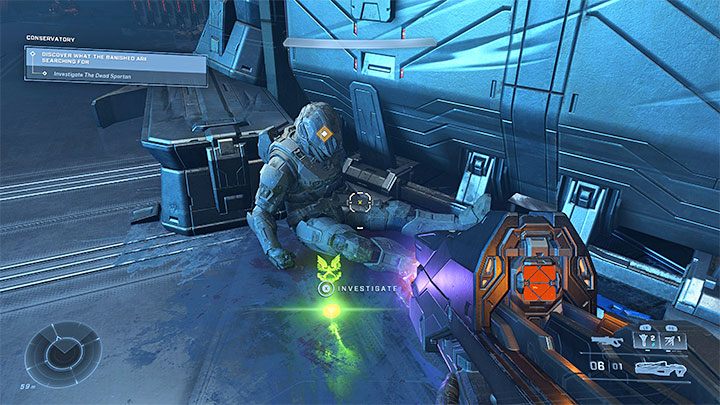 After the fighting is over, return to the central terminal. You may then continue through the Conservatory. Along the way, you will come across a new gadget on the corpse of a dead Spartan - this time, it's the Jetpack, which allows you to perform dodges (it replaces the grappling hook and other gadgets). This can be useful when fighting opponents using powerful weapons, where you need to focus on avoiding their long-range attacks.

In the upcoming areas, you will encounter enemies bombarding the area with red missiles, providing you with a great opportunity to test your new toy (although this is of course optional). 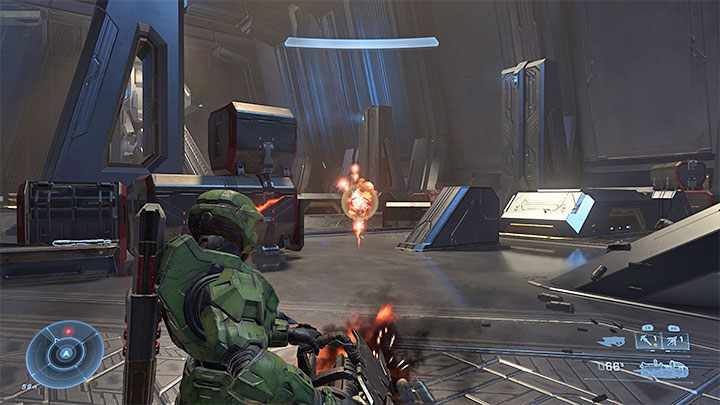 Some of the enemies you encounter will use Scrap Cannons, which belong to the heavy weapons category category, i.e. those that switch the camera to the TPP. You can test them, but keep in mind that they will limit your character's mobility. You should shoot from behind cover, making sure you can quickly hide behind it.

Get to the elevator panel. Interacting with it will trigger a cut-scene depicting your encounter with the Herald and you will complete the mission.