On this page of the Hades guide you'll find info about the rewards obtained for killing bosses and their main uses. Additionally we provide an answer to a serious problem - that being the rewards being replaced with Darkness (a common resource). We also explain how to unlock trophies for eliminating the bosses. 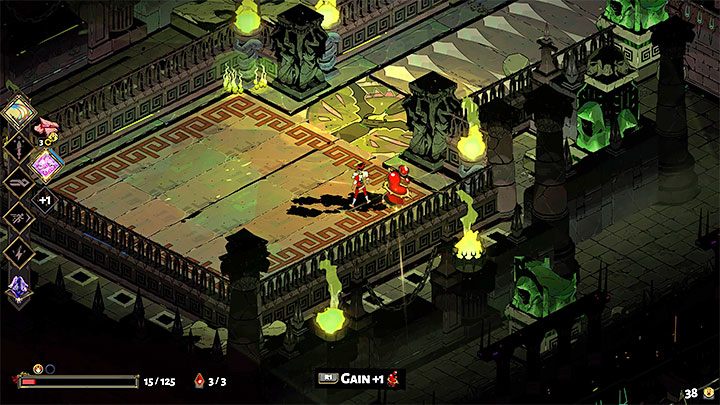 For defeating the boss of Tartarus you're rewarded with Titan's Blood. You get it regardless of which Fury sister you've defeated. Just like with the other bosses, the rewards are limited and soon you may end up obtaining Darkness instead, following the conditions we've described lower on this page.

Additional note - during later runs you might encounter all three sisters at the same time. You won't be awarded with more Titan's Blood - the reward remains identical. 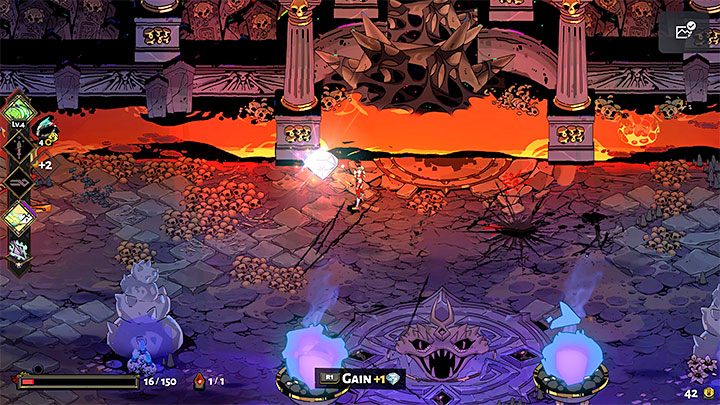 For defeating the boss of Asphodel you're rewarded with a Diamond. 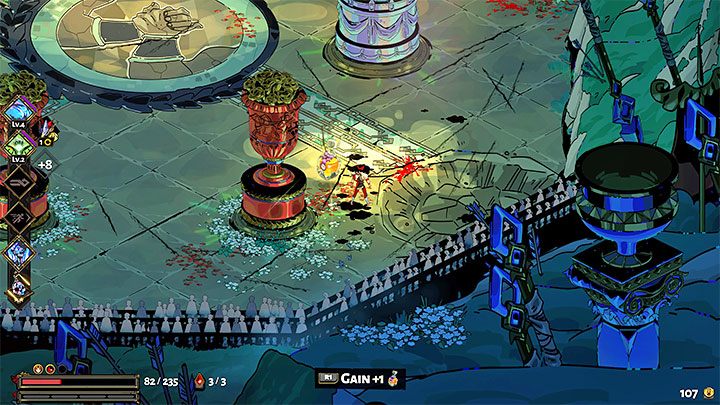 For defeating the bosses of Elysium you're rewarded with Ambrosia. You always get only one bottle, despite having to deal with two enemies at once.

Additional note - Asterius the Minotaur can be encountered earlier in Elysium as a mini-boss. Dealing with him won't award you with additional Ambrosia. 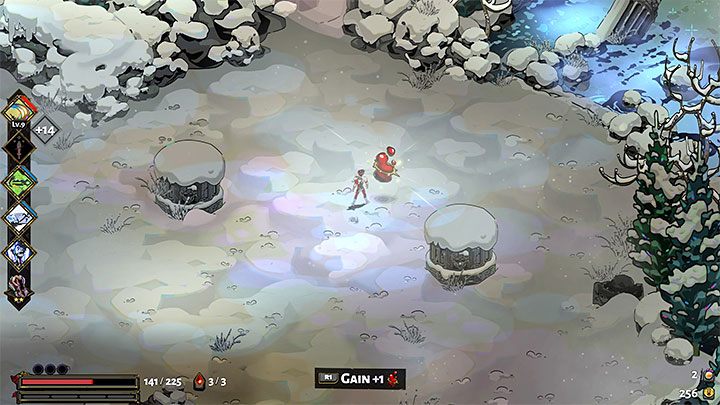 For defeating the final boss in the Temple of Styx you're once again rewarded with Titan's Blood. 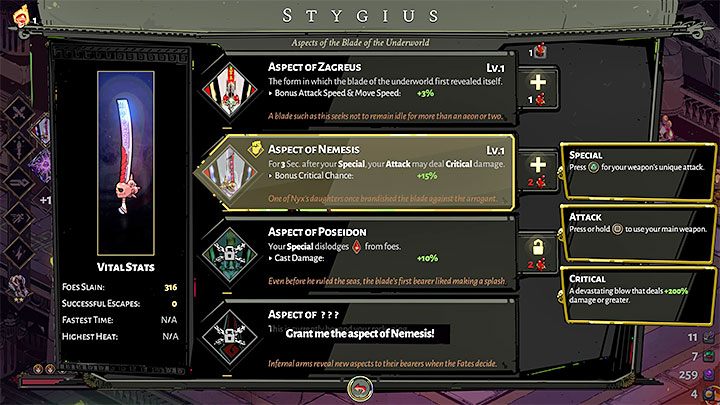 The most important use for Titan's Blood is spending it on unlocking and upgrading weapon aspects - different kinds of stat bonuses which can, guarantee e.g. more damage, faster attacks or higher crit chance. Each of the 6 main weapons has 4 aspects, and maxing out each one requires a specific amount of Titan's Blood.

Advice - we recommend you choose a single aspect for each weapon, one that provides the bonus you think would be the most useful. Instead of spending blood to unlock other aspects, focus on upgrading the one you chose. The fact only one aspect can be active at any given time supports this course of action. 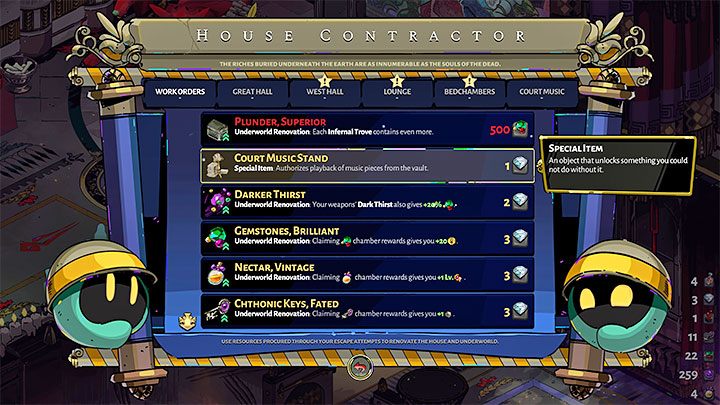 The most important use for Diamonds is buying projects from the House Contractor. This applies to projects unlocked in the later stages of the game, those that cannot be bought using more common Gemstones.

Warning - we advise you to prioritise the projects from the first tab, as they're the only ones that affect gameplay. All the other tabs feature only cosmetic items. 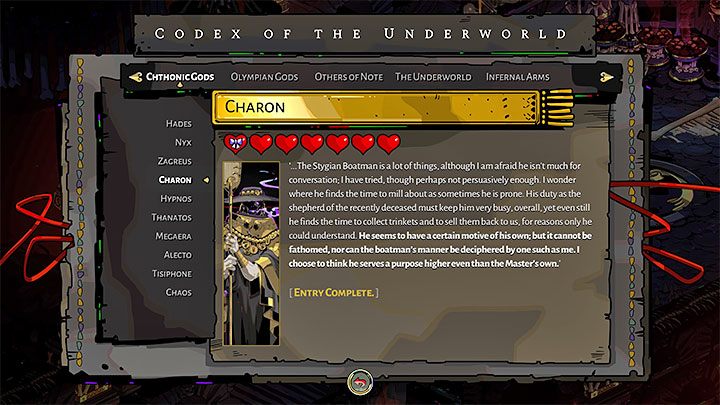 The most important use for Ambrosia is giving it as a final gift to NPCs whose relationship is almost maxed out thanks to gifting them Nectar bottles. Ambrosia is the final item needed to form a close bond with a character.

I obtained Darkness instead of a reward - why? 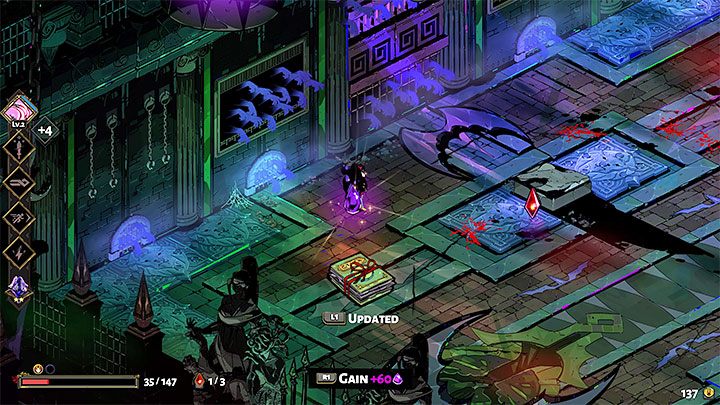 Soon you'll notice that during subsequent runs you'll be rewarded with Darkness instead of rare items for defeating bosses. While you do receive a large amount of darkness (it can reach triple digits), it's still not as useful or valuable as the usual rewards.

This happens because the game stops giving you unique rewards if you defeat the same boss under the same conditions as before, these conditions being: 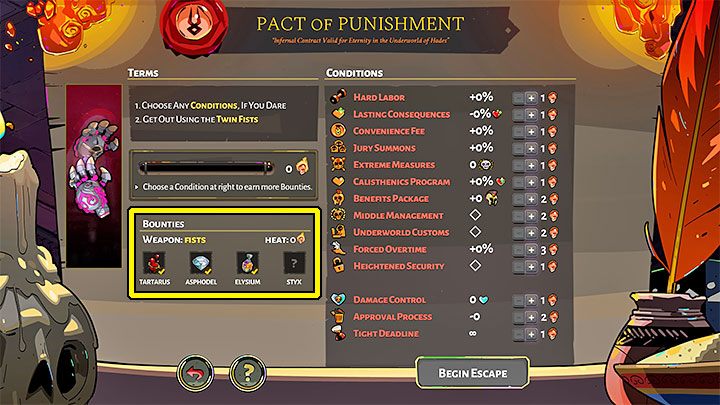 There are two solutions to this problem:

The Wretched Broker - an alternate source of rare items 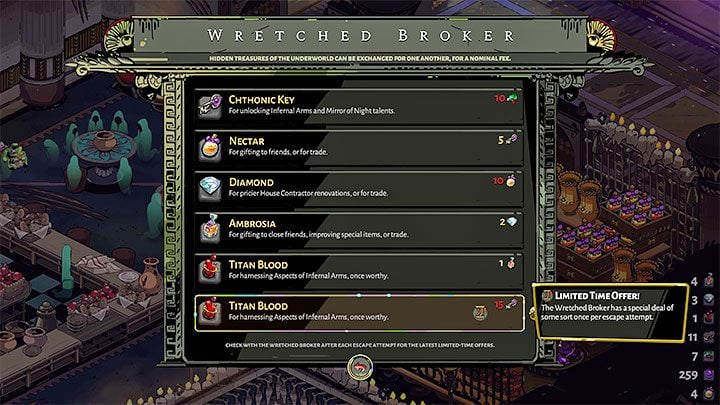 Defeating bosses isn't the only activity you can perform to obtain rare rewards. There are other ways of obtaining them, the most important of which being trading with the Wretched Broker, who appears in the House of Hades after a few runs. The Broker will trade and exchange different kinds of currencies and resources, allowing you to buy items you need.

Warning - Not all trades the Broker offers are profitable to you. Some of them involve trading away a valuable item in exchange for a bundle of more common items - this is not a good idea, as common items can be easily obtained during regular gameplay. Think through every decision you make. If none of the offers interest you, you can return later to see the new deals the Broker offers. Limited time offers can be a good investment - you can seal the deal only once, as the offer disappears from the list after making the trade.