On this page of the Hades game guide you will find a walkthrough of the Lernaean Bone Hydra boss fight in the Asphodel biome. You will learn when you encounter the Hydra, what are the main features of the battle, how to damage the Hydra and its minions, how to avoid its main attacks and how to react to the Hydra's unique abilities.

The boss in the Asphodel biome - general information 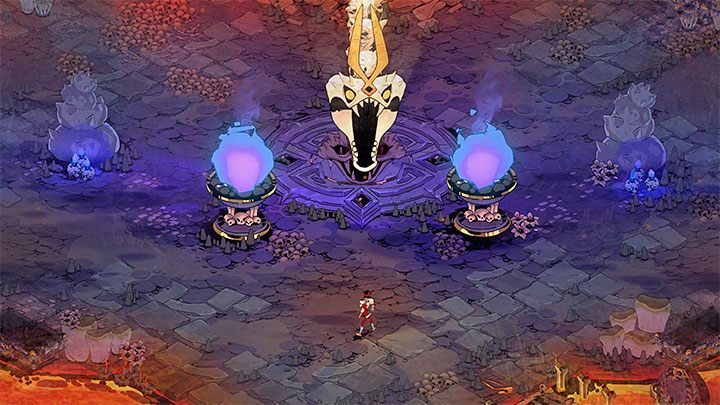 The battle against the Asphodel biome boss occurs once you pass through a total of 23 randomly generated chambers in the Tartarus and Asphodel biomes. Once you enter chamber number 24, the fight will start (this number appears in the upper right corner of the screen when you open the boons menu, for example). In most trials, before entering the battle arena, you will probably visit Charon's shop and it's a good idea to heal your character and purchase items that will increase your chances of winning. We've described the Asphodel biome in more detail in a separate chapter of the guide.

Subsequent fights against the Bone Hydra may differ to some extent. Differences can include the range of attacks used by the main hydra head and by the smaller heads, as well as the different varieties of enemies appearing in the arena. Still, the basic principles of the battle never change.

Important note - our boss fight guide mainly focuses on listing the Hydra's attacks and providing general tactics to use during the fight. It's impossible to post a step-by-step description of how to defeat the boss in Asphodel, because the game is highly randomised and each encounter is at least somewhat unique. This is affected by factors such as weapon choice, the boons and upgrades that you found or purchased, the weapon aspects and abilities you unlocked, and the length of your health bar and regeneration ability. 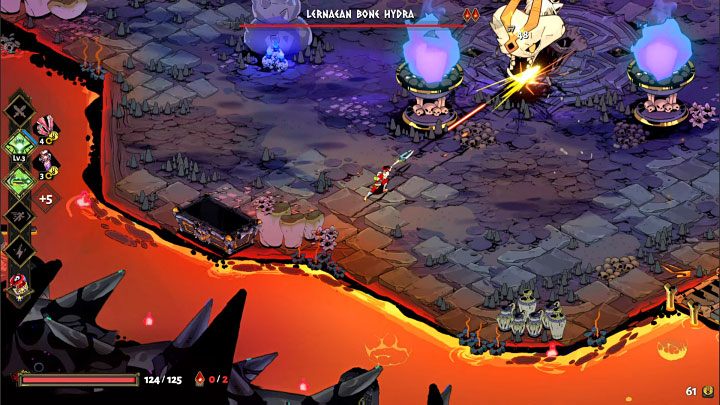 For most of this fight, you will be busy attacking the largest Hydra head. The good news is that the great water snake has limited room for maneuver and stays at the top of the arena. This may make it easier for you to attack the Hydra if you have a ranged weapon or a melee weapon that lets you attack from a greater distance (e.g. the Eternal Spear). 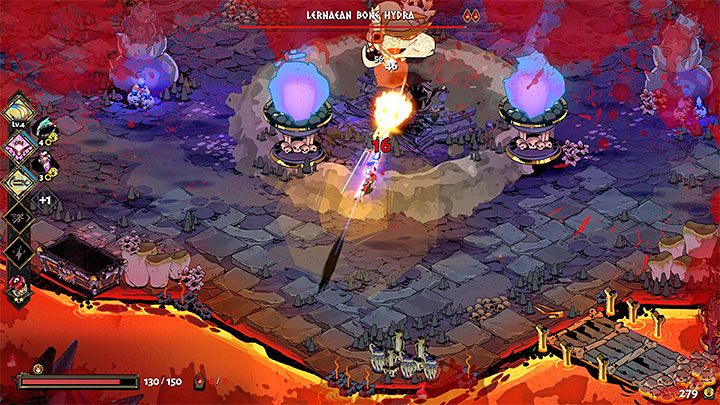 Of course, be ready for the Hydra to respond to your attacks. Whenever you get close enough to the Hydra, you should expect it to powerfully slam the ground. You need to dodge its attempt to crush you with a timely dash.

During the final stage of the fight, the boss might start using a number of ground slams in a row. Don't be in too much of a hurry to approach the hydra again to avoid being caught off guard. 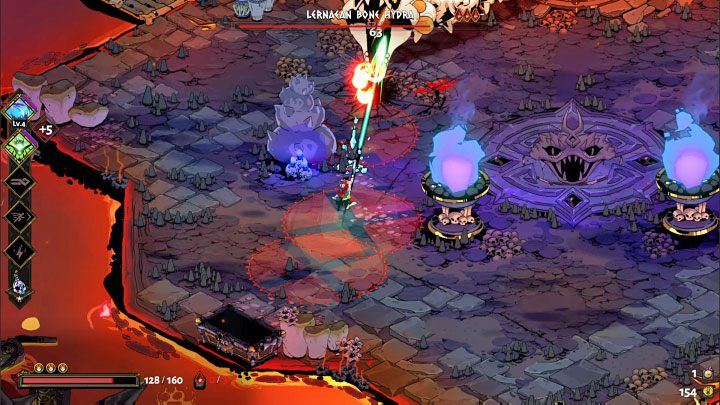 The large Hydra head also regularly uses long-range attacks. These mainly consist of various types of projectiles that can move in a straight line or be self-guided. If you have the option, you can block, reflect or hit them in flight. It's also possible to hide behind small obstacles or just run.

You won't be able to destroy or reflect the projectiles if the boss intends to generate a puddle of magma in the arena or send out a shock wave. In such situations, it's best to dash away in a well-timed manner. 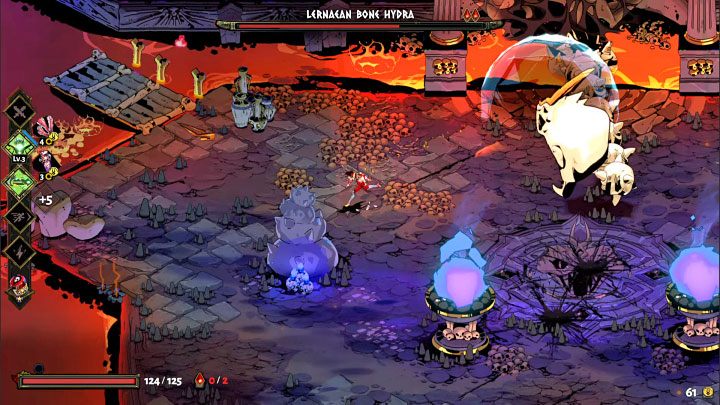 After the main Hydra head loses 1/3 its the health points, it will become temporarily invincible and some smaller heads will be summoned. This happens twice during the fight, and the second time more small heads will appear (six instead of three). 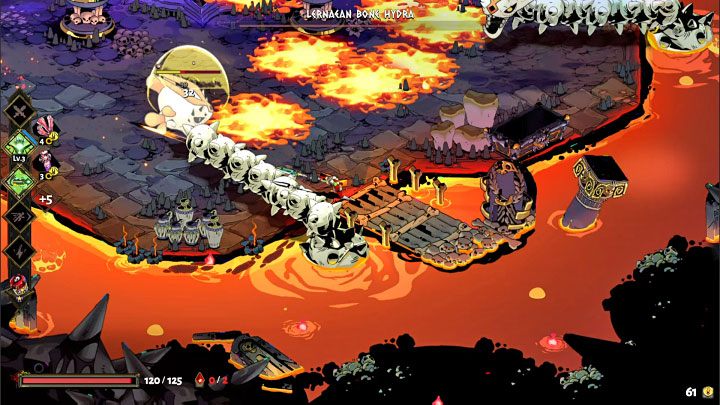 You need to stop attacking the biggest head for a while and focus on eliminating the smaller heads. You can attack them in any order, but it's a good idea to destroy them one by one.

The smaller heads have similar attacks to the main one. For example, they can slam the ground, shoot projectiles or create small magma puddles in the arena. You need to correctly respond to these types of attacks and you shouldn't try to destroy the small heads at all costs, because you might end up taking a lot of damage. 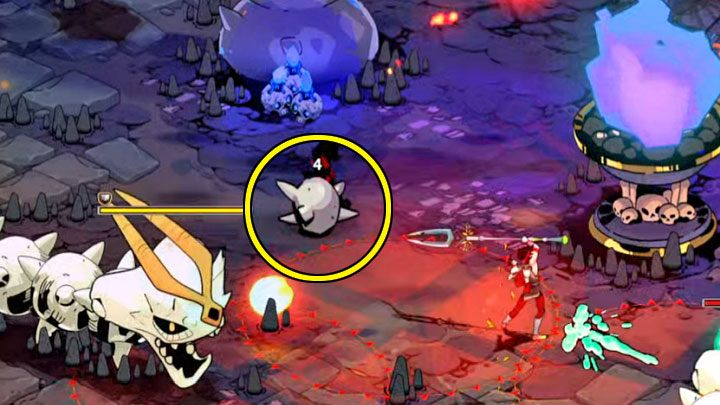 The main head doesn't remain idle as you attack the small heads and you should anticipate iits attacks, too. These can be ranged attacks, but the most dangerous type of attacks is spitting out cocoons that will "hatch" into strong opponents (the attached image shows an example of this object). Each cocoon opens after 5 seconds, and as a result, you should always try to destroy them before the "birth" occurs. 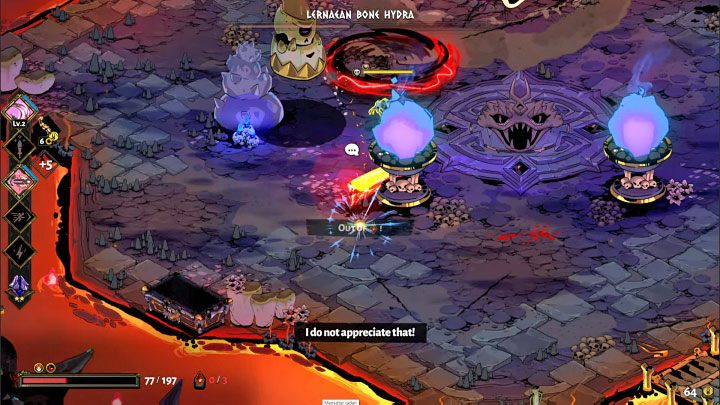 Additionally, expect other random minor opponents to appear in the battle arena. You don't have to worry too much about most of them. The exception is the flying opponent known as the Skull-Crusher, which can be recognized by the circular shadow on the ground. You must move away as soon as the shadow begins to change in size, because it's a sign that the Skull-Crusher is about to powerfully hit the ground.