On this page of the Hades guide you will find key facts about Styx Temple realm (the Temple of Styx). Here you'll find tips and hints on what types of chambers appear in the Temple of Styx as well as learn the unique dangers and potential attractions that await Zagreus in this realm and the requirements for unlocking the passage to the lair of the final boss of the campaign.

General information about the Temple of Styx 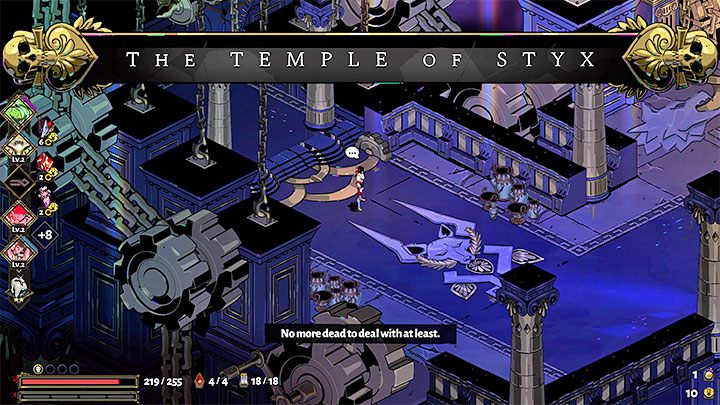 The Temple of Styx is the final fourth main realm of Hades. This realm is reached from the side of Elysium, specifically after defeating Asterius and Theseus in the last chamber of this biome.

The game does not allow you to shorten the passage to the Temple of Styx in order to be able to advance faster to the final stage of the campaign. You must first go through the realms of Tartarus, Asphodel and Elysium and defeat their main bosses in each subsequent attempt. Only then will you gain access to Styx. Fortunately, the chances are that in subsequent games, you will discover or gain something new. As a result, you should not be bothered by the high repeatability of the game.

Unique attractions and dangers of the Temple of Styx 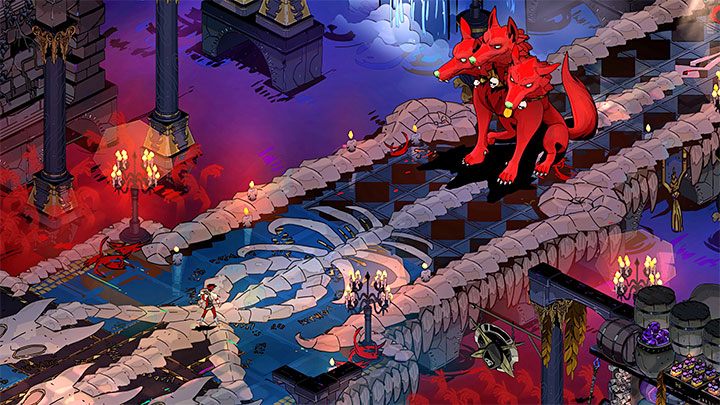 The Temple of Styx has a completely different structure of progress when compared to the three previous realms. In the central part of this biome, you will encounter Cerberus that will initially block the road leading to the surface exit. 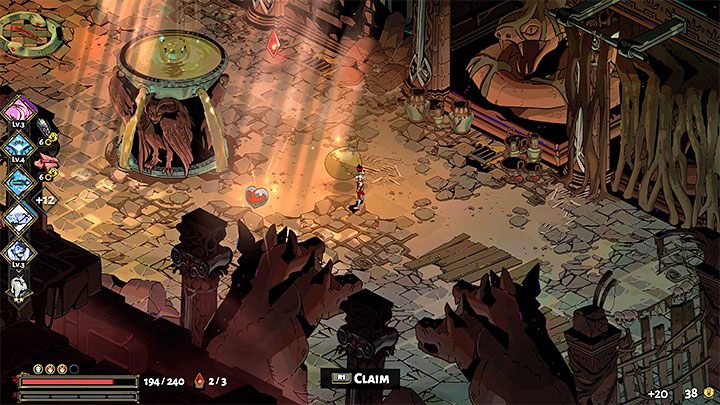 Cerberus demands a "bribe" in the form of Satyr Sack which you will be able to find in one of the chambers of the temple. After locating the sack and returning to the central location, you can interact to deliver the loot to Cerberus. You will then move on without having to face Cerberus. 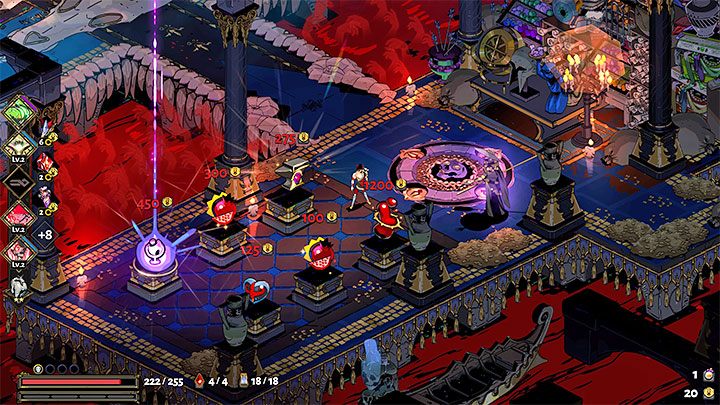 In the central area of the Temple of Styx you'll also find:

1) Charon's big shop - it offers mainly more expensive and rarer items. You can buy some unique items there like Anvil of Fate, which removes 1 weapon upgrade from Zagreus ' equipment and replaces it with 2 new upgrades, and Blood of Titan, which previously could be obtained only as a trophy for defeating a boss or by trading in the store in the House of Hades. 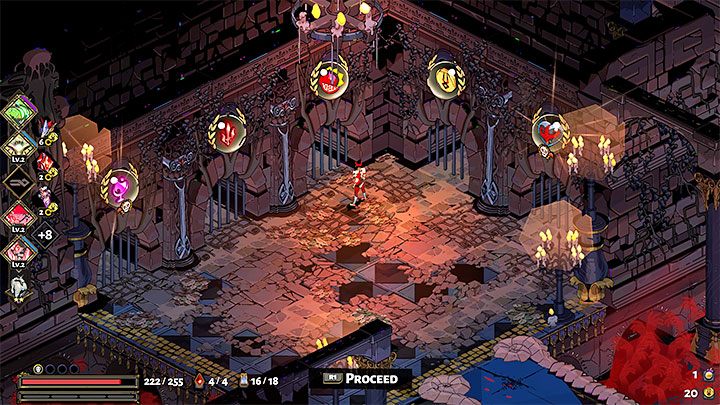 2) Passages to 5 random locations - there is no requirement to explore all of them, although you will probably have to visit 3 or 4 locations to find Satyr Sack and thus, be able to advance to the campaign finale.

After selecting one of the passages, there's not a single room to explore but a group of them (e.g. 4-5 rooms). The boon can be found in the very last room of the group, which is shown on the symbol from the passage. The room with the main boon also features a teleport allowing you to quickly return to the central part of the temple. 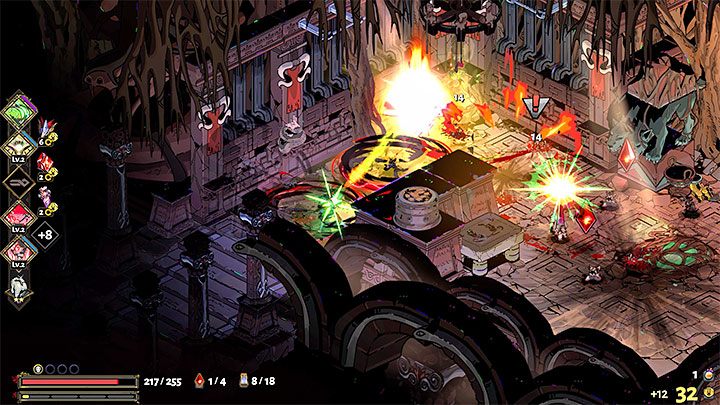 Most fights in the Temple of Styx unfortunately take place in small rooms. This is not necessarily bad news if you're playing a short-ranged character, but it can cause you problems if you're primarily using long-ranged weapons and attacks. You have to look for ways to move away from enemies as well as try to stop them and jump away if you get flanked. 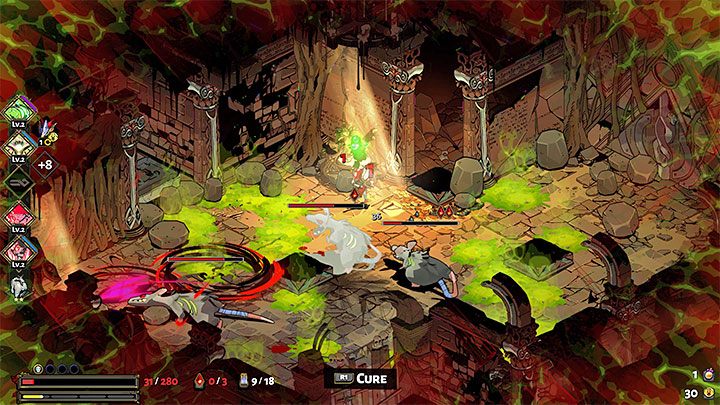 The other chambers most often feature different varieties of vermin. A unique feature of rats as well as of cultists found in some locations (Satyr Cultist) is that your character may get poisoned by them. This will happen, for example, if you enter a green puddle left by rats, come into contact with floating poisonous fumes or get hit by an arrow poisoned by a cultist.

Poisoned Zagreus slowly loses health points. You must then get to one of the healing tanks and you can still do it during combat. You don't have to wait until the end of the fight. 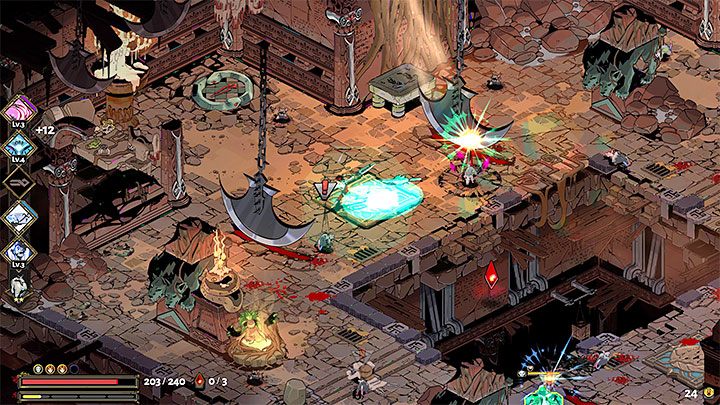 There are also numerous traps in the Temple of Styx. The most serious of these are guillotines, which are activated by standing on pressure plates. You can easily miss them in the heat of battle due to the limited combat area. If you notice them, they can help you get rid of enemies following you.

Another type of traps in the described location are traps firing spinning blades. Since you can't stop them, you have to rely on dodges. Traps are deactivated only after the location has been secured.

In the Temple of Styx there are also Bother enemies who bomb the area. As with similar monsters from previous realms, you should quickly eliminate them.

The final boss of the Temple 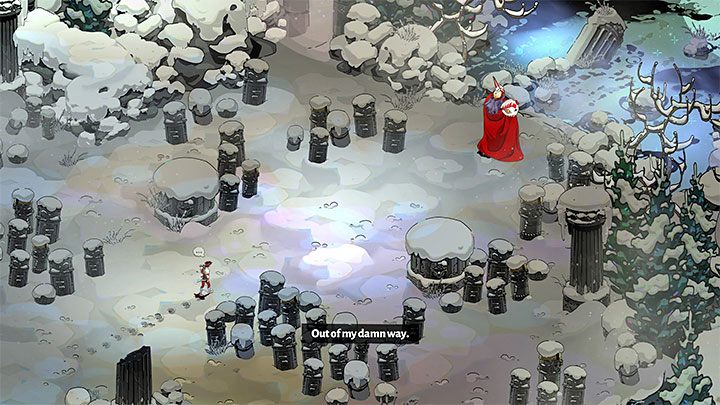 The final boss of the entire campaign is the titular Hades. The confrontation with him occurs after you deliver Satyr Sack for Cerberus and he unlocks the passage. Before you go to the exit, do not forget to visit Charon's shop one last time and spend all your obols.

While fighting Hides, you have to drain his health bar twice. After exhausting the bar for the first time, a short dialogue will occur and you will advance to the second stage of the duel. In each stage of the fight, Hades has slightly different attacks and skills. Descriptions of the Temple of Styx boss battles can be found in the separate Bosses chapter of our guide.

Defeated Hades leaves behind Titan's Blood, although it can also be a large "pack" of Darkness. Dealing with the final boss will allow you to complete the game, although this does not mean the end of the struggle within the ongoing campaign. You will be able to proceed with further attempts and discover other unique content as well as further develop the hero and his weapons.