On this page of the Hades game guide you will find a list of all available weapons, which includes both melee and ranged weapons. We have also put together a set of tips and important information about weapons - you will learn how to unlock, test, select and upgrade them.

All weapons in Hades

There are 6 main weapons you can use in Hades, but not all of them are immediately available (more on this in the next subsection). Here is the list:

Detailed descriptions of each weapon can be found on the following pages of this chapter. We have described each of the available weapons in detail in terms of unlocking, unique attacks and recommended combat tactics. 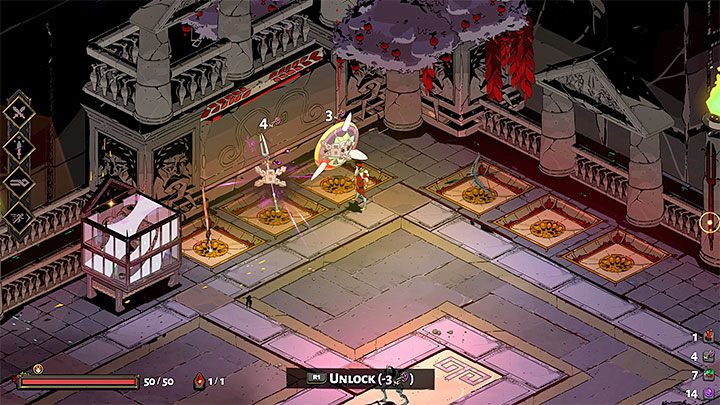 When you start the game, you can only use the Stygian Blade, as it's the only weapon available. This is not a weak weapon and will also be useful to you in runs during the later stages of the campaign, but it requires a certain gameplay style, which may not quite suit you.

More weapons can be bought with Chthonic keys, which can be found, for example, while traversing the underworld. You can buy weapons in the last room of the House of Hades, but you must always wait until a new weapon appears along with information about the number of keys required to unlock it.

You will permanently keep each weapon you purchase with keys, i.e. you will not need to buy it again or pay for "renting" it later on in the campaign. You can use it without restrictions.

You will need to use the weapon selected in the House of Hades throughout your entire next attempt to escape the underworld. The game will not allow you to switch it until you die or surrender and return early to the House of Hades. Unfortunately, there is no option to take several weapons with you on a run and switch between them. 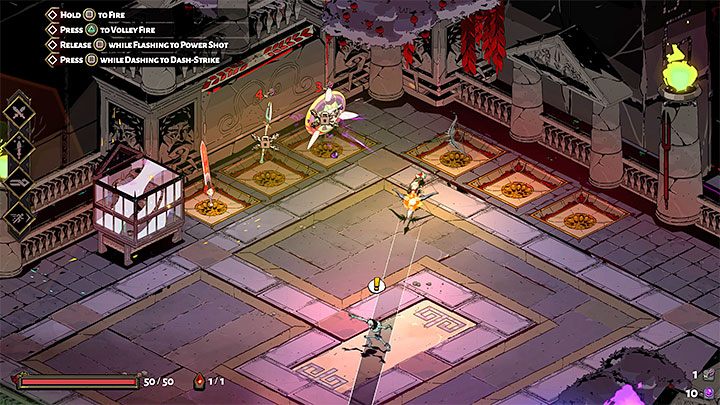 You should immediately test each new weapon in the sparring arena. You can attack Skelly, who is a voluntary "training dummy", without any obstacles.

Pay attention to the list of actions visible in the upper left corner of the screen - they inform you about the normal and special attack and possible combos with dashing. It's a good idea to practice all the moves in order to understand the features of a given weapon and how to use it to effectively damage opponents. 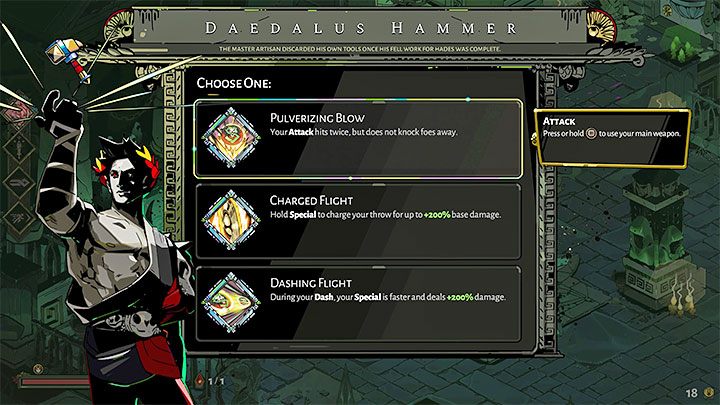 You can upgrade your weapons during the runs. This is mainly done by using the Daedalus Hammer artefact, which can amplify your currently equipped weapon's selected attack types, modify them or give them new properties. It's a good idea to select items from the list that will upgrade the types of attacks you use most often. For example, if you regularly use the weapon's special attack, it would be great to make it even stronger.

Other things can also affect your currently equipped weapon's attack strength, for example, bonuses from the abilities you unlock and boons that can be found in the underground. All this makes your attacks more and more effective and it will be easier for you to eliminate elite enemies and bosses. 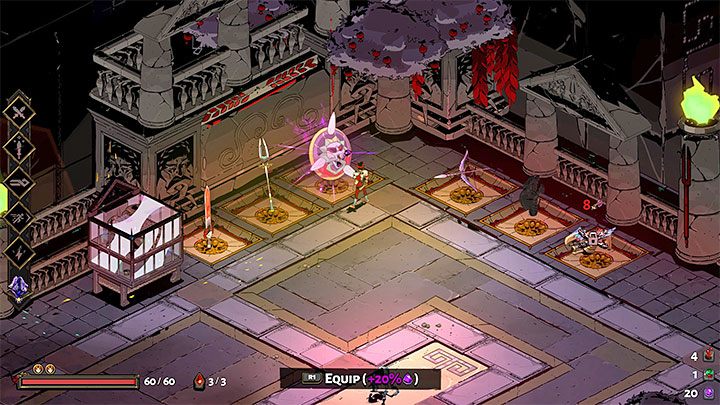 In the later stages of the campaign, a purple glow may appear when selecting weapons - the screenshot shows an example of this situation. Selecting such a weapon for the next run will result in receiving a bonus to the amount of Darkness you collect (in the example, the bonus equals 20%). You do not need to take advantage of this offer, but it can be valuable if you're collecting Darkness to unlock important abilities at the Mirror of Night. 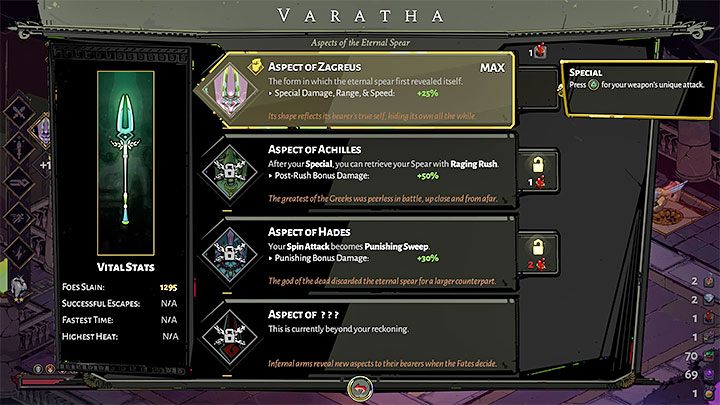 In later stages of the game, the aspects mechanic will be unlocked. It allows you to modify and upgrade weapons without leaving the House of Hades. This means that the weapon upgraded in this way will have additional or increased stats as soon as you leave the House of Hades and start exploring the underworld. Of course, while exploring the lands you will be able to further upgrade it and benefit from added stat bonuses.

Each weapon has various aspects available, which differently affect the way it works. They can, for example, increase a certain damage type, allow you to attack more frequently or improve your chances to evade correctly. Titan Blood is used to buy aspects, which is a rare resource obtained through methods such as defeating selected bosses. Only one aspect can be active at a time and as a result, it's a good idea to start by developing just one of the items on the list in order to reach its maximum level as quickly as possible and thus get the highest possible stat bonus. We recommend choosing one aspect for each of the main weapons.