On this page we have compiled various tips for playing Hades. These include many important elements of the game, including exploration of the underworld, unlocking weapons, and upgrading the hero. With our starting tips, it will be easier to find yourself in the world of the game. 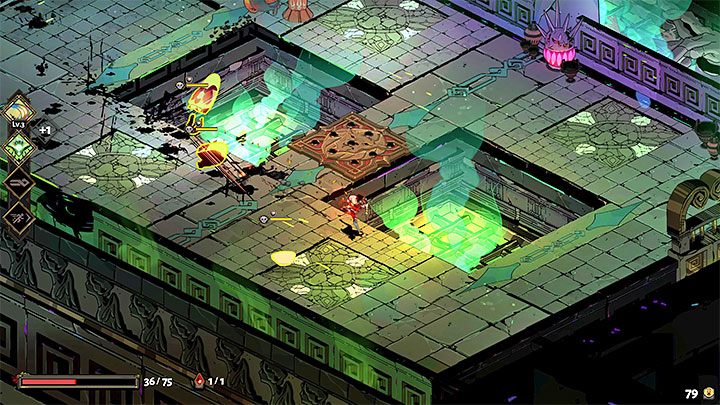 In Hades, mobility is key. You should try to stay in motion regardless of the type of weapon you use and your chosen gameplay style. This can lower the chance of taking damage from traps and enemy attacks (especially from ranged and charge-like attacks).

Dash as often as possible while moving. These function as evasions and while dashing, Zagreus becomes temporarily invincible. Dashing can also be used, for example, to avoid traps and various environmental hazards (such as the magma rivers in the Asphodel Meadows).

On the Death - how to avoid? page, we've included other tips to help you keep the main character alive. 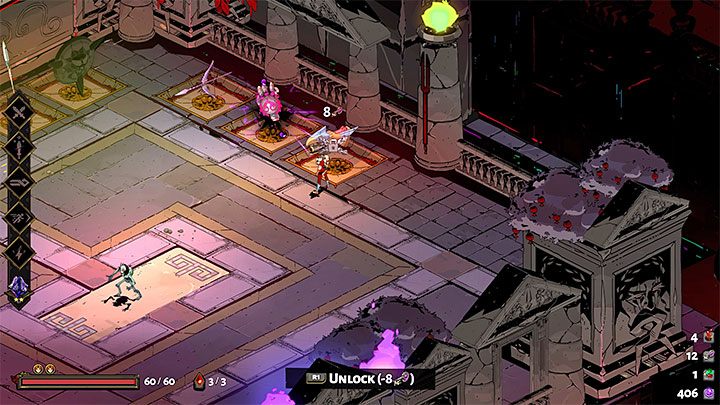 Weapons are stored in the armory in the last chamber of the House of Hades. Initially, only the sword (Styx Blade) is available and you will need to unlock the other weapons with chthonic keys. As a reminder, you can find these keys while exploring the underground - look for passages marked with key symbols above them. It should be noted here that the keys also have another use - unlocking new abilities at the Mirror of Night. However, we advise you to prioritize unlocking weapons, especially since Zagreus will be able to permanently keep the purchased weapons.

You can safely test each newly acquired weapon on Skelly, but it's also a good idea to try it out during a longer trip to the dungeon. This will make it easier for you to choose your favourites - ours is the Eternal Spear, which is effective both in melee and ranged combat.

All available weapons are described in more detail in the Weapons chapter. There you will also find tips on how to correctly wield different types of weapons and information about their advantages and disadvantages.

Give nectar to other characters to receive keepsakes 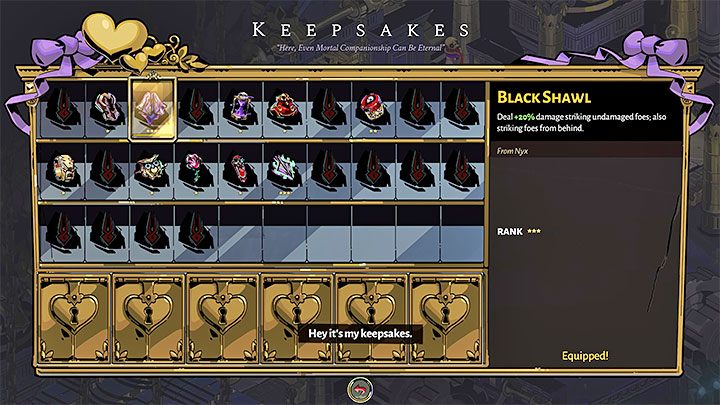 From a certain point in the game, you will begin to find or buy nectar - a potential gift for friendly gods. Every time you choose to gift nectar to a new character, you will unlock a keepsake. These are passive stat bonuses that you can set as active (only one can be active at a time) and you can also upgrade them further to increase their effectiveness. If you come across a particularly valuable stat bonus, it's a good idea to use the keepsake for a long time and reach the required number of fights to upgrade it to the highest rank.

It is worth noting that you can still continue giving nectar to those gods who have already given you keepsakes. This will further strengthen your bonds. For more information, check out the Keepsakes and Nectar - who to gift? pages. 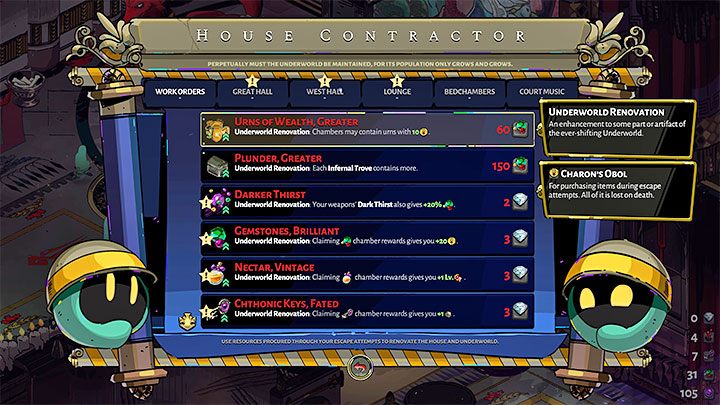 Early in the campaign, the House Contractor will appear in the House of Hades and you will be able to ask him to complete projects for you. The list is modest at first, but will grow as you keep buying projects and advance in the campaign.

The work orders category contains by far the most important projects, because they can make the game easier or diversify its course in various ways, for example, by giving you the chance to find underground chambers with health-restoring fountains or by unlocking the option to fulfill prophecies. In the next tabs of the project window list cosmetic items, but since they do not affect the course of the game we advise you to leave them for later. You can find our recommendations for which projects you should implement on a separate page: The House Contractor's best projects.

Raw materials are used to pay for renovation projects. Initially, you will only require Crystals, which can be found along with other loot in the underground, but in the later stages of the campaign to complete certain projects you may also need Diamonds, which can be obtained, for example, as rewards for defeating certain bosses in the game world.

Talk to all of the NPCs 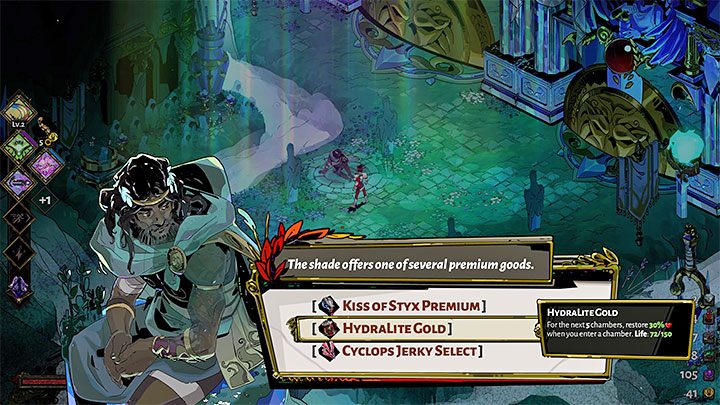 As you progress through the game, you may encounter various gods and other friendly characters. You should talk to every NPC with an exclamation mark over their head you encounter. You will find most of the characters you can talk to at the House of Hades (their availability may change on each visit), although you can also initiate conversations with them while exploring dungeons. Conversations are mainly rewarded with new codex entries, but they also give you the chance to hear more about the game world and learn new facts related to the main story.

You can expect to receive some kind of reward at the end of some encounters. Specifically, this applies to NPCs that can be encountered randomly in the underground:

Pay attention to the signs on the passages 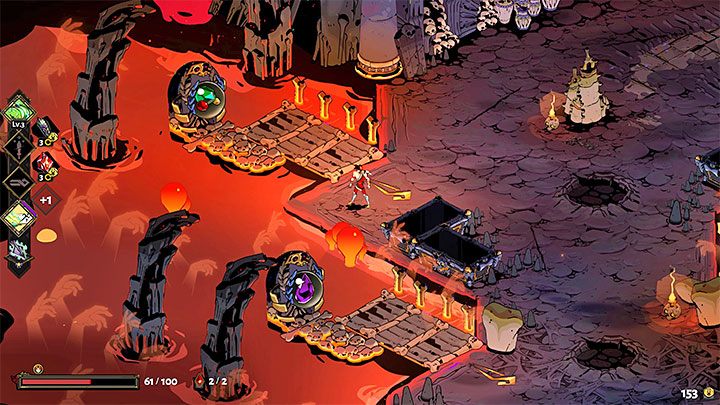 Some of the chambers you explore only have one exit, but you will often encounter rooms where you can choose between several passages (e.g. two or three). You shouldn't make this choice blindly, because each exit has its own sign, which suggests the type of chamber it leads to. For example, the Darkness sign marks a location where you will be able to obtain this resource, the pouch icon indicates a chamber with a store, and the sign of a specific god marks an area where you will be able to obtain the corresponding gift. We have compiled the most important signs on a separate page: Signs on passages - what do they mean?. We advise you to familiarize yourself with the signs that appear most often in order to remember their meaning.

You should select the next chamber according to what you currently need. For example, if your health bar is low, then look for chambers with a Centaur Heart, and if you plan to invest in new projects once you're done exploring, look for passages with an icon depicting the gems necessary to finance the renovation.

Always be vigilant - you can easily take damage in this game 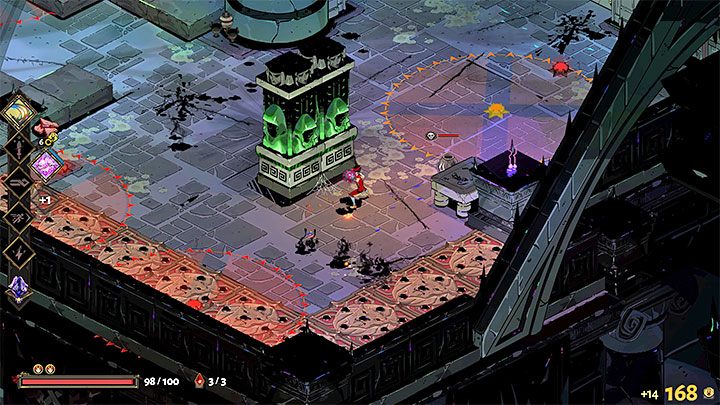 In the game Hades, it's very easy to lose health points, which will not regenerate automatically and will force you to play a weakened character for a while. This means that you should always be ready to respond to different types of threats. The most important of these include:

Check out the following pages for more tips and tricks: Flying projectiles - how to stop? and Traps - can you disarm?.

Think before you select a boon or upgrade 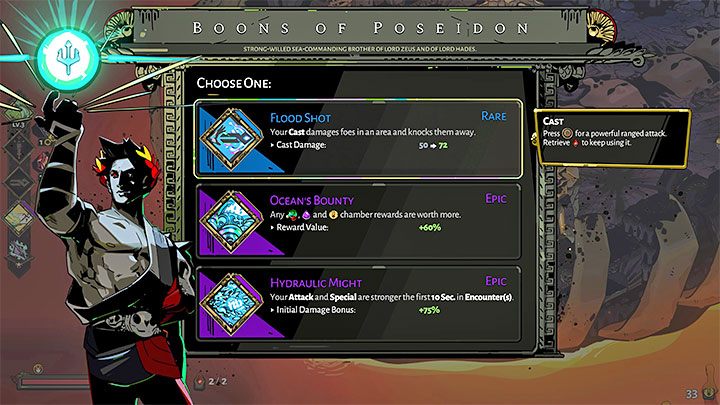 During the game you can encounter chambers that allow you to choose one out of several available rewards (usually three). This can be, for example, a boon from a specific god or a weapon upgrade that will increase its selected stats.

You should always read the reward descriptions and try to select the most valuable one. Consider the following factors when choosing an upgrade:

For more tips, check out the Rewards and upgrades chapter in which we described the most important types of prizes.

Avoid risky behavior while your character is weak 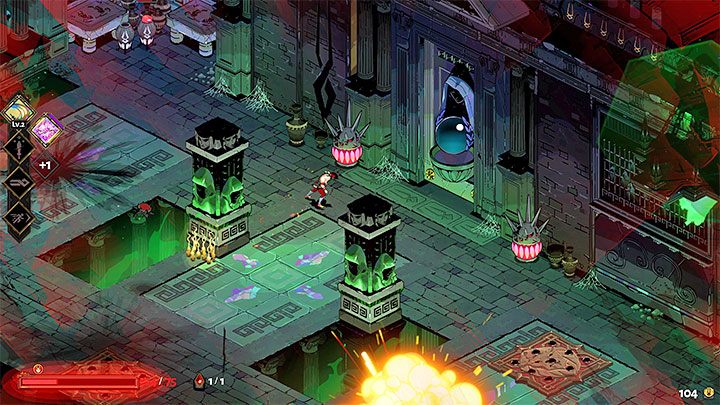 In the game Hades, your character cannot regenerate health by default. Because of this, losing any number of hit points is painful and potentially brings your character closer to death. You should start playing more cautiously if you're at less than half of your health bar, because even a single strong enemy attack could bring you to the brink of death. Mainly focus on:

More tips and information on how to stay alive can be found on the Recovering health - how? page.

Death is part of the game 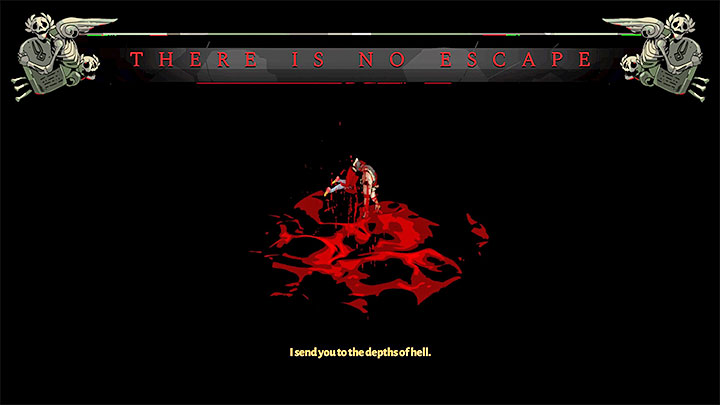 Death in Hades is a gameplay element that you have to come to terms with due to the game's strongly accented roguelike elements. Your first run will probably last a maximum of several minutes, because the character doesn't start out with any weapons, upgrades or abilities to help keep him alive. As you spend more and more time playing the game and also by learning its mechanics, you will be able to reach deeper into the underground and explore new lands and chambers. Don't get discouraged - traversing through locations and defeating bosses will get easier as you become more familiar with them over time.

At the same time, make sure to spend Charon's Obols often, as you will lose them upon death. The good news is that a large part of your progress is carried over to subsequent runs. This includes the abilities and weapons you purchase and the Darkness, gems and chthonic keys you gather. You can gain something from almost each new run - new permanent items and upgrades or simply knowing how to deal with specific situations in order to increase Zagreus' chances of survival in subsequent trials.

For more information on your character's deaths and keeping permanent upgrades and equipment, check out the Death - how to avoid? and Progress - what gets carried forward? pages. 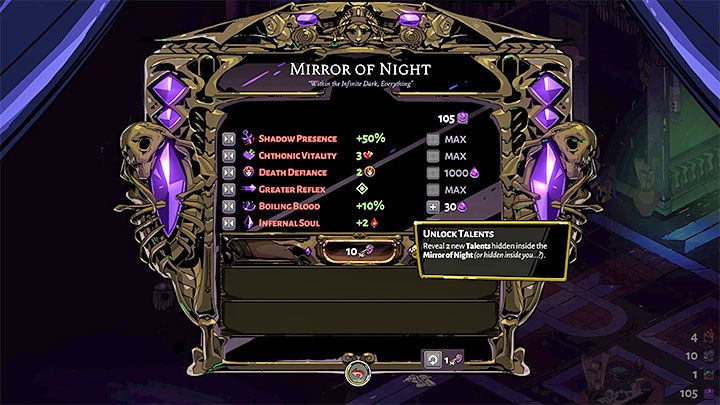 Remember that you can buy abilities at the Mirror of Night, which can be found in the main character's bedroom in the House of Hades. Darkness (one of the most important resources in the game) is used to buy abilities. Additionally, only a few abilities are available at first. You will be able to unlock more as you progress through the game and by using chthonic keys to unlock new items on the list. Abilities can have several levels - each level is more expensive, but also increases the effectiveness and usefulness of the talent. We advise you to unlock the first (cheap) level of each ability and then buy further abilities depending on what you need. In our opinion, the most important abilities are:

For more information about using your abilities along with more recommendations for unlocking them, check out the Abilities - Mirror of Night page.

Seek out opportunities to backstab your opponents 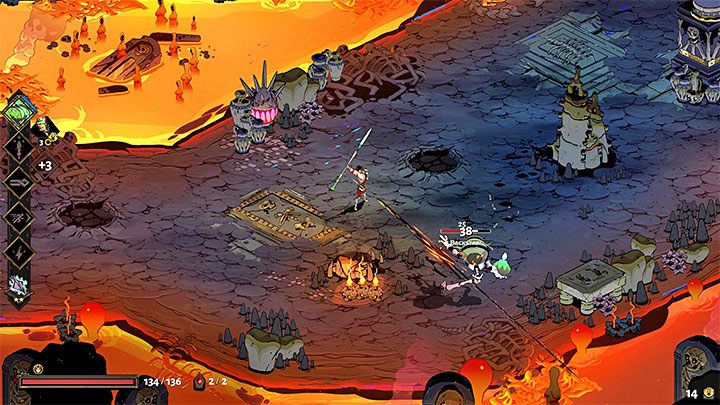 When fighting enemies in Hades, you can not only deal standard damage to them, but you can also use unique attacks that can weaken them more effectively. The most common type of unique attacks are Backstabs. These types of attacks deal more damage in themselves, but they also have some additional useful features:

You can easily backstab your opponents by quickly dashing behind them. They are also very easy to perform when using the Eternal Spear (one of the weapons in the game), because once you throw the spear, you can summon it back to you and it can backstab enemies on the way back.

More tips on this and other ways to defeat enemies can be found on the Combat page in our game guide.