Islands of the Skellige Archipelago are known for their corsairs and powerful ships, Drakkars, that can sail even during the fiercest of storms. The islander society is divided into Clans. Your army can include Clan an Craite, Clan Tuirseach, Clan Brovar, and Clan Dimun, among other ones. The army of Skellige is led to battle by King Bran, Harald the Cripple, or Crach An Craite. 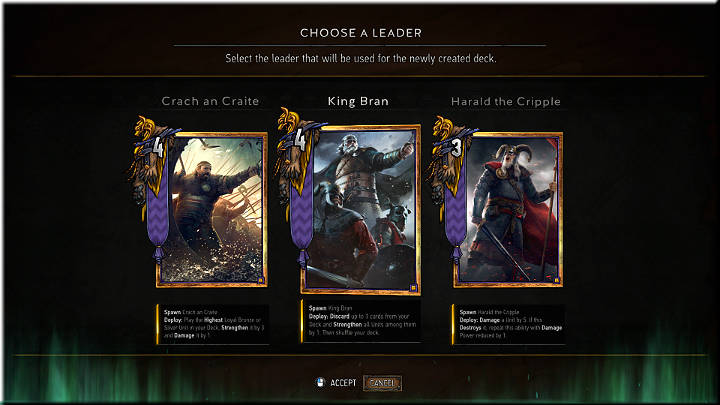 1. Skellige's domain is the ability to Resurrect units from the graveyard. Apart from Priestesses of Freya that resurrect Bronze cards, Skellige also has Sigrdrifa who can resurrect even Silver cards. That's not all, though, since there is also the Renew card that can resurrect a Gold unit.

2. Currently, you can encounter 2 archetypes of Skellige decks:

3. Skellige features a large amount of cards that let the opponent draw additional ones, thanks to which Skellige players can freely look for units they need to win.

4. If the opponent plays King Bran, he/she will probably Discard at least 3 cards to the graveyard in the first turn so get ready to destroy or move these units.

5. If the opponent plays Drakkars or Wild Boar of the Sea to boost Morvkvarg or Olgierd and you have Spies, you can easily thwart this strategy. Simply place your Spies in a way that boosts them instead of the key units. This forces the opponent to eliminate them to keep playing on his/her terms.

6. A boosted Morvkvarg or Olgierd can be countered well by Succubus from Monsters deck. Playing this card to the opponent's side lets you steal a unit and thus boost your own score.

7. Playing against Skellige, avoid placing a large number of units in a single row because these decks often include weather effects or Coral who damages all units in a given row by half their current Power.