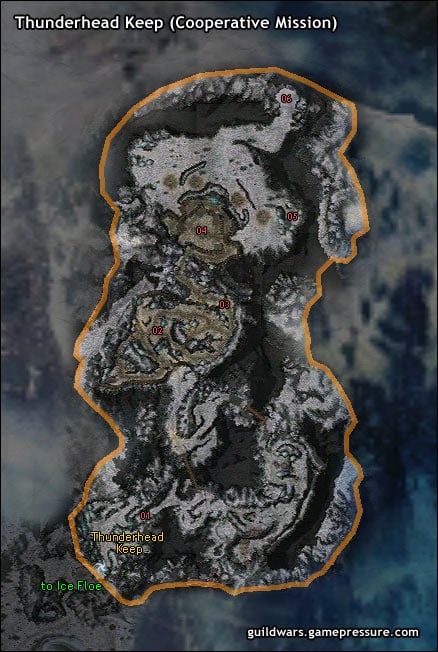 Within the last generation, Thunderhead Keep has become the capital of the Deldrimor nation. Since the Stone Summit uprising, it has served double duty as both the royal court to King Jalis Ironhammer and the last line of defense for the good Dwarves of Deldrimor.

You can enter this map by selecting "Enter Mission" Thunderhead Keep location.

After complete this Mission you gain access to Ember Light Camp in Ring of Fire Islands.

NOTE: Speak to him. He join party with few Dwarven Soldiers and open a gate.

You have to eliminate all groups of monsters here.

NOTE: After you kill Dagnar Stonepate you need to help King Jalis Ironhammer hold Thunderhead Keep. Stay close to him and eliminate all incoming enemy troops. Last monster to kill is left hand of Grenth - Confessor Dorian. After this go outside Fort to complete *BONUS*.

TIP: Use Torches to ignite the two beacons inside Fort.

06 Portal to Ring of Fire Islands

After complete this Mission you are teleporting to Ember Light Camp in Ring of Fire Islands.