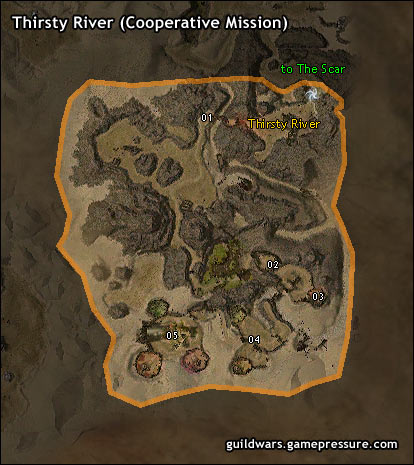 One look at this dry and desolate gorge tells the tale of its naming. Where once flowed a mighty river that shaped the land over millennia, now wind and sand make their way along deep channels, now little more than an echo of the past.

You can enter this map by selecting "Enter Mission" in Thirsty River location.

TIP: The trick is to attack only one team at time and kill all monsters, especially enemy Monk before 2 minutes time limit. If enemy Monk lives he will be resurrecting all monsters every 2 minutes. Always start to attack enemy team at the beginning of the time cycle. This is essential when you fight on multiple team arenas. Eliminate all enemies from one team first, then wait for resurrection cycle is turning on before you attack next team.

*BONUS* Cleanse the area before King Khimaar's spirit is driven away. Reward: 1000 xp.

You need to complete this Mission to unlock Ascension Mission.

*BONUS* Cleanse the area before King Khimaar's spirit is driven away.

NOTE: King Khimaar's is at the Arena 3. You need just be fast enough to get there before he leaves.

NOTE: You have to eliminate only one enemy team here.

NOTE: You have to eliminate two enemy teams here.

NOTE: You have to eliminate three enemy teams here. Start from the right (northern) team, then move counter-clockwise to the southwestern and next to the last one - southeastern team.