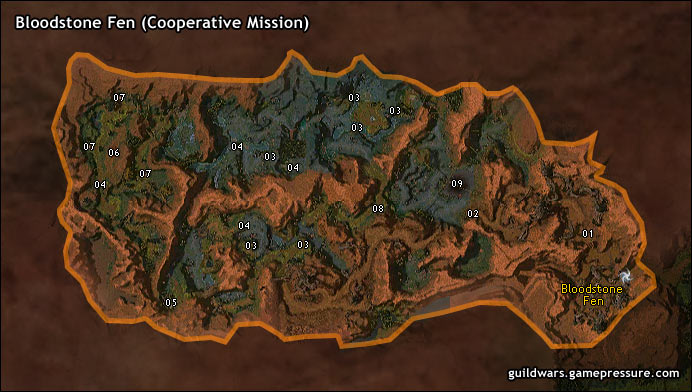 The floor of the jungle is damp and uninviting to anyone but thirsty beasts. In one particulary deep chasm lies the remnants of a powerful magical stone, said to be a relic from the time when the gods walked on Tyria. Not even the voracious vegetation of the Maguuma will grow upon its surface.

You can enter this map by selecting "Enter Mission" in Bloodstone Fen location.

Mission: Seek the truth about the White Mantle. Locate Blade Scout Ryder. He'll take you to the Bloodstone. Use the vine bridges to traverse the jungle. ADDED: Travel on to the Bloodstone on your own. ADDED: Avenge the Chosen by killing Justiciar Hablion. Reward: 1000 xp, 1 Skill Point.

*BONUS* Awaken the druids while preserving their guardians. Reward: 1000 xp.

After complete this Mission you gain access to Quarrel Falls location.

Saidra - She gives you a Vine Seed needed to create vine bridge.

Use Vine Seed to create the bridge,

You can get more Vine Seeds here.

*BONUS* Awaken the druids while preserving their guardians.

TIP: This quest is hard to achieve with henchmen because you can't harm any of Jungle Guardians even if they attack you. You have to place Vine Seeds on each of the small Druid Stones to awaken a Druids. The all Druids will head towards the large stone and summon the Elder Druid. Speak to the Elder Druid to complete *BONUS* Quest.

Elder Druid is summoned by the three Druids awakening at small Druid Stones.

He tells you about White Mantle treachery and ask you to avenge the Chosen.

Justiciar Hablion (Monster for main Mission objectives) Kill him and his guards. After defeat him you are moving to Quarrel Falls.