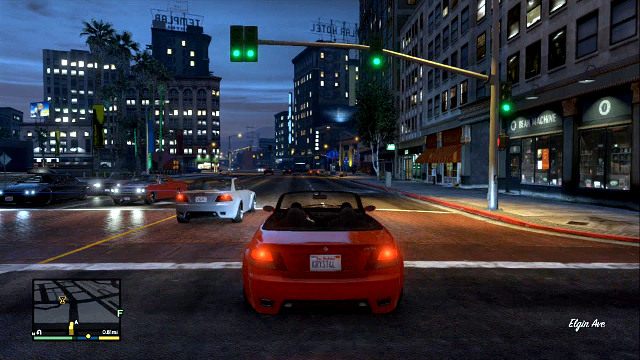 You'll drive for the most of the in-game time

Cars are the basic conveyance in GTA V. Each of playable characters has its own, personal vehicle which should be, in general, first for upgrading. But you don't have to limit yourself to only this one. To get a new car (or any other vehicle), you need to get close to it, use a key to get into the car. Then, the character will steal this vehicle. Speed of this process depends on the fact if the car is parked or not and its technical state. If the car is closed, you have to break in first, by destroying the window and start the engine, what takes precious seconds and isn't recommended when in hurry. If the vehicle is currently moving, your character will throw out owner from the inside and take his place. But you need to be careful, as some of people will try to retake their property by throwing you out, firing at you or even stealing other car and beginning a chase after you. While stealing, pay an attention also for neighborhood and presence of police. Police will react immediately if they see theft and start chasing you. What is more, some vehicles have alarm installed, which will attract nearby policemen even if they don't see the act of stealing. Alarm turns off after few seconds.

Stolen car may be inscribed to the particular character permanently by parking it in the garage. Then, even if it is destroyed, you'll find it again in your garage. And if you leave it somewhere in the city, or lost in any other way, you can find it in the police garage, from which you can regain it by paying 250$. If you want to increase limit of available cars, you need to buy new garages spread out in the whole city.

Cars can be modified by upgrading their performance, endurance, look and even the sound of horn. To do so, you have to visit one of Los Santos Custom workshops. But notice, that modifying a car also inscribes it to the particular character, what may be a temporarily way to control more vehicles when you have only one default garage in your Safehouse. Exclusive cars may be bought also in the Internet. 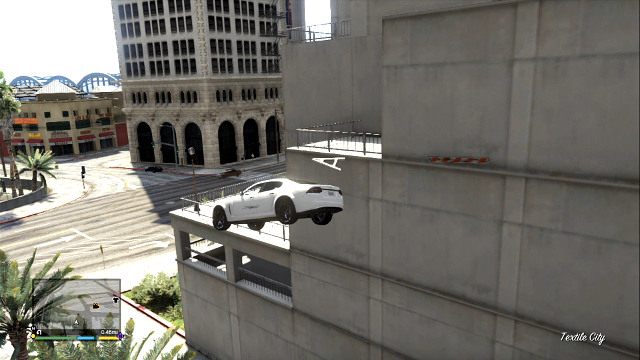 Basic controlling the car is contained in four simple activities. Speed up and brake/reverse on triggers, direction of driving on the left analog and hand brake on A/X. What is more, while driving, you can, among others use a horn, lights or change the radio station. Details can be found in the chapter dedicated to controls. But the very drive is concentrated on those four highlighted above which may be challenging for the less experienced players. Cars are rather sensitive and their physics may resemble the one from race games, so on the beginning you may experience slight difficulties with feeling the way you should control vehicle, especially on turns. If so, try not to accelerate too much in first missions and slow down while approaching a turn. Game is made in a way to not be a race challenge at the beginning, so even driving relatively slowly, you should finish all time missions easily. And, simultaneously, every driven kilometer will give you better feeling of controls and experience. Also the type of the car and character's driving skills are important. If you experiences difficulties on harsh bends, try to get a car with possible biggest adhesion. You should also remember about Franklin's special ability, which slows down driving and makes easier moving between obstacles and taking turns.

If the car is in the air, move your left analog to keep him stable on wheels during landing. Every successfully finished flight affects rate of driving skill development. If the car turns upside down, you can move it back on the road by moving the left analog side. You can also jump out from the rushing car by pressing a key for entering/exiting the vehicle, but it may seriously hurt your character, or even kill him.

While driving, you can also start firing by pressing and holding LB/L1 and aiming with the right stick. 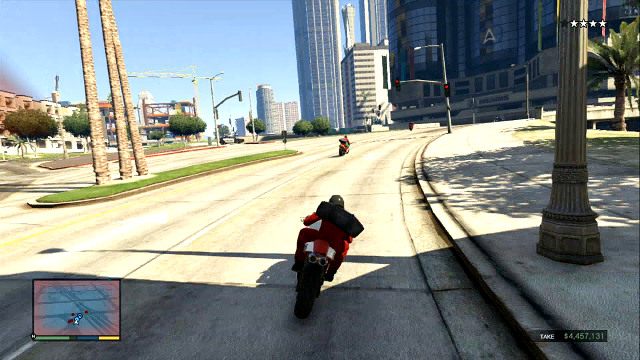 Motorcycles are controlled in a similar way to cars

Controlling monocycles, in general, is very similar to driving cars, but, additionally, you can balance your body back and forward by moving the left analog back and forward. When you move it back hardly, you can ride on back wheel, while leaning it forward during braking will make you stop on one wheel. If you ride on bike, you can also jump after reaching particular speed for acrobatic figures.

What is more, if you ride a bike, when you get a proper speed, you can jump up for a stunt. Bike is a bit different in a way of controlling, and instead holding speed up, you have to constantly propel it up with pressing A/X.