In this section of our guide to Griftlands, you will learn about the types of cards and their distribution. You will also learn about the effects and synergies commonly used in Griftlands. At the end we will provide info about several types of decks and explain the principle of their operation.

In Griftlands we have two separate decks. One for negotiations and one for duels. At the beginning of the game we receive a set of two basic decks. You can see them when you start a new game. Each deck has its own types of cards. Each set has a different background color and an icon on the left side of the card name. We distinguish the following groups of cards:

All cards have a rarity level. These can be distinguished by the color of the frame. The first are the Basic cards, which player gets in the beginning of the game. Then you have Common, Uncommon, Rare and Unique cards at your disposal. They differ in the availability and price if you decide to buy them from a trader in the in-game store. 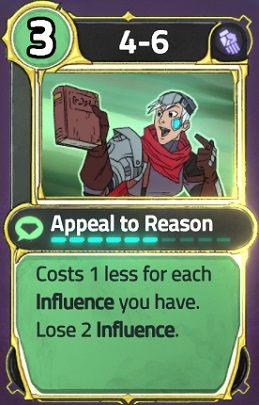 Each of these cards has unique and additional features. In the upper left corner you can see the number of action points necessary to play the card. In the right one you can see the symbol of the deck to which it belongs. This is especially useful when you choose one of the three cards to be included in your deck. There is a damage interval in the middle of the card. Under the picture you can see the name of the card. To the left is the symbol of the group to which the card belongs. Below you can see the experience bar of the card. If you play this card a sufficient number of times, you can improve it in one of the two evolutionary ways. At the bottom there is a space in which card features are described. When you move your cursor over bold phrases, you can check the additional information.

An important issue is the possibility of acquiring new cards. At the beginning of the game you receive them for completing tasks and for winning duels or negotiations. Also, you can receive them as a gift if you have a good relationship with a character, or buy them from shopkeepers, mainly from the item group. In the evening, at the end of the first day, you get access to the Roadsite market. You can buy negotiation cards, duel cards and graphs to your armor.

Most of the cards in your deck have some additional effects except for pure damage. An exception to this is the Basic card from the basic set, but even those that have been upgraded receive additional abilities. We provide detailed information of card effects and card abilities in the list below:

In Griftlands, you have the ability to upgrade your armor. That's what Grafts are for. They allow you to earn bonuses in negotiations or during a fight. Like cards, they have different degrees of rarity. Some of them have only positive bonuses, but there are some that give you a penalty in exchange for the bonus.

For example, there are 3 Grafts below. The first "Quick Strap" gives you one additional action for each turn, but it gives you only one evolutionary option to choose from when improving duel cards. Another "Coactive Orbslug" gives you a bonus of 2 points of damage to a random opponent while gaining Influence. The last "Calamity Jar" gives you an extra action point per turn in duels. In return, you can't have an animal to help you in fight. 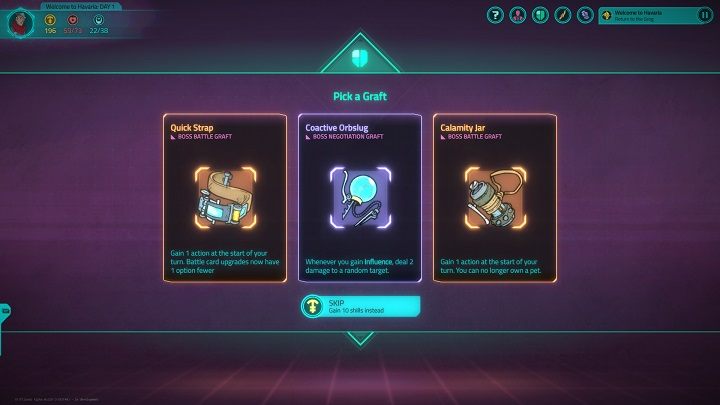 Examples of Grafts to choose from. This is a reward for defeating one of the bosses.

Grafts can be easily distinguished by the color of the frame. The orange color refers to the duels, just like the cards in the Attack group. And the purple frame means that this Grafts are used in negotiations. Just like the negotiation cards from the Manipulate group. You can preview the current reinforcements by clicking on the green shield icon in the upper right corner, or by pressing "G" key. Also, during duels or negotiations Grafts are displayed at the top of the screen. So you can monitor their current effects on an ongoing basis.

Another aspect is getting these improvements to the armor. There are a few options how you can get them. The easiest way to get them is to complete quests and fight bosses. We can also buy them from shopkeepers. When you travel on the map there is a chance of a random event occurring. One of them is an event when you meet a trader who has some Grafts in his offer. Another way is to buy them on the Roadside Market from Plock "The Swab". If you want to get a discount on their purchase it is worth to do its job. This will give you access to the market and a special offer to buy Grafts.

Griftlands differs from other card games - you do not have the full control over cards in your deck. At the beginning of each game you get 2 basic decks, to negotiate and to fight. Then, as the game progresses, you gain new cards and improve the existing ones. It is worth noting here that you do not always have to match the card to your deck. In return, you can get 10 shills. This is a rather poor reward, but sometimes it is better not to choose a redundant card. 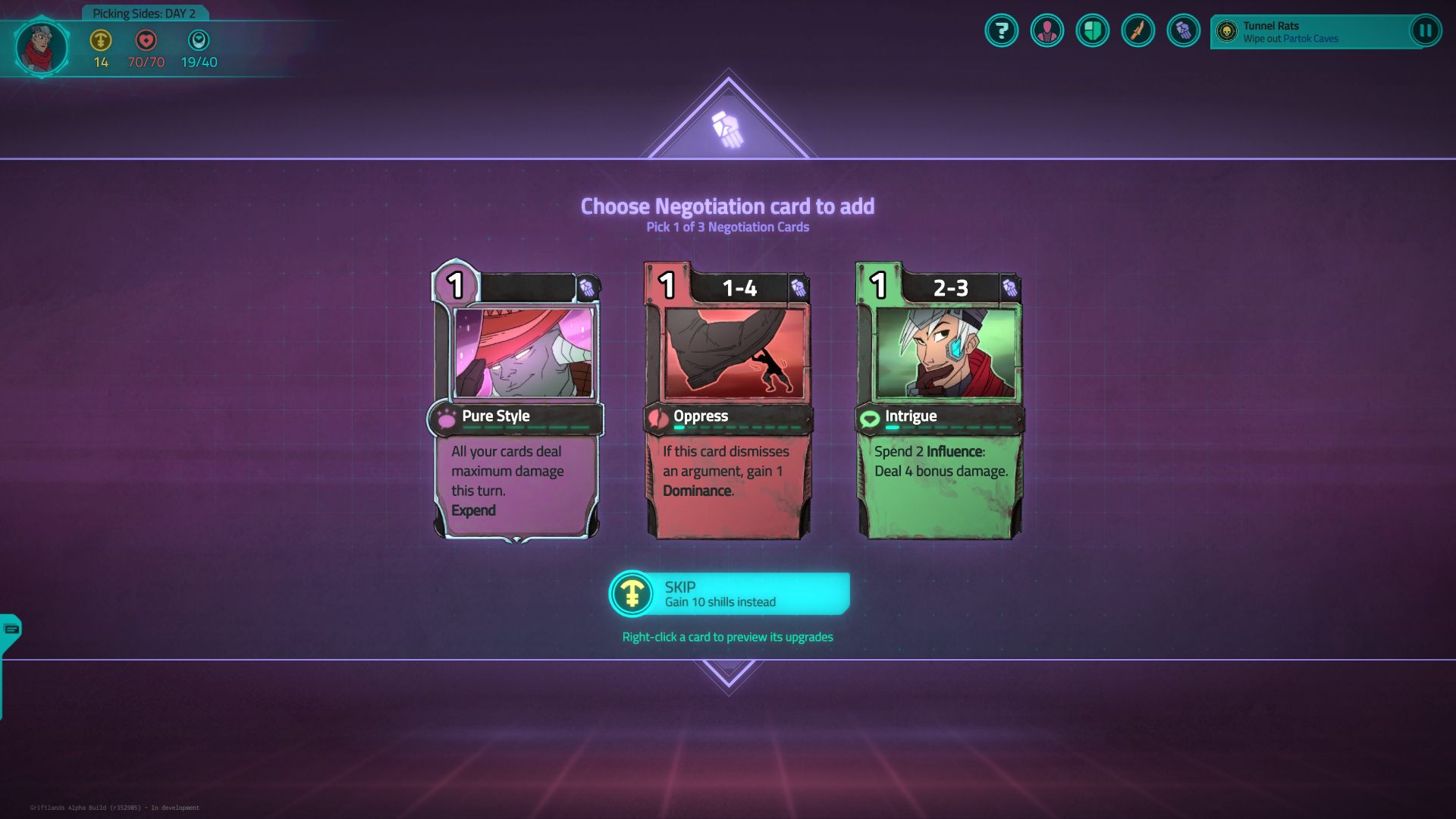 A good deck should not have too many cards. The smaller the set, the greater the probability that you will choose a card or set of cards that can be used to cause lots of damage.

There are two types of negotiation deck. The first one depends on using Diplomacy cards, those with a green background. The second one is based on Hostility cards, red background. This division originates from the evolution of the basic card which is "Sal's Instincts". It has 2 stunts that work well with one of the two sets of cards. 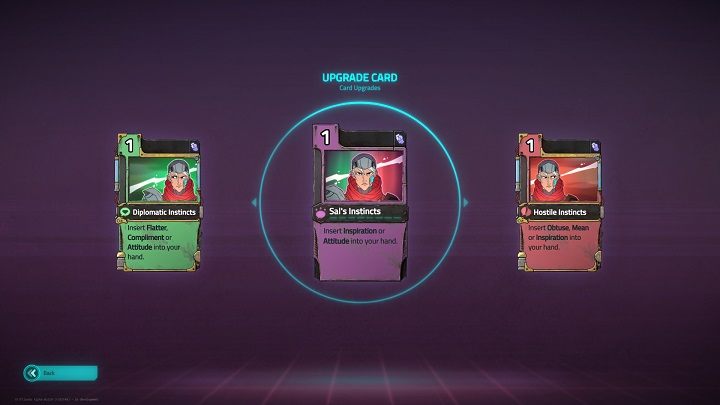 Because of this card it is good to decide which style you want to play from the very beginning. I can see from experience that both decks work well as long as you have good cards. Also, remember not to stuff and overload the decks with unnecessary cards. However, if you have any card you want to get rid of, you have 3 options. The first is to remove it for a fee on the Roadside Market. The basic fee is 50 shils, but it may be different because of our relationship with the seller. Another option is to remove the card in the form of payment for the task. After completing it you can choose from which deck you want to remove one card. The last way is to keep the card in your deck, when you play it enough times you will get the possibility to evolve it. One of these evolutions may be a possibility to destroy it after it's been played. This is particularly common for cards in the basic set. At the beginning I used it for Hostility group cards myself, building a deck from Diplomacy cards.

The first deck consists in earning Influence points that enhances cards in this group to deal maximum damage. These points reinforce your cards from the Diplomacy group too. The second one is to gain Domination points, which add one point of damage to Hostility group cards.

Things are different for duel decks. Here you do not build a deck of cards on a specific set of cards but on the basis of a unique status. It's about Attack cards, which have Combo or Bleed in their description. As before, it applies to the cards from the basic set, that is, "Sal's daggers". This card has 2 evolutions, one of which works well with Combo points and the other with Bleed points. 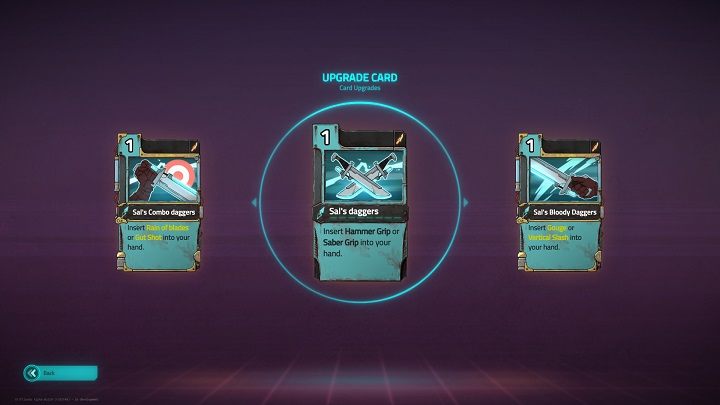 The first deck consists in earning Combo Points, which you can use to play additional card skills. They are also used to deal large amounts of damage with Finisher cards. The second deck uses the Bleed points inflicted to your opponent. When playing this deck you have to be careful not to mistakenly kill your opponent, I did it myself several times.