In the first chapter of the Griftlands Game Guide, you will find a handful of tips and tricks. Our guide will help you in starting the gameplay without any problems. Below we have provided a list of a few tips and tricks to make it easier and much more enjoyable for you to start playing Griftlands.

Choose gold as a gift from Fssh

At the beginning of the game you go to the bar of your old friend Fssh. She offers you help and accommodation. Also, she offers you 3 random starter prizes. This pool contains Shills, the Griftlands currency, extra space in our armor (inventory) for items, card upgrades, cards themselves and basic statistics boosters (health and resolve). The best of these awards is gold, but you don't always have a choice of gold. In such a situation it's worth improving one of the cards, to draw 2 cards for a negotiation deck or a battle deck and to strengthen the statistics. Improvements in armor are not important in the initial phase of the game, and reusable cards are often not very profitable. 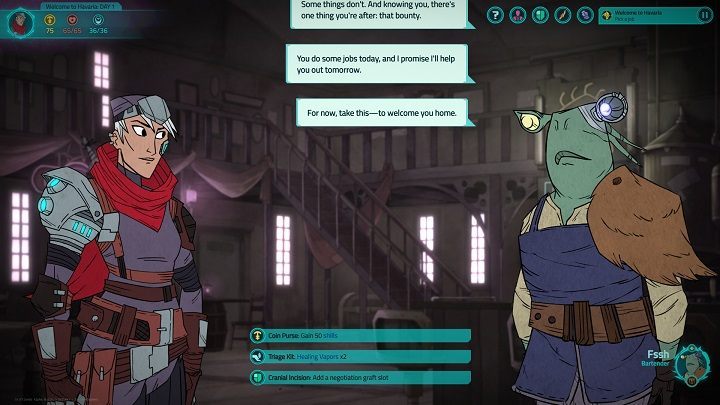 Example of starters: 50 gold, 2 single-use cards and an additional slot in the armor for the item.

Negotiations are a safer form of combat

Usually negotiations are easier than using fists. In particular, if we talk about opponents stronger than ourselves. If you lose the negotiations, you lose resolve points and may not be able to complete the current task. In the case of a fight, the situation gets worse because you may end up with a game over. Another plus of the negotiations is a cheaper opportunity to buy support. If you go to any location and there are other companions in it, you can bribe them to help in the negotiations or in the fight. Of course, in the case of negotiations, it is cheaper. 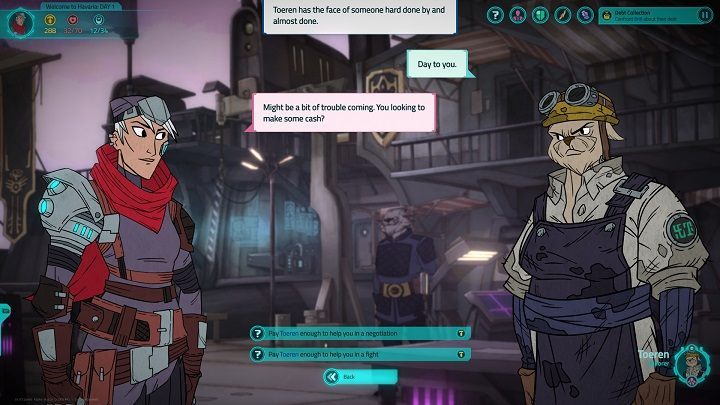 Carefully read the descriptions of the cards

It may seem prosaic, but some cards give you benefits if you play them at the beginning of a turn and others at the end. Griftlands has a lot of card effect mechanics. However, do not be afraid of them at all. When you hover over the card on the right side, you will see a glossary of terms that will dispel all your doubts. This way you can find out how a card will work if you play it, how much damage it inflicts and what benefits you may receive.

After each battle you win, you get a "resolve" - it's a form of return

As I mentioned earlier, negotiations are better than combat. However, some missions require you to use force. It may also end up with a 'resolve', which is required for negotiations. In such cases, you must demonstrate your combat skills. After winning the battle, you get rewards in the form of cards, items or gold. An additional prize is the restoration of several points of "resolve". There are other ways to regenerate these statistics. In the bar at Fssh you can buy a beverage that will renew 10 points for the price of 22 gold. Another way is to complete the mission. After finishing some of them as a reward, you can choose to regenerate 10 points of health or "resolve". There is also the possibility to meditate, or chat with our friends. The first way is not recommended, because you may be exposed to loss of health or additional duels.

When accepting the mission, it is possible to agree on additional payment in the form of gold as a bonus. Such a negotiation is no different than any other, except that when you take down the opponent's arguments you get additional Shills to pay for. After each turn the amount of gold for breaking an argument is reduced by 25%. Usually you will be able to negotiate the lowest rate without even a single resolve point being lost. However, you may be able to spend a few more points to get a bigger bonus. But you have to count your strength on your intentions. You can also negotiate, which results in the loss of negotiated bonuses, but you will not recover the lost resolve points. 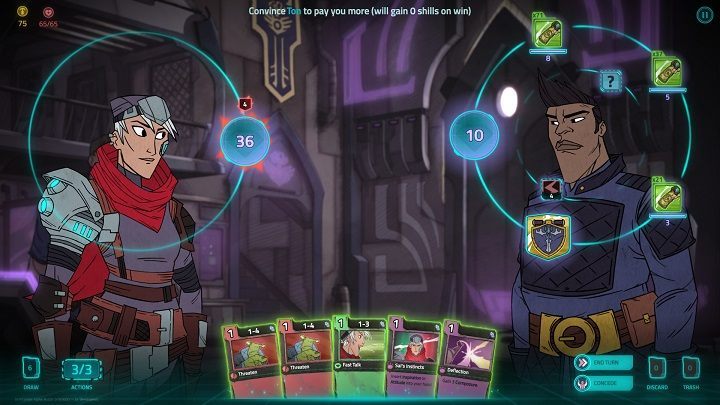 Having friends is important...

In Griftlands there is a system of relationships with characters living in the game world. There are 5 different states of relationship with the hero: someone loves, likes, dislikes, hates us or is neutral towards us. If the character likes you, he or she can help you with negotiations or if he/she is a merchant, you may get a discount. And if a character loves you, then you get a bonus from him or her. It can be extra health points or extra damage for your first card. You achieve this by performing tasks from the character or by giving him/her a gift: 100/150 shills. Also, if you have a good relationship with a character, you can count on additional events on the map. You can get a gift from her/him, come talk to her/him, so that you can recover a little "resolve" or help her/him with some problems. 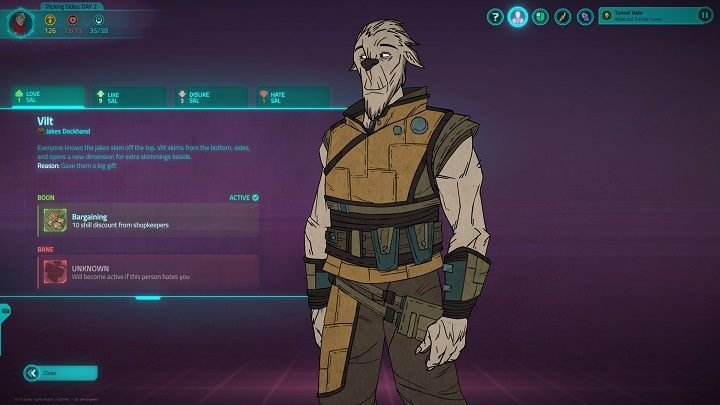 Having a very good relationship with other characters, you can count on a variety of bonuses.

...just as important as not having enemies

There is another side of the coin. If a character doesn't like us, it'll make it harder for us to negotiate. And if any character hates us, we will receive a punishment from him/her in the form of lowering our statistics or difficulties during the fight or negotiations. This character can lure you into an ambush when you move around the map. A hero may have a negative attitude towards us if we win a duel against him/her, kill his/her companion from a given faction or if we choose someone else to do the task. At a later stage of the campaign, the latter reason is unavoidable. For this reason, it is necessary to find a balance in the performance of tasks and sometimes give up the better reward for better relationships. You can always improve the relationship with a drink at the bar. 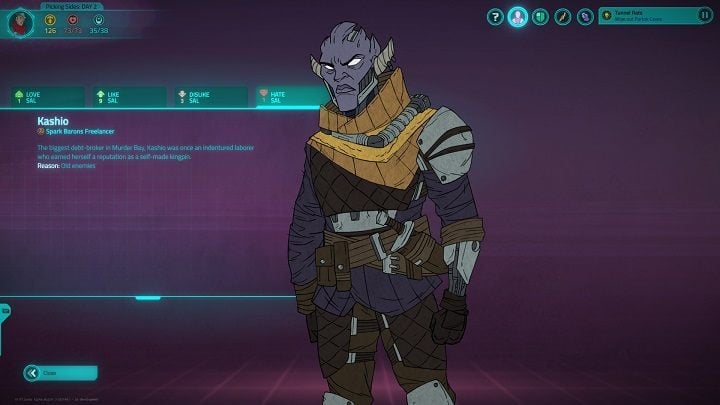 Kashio is an example of a character who hates you from the start, however you don't get any punishments because of it.

Do not kill your opponents

By having a duel with other characters in Griftlands, you can cause them a state of panic. In the state they announce their willingness to surrender and a white flag appears above their heads. This state lasts for 3 turns. If you fight more than one opponent, they all need to be in a state of panic in order to surrender. This mechanics is so important that it saves your health points during combat. Also, without killing the opponent, you do not expose yourself to aggression from his/her friends or companions from his or her faction. 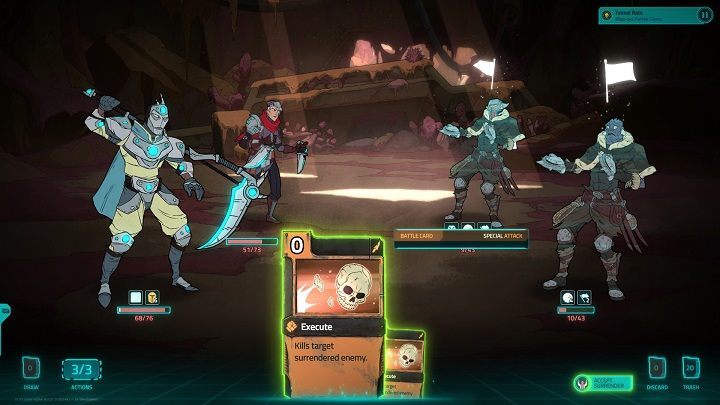 When you make your all opponents to panic, the execution card appears in your hands and a button in the lower right corner to accept enemy's surrender.

After sleeping through the night, your health and resolve points are restored.

No matter how well you play duels and negotiations, you will still lose more or less of your initial statistics. In case of losing the whole "resolve" you can continue the game, but without the possibility to conduct negotiations. As far as health points are concerned, they are required for further gameplay. If during one of the fights you lose a significant part of any of these statistics you can go to the Fssh bar where for a few gold pieces they can be renewed, but not in full. The only way to fully regenerate your HP points and "resolve" stat is to go to sleep. In the same bar that belongs to Fssh, you can rest and regenerate. But you can't do that when you want to. After completing the main tasks, a night will start in the game world. When you get to the bar, a new dialog with Fssh will appear, which allows you to sleep over night. 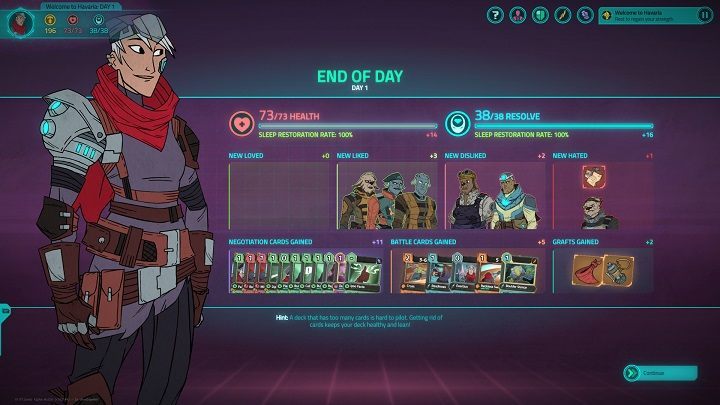 After going to bed, you will see a screen summarizing what relations you have achieved and what cards and items you have obtained.

Do not buy single-use cards

In the game, in addition to the standard cards, there are also cards that you can play a limited number of times. You can get them as a gift or obtain them as a task reward. In this case, these cards are profitable. However, in no case is it worth buying such cards from shopkeepers. At a similar price or even cheaper you can bribe a character to help you with the problem. Moreover, players may not be sure whether they will choose such a card at the right time or whether they will have enough action points to play it. 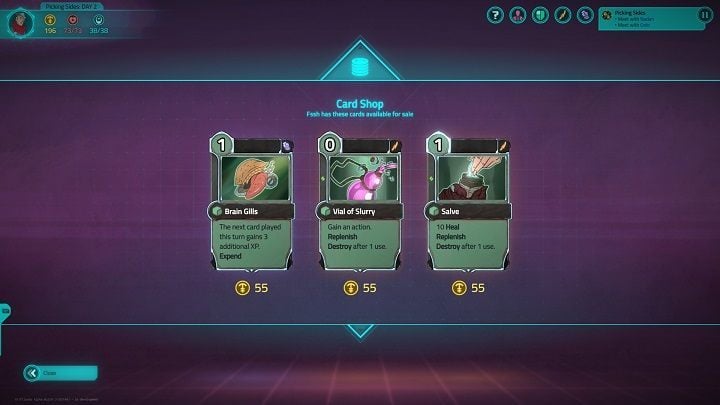 In this case, good relations with the merchants reduced the price of cards by 25%, but they are still far too expensive. The exception is the first card, which will not be destroyed after use.
See/Add Comments
JOIN FOR UPDATES