Your adventure in the jungle begins. This guide to Green Hell will help you learn the basics of survival in the wildlife. Here, you will find information and necessary advice related to this survival game by Creepy Jar. The guide is divided into three sections. They contain specific information related to all the most important gameplay mechanics.

The first part of the guide are descriptions of the gameplay mechanics. Here, you will find information related to gameplay aspects such as taking care of physiological needs, environment exploration and crafting. You will also find general advice - a collection of basic information to help you start your adventure.

The second part of the guide is the FAQ section. It contains answers to questions that may arise during your adventure. Here, you will find out, among other things, which blueprints are most useful, where you can find clean water and which place is best suited for a camp.

The last part is the appendix, where you can find information about the controls and hardware requirements.

Green Hell in a nutshell

Green Hell is a survival game created by independent studio Creepy Jar. This studio consists of a large part of the people responsible for creating such productions as Dying Light. You play as a man lost in the Amazon jungle.

Your main task is to take care of basic needs, such as thirst and hunger. To do this, you need to learn how to make fire, fish, and hunt, or use the collected resources to craft objects and traps and to build shelters.

You must also remember that you aren't immortal. The jungle is full of dangers that can seriously affect your health. The protagonist can sustain damage either from predatory animals or falling from a height. He may also become a victim of diseases or parasites.

Isolation and illnesses affect the mental condition of the hero. This means that you need to keep an eye on this aspect, too. It is also important to locate and eliminate the problem efficiently.

What platforms is Green Hell available on?

Green Hell is only available on PC. 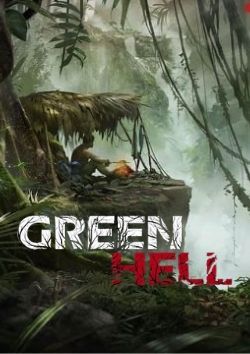 A survival game, in which you find yourself stranded in the Amazon Jungle. To survive, you have not only to gather food and water, but also learn to light bonfires, hunt, craft useful equipment, and build shelters.

Green Hell is a survival game by an indie Polish studio Creepy jar, whose members used to work on such games as Dying Light and Dead Island.

In Green Hell you play as an unfortunate man left for dead in the Amazon Jungle. At the beginning, he only has a radio, through which he can talk to his girlfriend, and he has to learn the art of survival in order not to die a horrible death.

Green Hell is an FPP game. Your main task is to gather food and water for the protagonist, or else he won't live long. You also need to learn how to light bonfires, fish, and hunt, as well as use various resources to craft items (including weapons) and traps, and also build shelters. You can also try farmingeverything that increases your chances of survival is good.

However, even the most skilled survivalist wouldn't get through such an adventure unscathed, and so the protagonist sometimes gets wounded (e.g. when fighting predators), falls ill, or catches parasites. Such situations affect his mental state, and can even lead to madness. Thus, it is smart to keep an eye on his mental and physical well-being and use the body inspection mode as often as you canthe mode allows you to diagnose the problems and get rid of them.

The game features a complex simulation of the Amazon Jungle; the wildlife activity depends on the time of the day and weather conditions, while the environment changes depending on your actions. Green Hell also features high-quality visuals.

This site is not associated with and/or endorsed by the Creepy Jar or Creepy Jar. All logos and images are copyrighted by their respective owners.