This page of the GreedFall guide has a mini FAQ. We have listed a few question that can potentially interest you - before playing GreedFall or shortly after starting the campaign.

Is Greedfall an AAA game?

No. Greedfall is much smaller than a typical AAA game. What's more, in many places you can witness the low-profile of the game and some poorly designed solutions. Greedfall is the most extensive title of Spiders studio, but it's still the AA title, which could use more polishing. However, this does not change the fact that Greedfall is a typical RPG, with a large number of quests, numerous choices and interesting exploration.

Who is behind the creation of the Greedfall?

GreedFall is an RPG with distinctive elements of the action game. The title was developed by Spiders studio, which has in its portfolio such titles as The Technomancer or Bound by Flame. The game was published by Focus Home Interactive.

GreedFall and Elex/Gothic - are they similar?

Not necessarily. Greedfall is much closer to Dragon Age Inquisition - you travel through vast, closed locations and discover question marks on the map. In addition, you have companions who give you side missions and you can have romances with them. Elex/Gothic have an interesting development system, where you can create hybrids of different classes and play with interesting builds. However, there will be no exciting explorations here, such as mysterious ruins or the choice of just one faction that you may join.

Saving the game whenever you want - is it possible?

Yes. You can save the game at almost any time by using manual or quick saves. We recommend saving the game before each battle or a conversation in each of the quests. This will allow you to return to a previous save and prepare yourself better for the upcoming battle or test other options of completing a quest (some choices in quests are mutually excluding).

Is Greedfall a difficult game?

Time of day - how to change? 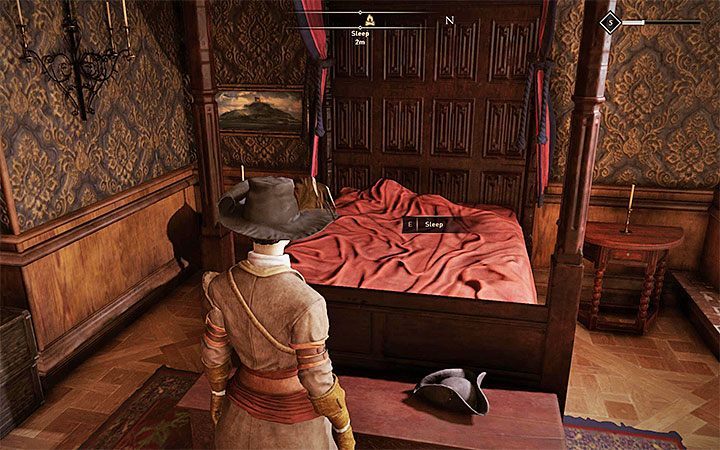 You can travel through the world of GreedFall at different times of the day and night. As a result, you may want to visit a specific location at a different time. Rest to change the time of day.

The easiest way to rest is to visit one of the houses belonging to the main character (one in each main quest) - you can interact, for example, with a bed. Rest is also possible in each camp of your team - simply approach the campfire. After confirming that you want to rest, you can choose the time of day (e.g. dawn.)

Can I remove the mark from the hero's face? 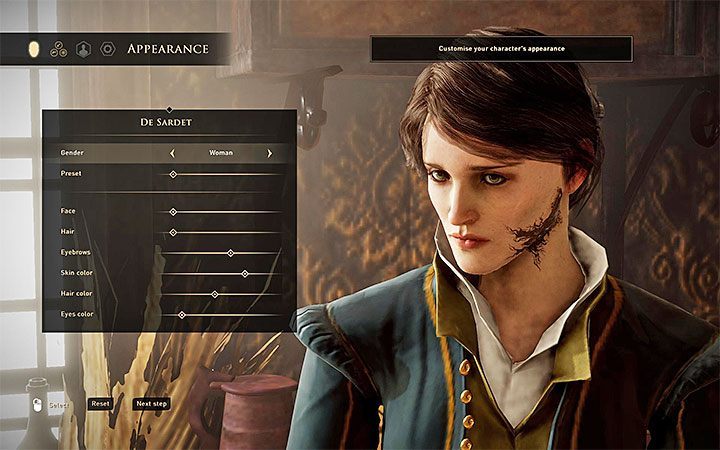 The mark is visible on the face of the main character right from the beginning, when you are in the character creator screen. You can't get rid of it no matter what settings you choose for your character. This is not an omission on the part of the developers, only the effect of one of its main features. Your character in GreedFall is one of the thousands of people suffering from Malichor. The mark is just one of the side effects of the disease and it shows that it consumes the body of your character.

More information about Malichor disease can be found on a separate page of our guide. Finding a cure for this disease is one of the main goals of the game. We recommend checking A Cure for Malichor section in our walkthrough.

How many members of the team can travel with you? 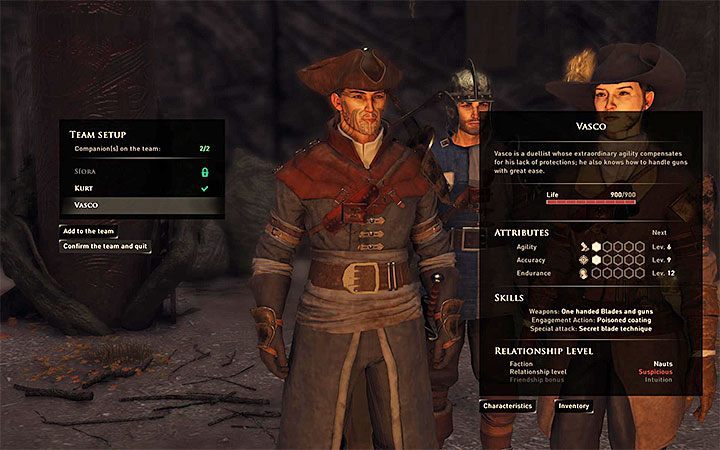 You move in a team consisting of three members - it consists of your character and two companions controlled by artificial intelligence. Since there are more than 2 people in your party, not every team member can travel with you at any given time.

Collectibles - are they in GreedFall?

No, GreedFall doesn't have typical collectibles/secrets. You don't need to deal with finding any notes or other similar secrets.

It is worth noting that in GreedFall, you can find unique legendary items, as well as visit skill shrines. However, these elements can't be classified as collectibles.

GreedFall - does it have a DLC? 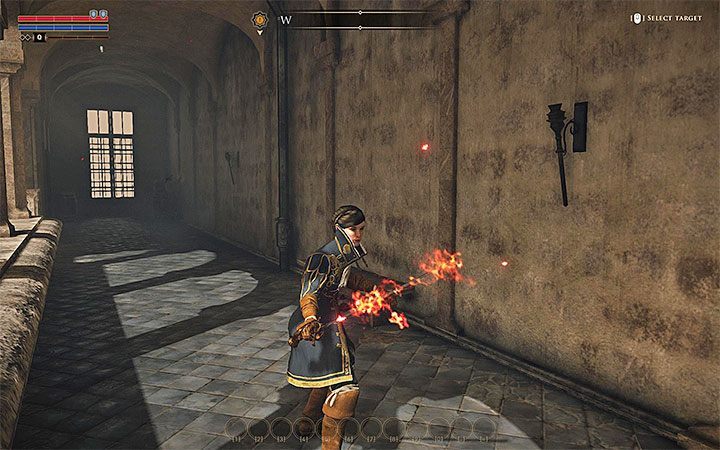 No, the authors have no plans for story DLCs. The exception is Adventurer's Gear available in pre-orders. This pack includes several clothes and unique weapons, depending on the class selected at the beginning of the game. The above picture shows Adventurer's Gear for the warrior class. It includes, e.g. a flaming rapier.

Can I skip the cut-scenes? 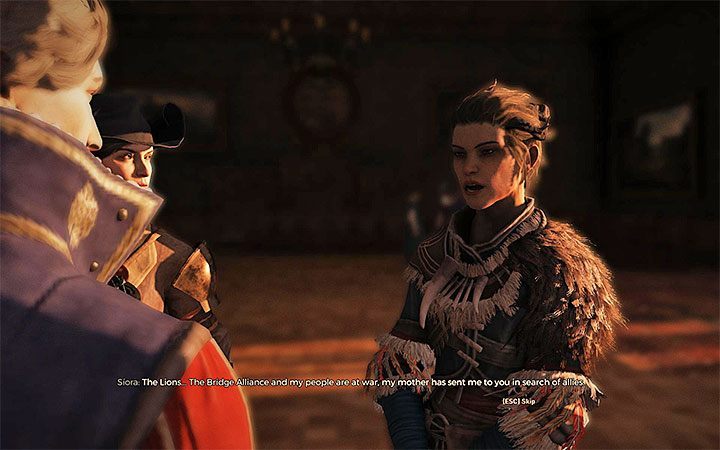 Yes, you can skip the cut-scenes. On the PC version, you can press Backspace or ESC (depending on the cut-scene, only one of these keys will work).

You can also skip conversations with other characters. You only skip the current dialog line of the protagonist or an NPC. You don't skip the entire conversation. You can use this method, for example, if you have already read the subtitles before the character spoke out their line.

Crafting - is it in GreedFall? 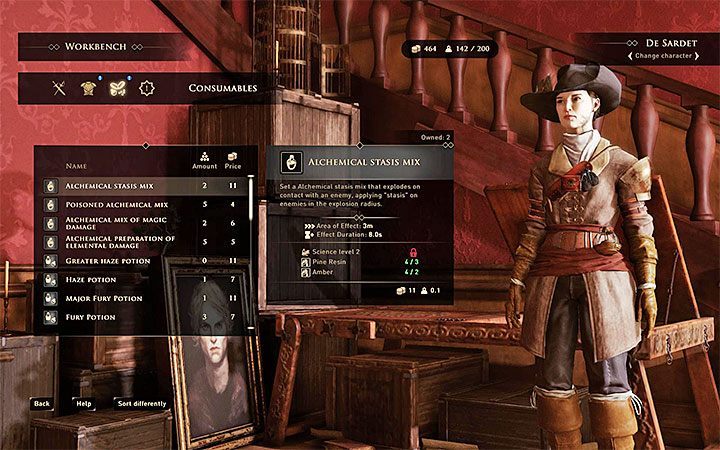 Yes, you can (and even should) rely on crafting. In GreedFall, crafting has two main uses:

Crafting is only available after a number of requirements have been met:

GreedFall PC requirements - are they demanding?

No, hardware requirements of the PC version of GreedFall are not very demanding. It should run smoothly even on a few years old rig and even at higher detail settings than low. For complete information, please refer to the System Requirements page of our guide.

GreedFall platinum trophy - is it hard to unlock?

Unlocking the platinum trophy in GreedFall can be quite challenging. The biggest difficulty is the requirement to finish the game at highest level of difficulty - Extreme. It is characterized by much harder fights - enemies appear in larger groups, are faster and deal more damage.

Other problematic trophies are those related to choices that may be mutually exclusive. If you don't want to complete the whole game several times, it's a good idea to save game manually before each important decision. There is also a bit of grind awaiting you that consists in killing several hundred enemies in specific ways or unlocking all abilities. You can find an overview of all available trophies and achievements in our trophy guide.

Language - can I change it?

Is the world in GreedFall big? 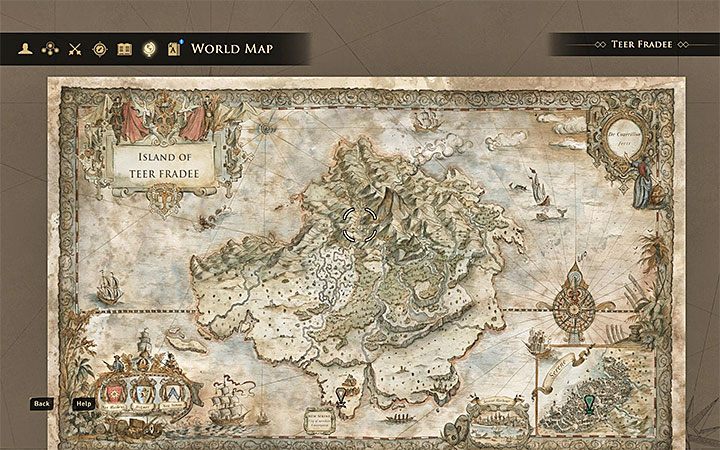 The world in GreedFall is quite large. The prologue is played out in a relatively small town, but after that, you get to the Island of Teer Fradee. A thorough exploration will take a lot of time - there are large cities, vast terrain, or dungeons with monsters.

In GreedFall you do not travel on a single big map, like in the likes of Skyrim. Instead, you have a few smaller regions. Having reached the edge of your region, you can decide to move to another area.

our world atlas for GreedFall includes a high-quality maps of the world. All the main locations that you can visit are marked there. Each of them was also described in detail.

Jumping - is it available? 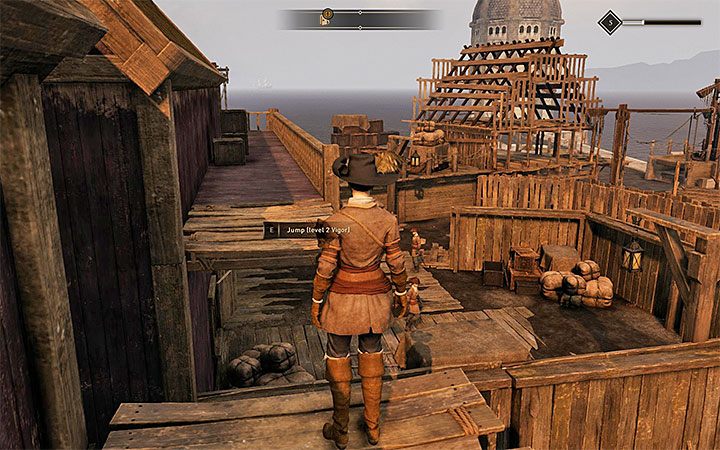 No, GreedFall doesn't let you freely jump. You can only do that in certain spots. See an example in the image. Here, as you may also see, the game requires 2 points of Vigor to be able to jump to the next balcony.

This doesn't mean that you can't climb at all in the game. Some walls are interactive. After standing near a wall like that, you can decide to climb it to bypass an obstacle, for example. In addition, the main character can also use ladders.

Why can't my character move on? 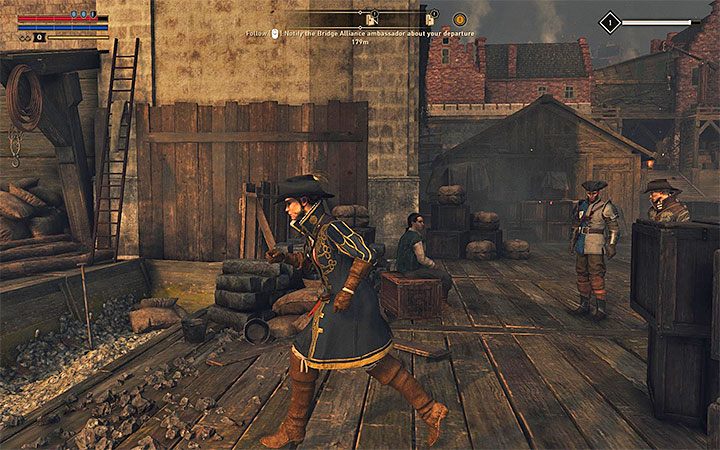 Some of the locations in GreedFall have invisible walls. They can prevent you from going further, even if there is no visible obstacles. If you run into an invisible wall, turn around and leave the place. Trying to get around it would be a waste of time.

Why can't I create an object? 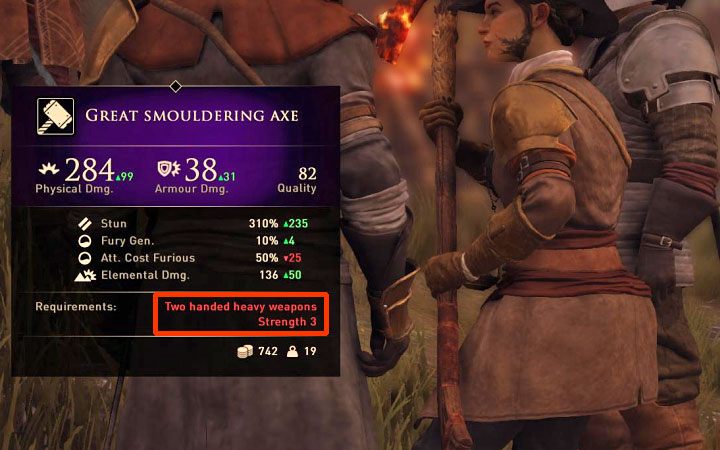 That's simple - some weapons and armors in GreedFall require certain stats from the hero. The game will not allow you to use this item until the requirements are met.

Information about the requirements for weapons or armor you can read by selecting an item from the inventory or the menu of the merchant. In the example above, the axe can only be used after unlocking the One Handed Heavy Weapons skill and increasing the strength attribute to 3.

Pickpocketing - is it available? 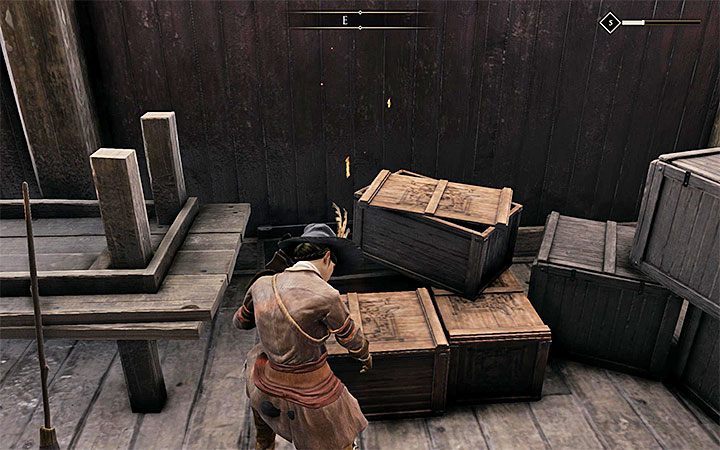 No, GreedFall does not include pickpocketing mechanics. You can't steal from enemies. The good news is that you can safely take valuables from boxes and other containers, even if they are in someone's dock or near a merchant's kiosk.

Watch out in the locations that are restricted areas (such as places protected by factions). You have to sneak or wear a disguise if you don't want to be spotted (attacked) or loose reputation.

Level cap - is it in the game?

Yes, GreedFall only lets you get to level 99. Chances of reaching the cap in one playthrough are slim, but GreedFall lets you grind by, for example, fighting on arenas.

Most important PC key bindings - which ones?

Below you will find a list of the most important controls and key bindings of the PC version of GreedFall. For full information and detailed description of all button functions of PS4 and XONE console gaming pads, please refer to the Controls section of our guide.