Welcome to Liberty City. This mission starts with a ride to Roman's place. Learn how to drive and go there with the help of GPS. Go upstairs - in this room you can save your game, change clothes or just watch the TV. Go to the place marked R on the map. You will meet Roman there. Reward 25$

Give Roman a lift to his work and then follow the GPS. When you're done parking your car (1) Roman will ask you for a favor. You're to look for any suspicious looking guys. Loan sharks want their money back so Roman isn't too keen on meeting them. Look around using left analog stick. When you see two guys walking into the shop, call Roman immediately. Wait till he comes out and go back to Roman's working place. Leave him there and go back home. You should receive a message, read it and go back to Roman again.

Go to Hove beach to give Michelle a lift. Park on the yellow spot and honk (push left analogue stick). Drive her to her house and answer the call from Roman. It's time to change your clothes. Go to the Russian shop and buy something more civilized. After a short talk with Roman, Michelle will call to make a date. After that Roman will call again - this time it looks serious.

Go to the R on the map and enter the basketball field. Kick few asses and go back to car as fast as possible. Follow Dardan to reach harbor. Get out of the car and go upstairs. Move close to him and take his knife (dodge and punch). Kick his ass and go back to car. Go back to Roman's workplace. Reward: 50$.

Now it's time for your first date witch Michelle (1). Go play bowling (2,3) and after that take her back home (1). After a while you should receive a phone call from Roman with a proposition of entirely different kind of date. 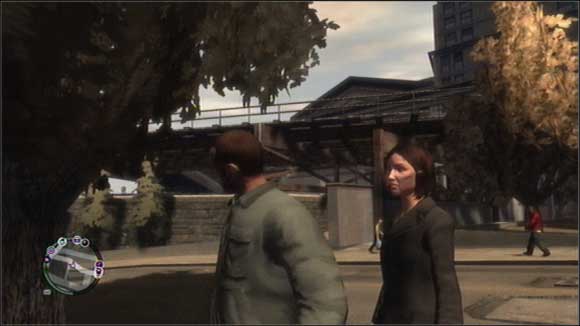 Michelle isn't picky but try to choose varied places for your dates.

Nico is able to date her from First Date till The Snow Storm missions. She will answer his phone calls from 6 a.m. to 23 p.m.

She likes: Russian cheap clothes, glasses, hats; you can also take her to Any Diner or Pizza This; she also likes Steinway Beer Garden, Lucky Winkles and Camrade's Bar; play darts or pool with her.

Take the Roman's cab and go pick up Jermaine at Rotterdan Hill. Take him to Masterton St. Something is not okay... That's right - it's a trap. You'll be surrounded by cops, so get out from there quickly. Escape and take Jermaine to Gibson Street.

Roman will ask you to give Little Jacob a lift. He's waiting near the park -take him to Schottler. He'll give you a gun, very useful in this mission. At the place go upstairs and wait for some action. When enemies appear just shoot them. The last one is waiting on the stairs. Drive Jacob to Café. Reward: 150$.

Vlad wants you to teach some shopkeeper a lesson. Go there and after short talk go to the dump nearby. Take a brick and throw it at the window. Get back to Vlad to take 50$.

Drive Jacob to Willis, and wait in the alley. When you see running dealers go after them. You can simply shoot them or run them over. It's up to you. Go back to Jacob and take him to Meadows Park. Prepare your weapon and kill the guy who's standing close to stairs. After that position yourself near the window and kill the next one. Hide behind the sofa and shoot the two remaining guys. Restore your health using medical kit and leave to Homebrew Café.

Vlad wants you to teach someone a lesson again. This time it's the laundry owner. Go there and get inside. Your target will run away, so follow him ASAP. Take a car from the backyard and chase him. When you get close to his van, try to block him to make him stop. Reward: 100$.

Another mission from this very likeable guy. He wants you to steal a silver Blista Compact (1). Go to the station and enter the train. You should reach a proper station in a while, go downstairs and find a car. Kick two guys asses and take this beautiful car. Go to the car wash first (2) and then to the hideout (3). Reward: 150$.