Upon arrival 'hack' the lock in the gate. Then go for a stroll over the rooftops of nearby buildings. Find a sniping rifle and get Rudy out of trouble by eliminating Jimmy's thugs. While you're engaged in a fierce fight don't forget to glance at the map from time to time; your targets are marked in red color. The mission is completed when D'Avanzo leaves the area.

Your job is to guard two lovers on their way to the apartment. You have to make sure that Meredith doesn't suspect anything. Get on a bike and follow them. Remember to keep a safe distance so that they won't see your shots. In other words, lose sight of their car and focus your attention on the GPS device. Every time a motorcyclist passes you by, slow down and serve him a short burst from your machine gun. Once Lester and his beloved safely reach the apartment you have to make sure that they won't be disturbed. You'll also get a chance to discover the perfect symbiosis between a blade and bodies of speeding motorcyclists.

Find a means of transport and go through all the places where you might find Rudy. Once you reach the right hideout you get an opportunity to eavesdrop on a conversation implying that all this time you've been led by the nose. As soon as you collect your jaw which dropped at the sight of Rudy, set off in pursuit of your lousy boss. The chase ends rather quickly with a tragic death of your employer.

In order to reveal the coded identity of your mysterious source you need to hack into the feds' database. Admittedly Huang will take care of the hacking, but still you have to be in position. As you are using dangerous WiFi transmitters scattered around town it is important that you find yourself in a place with the best reception of both the hot spot and each of the four target computers. The locations are marked on the map below. When file transferring begins you'll have to stand still for a few seconds. You're of course more than welcome to use this time to eliminate some guardians of public order who aren't too pleased with your actions. When you're done, lose the pursuit and go back to Wade's. 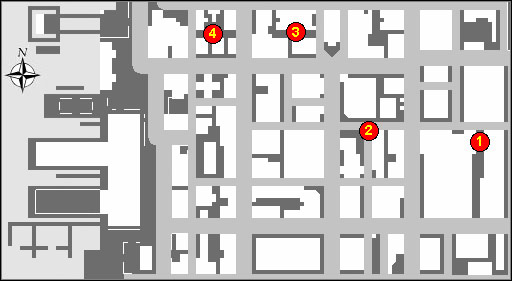 Take a minigun; sit in the back of Kenny's car and head to meet Hsin. Eliminate every possible threat that you meet on your way there. The benefits of having unlimited ammo are that you don't have to remove your finger from neither the A button nor the cross. After a while you'll be forced to find a new vehicle and switch places with your relative. Soon an enemy helicopter shows up. The bombs it throws at you may make your life a bit difficult but if you zigzag you'll be able to avoid being hit. When you reach your destination you're going to witness an official bequeathing of power.

Get rid of a padlock on the gate to Zhou's place and kill the guards. Talk to your target and deal with some more armed opponents. Use the elevator to go to the top floor of the building. If you're not in possession of an RPG pick up the one lying nearby. The time has come to face Zhou. He's in his helicopter. Moving constantly, use the right trigger to aim and A to take a shot. After several accurate shots go back downstairs where armed gangsters already await you. Once the ground is red from their blood head to another rooftop and repeat the performance three more times.

Along with backup in the form of your two tattooed buddies go to the harbor and take care of Chan's men. As expected, they put up stiff resistance in order not to allow you near their boss. When you fight your way through the guards the action shifts into the warehouse. Make use of the advantages that small rooms give and pull out your sword. Plundering the place helps you avoid the explosion caused by a grenade thrown under a cylinder and brings you material benefits such as an armor. After you get out of the building hijack a car and set off in pursuit of Hsin's son. Catching him will probably make the guy realize for the last time how fragile life is.

Along with Heston head to the meeting place. Soon all possible enforcement agencies appear and everything falls in chaos. While chasing your father's assassin through a pipe labyrinth eliminate upcoming waves of armed gangsters. At the same time try to protect Heston who went a different way. When a cop starts taking care of the control panel of the gate make sure that no one will disturb him. After leaving the factory area head to the port. Now the pursuit takes place at the open sea. Let Wade take over the steering; you'll be responsible for operating on the minigun. As usual, don't worry about the ammo and just blast away at anything that moves (holding the A button and steering with the cross). The next stage of the pursuit is a short car drive, the more interesting as you have to deal with four stars of police attention. Drive fast and try to avoid bumps; remember that the cops need only fractions of seconds to corner you and complicate matters. In the residence the moment of vengeance finally occurs. You can now get proper revenge for your father's death. Now it only remains for you to watch the credits and... get back in the game.