After arriving at the hotel find yourself a convenient shooting position. Put together a sniping rifle using a simple mini-game. All you have to do now is to wait for your target. He's wearing jeans and a white shirt. You have time until 3:30 PM - that's when he leaves the hotel. To make things easier, hold the left trigger and make a close-up in the optical sight. Keep an eye on the exit opposite the fountain. Pull the trigger when you're sure that the shot is right on the target. Now you have to leave the hotel and lose three stars of police attention.

As soon as you get into the car you get surrounded by reporters on motorbikes. The one who manages to take your picture automatically becomes your target. The fun part is you don't even need to use any weapons; you use a gun only when the victim had little luck and survived falling off the bike. In most cases it's enough to run the fellow over with your car. Your photo will definitely be the last one he took as even thirst for fame won't save his sorry paparazzi ass. After picking Chan up from the construction area head to another meeting. Just like earlier you'll have to deal with the reporters. As soon as Chow gets in the car step on it and go to Zhou's place. Unsurprisingly the paparazzi follow you even there.

You have to get rid of the evidence incriminating Chan before the FBI arrives. The first batch of the crates can be easily destroyed with Molotov Cocktails. Other evidence will prove more problematic, if only because it's scattered around the map. This time, apart from simply destroying the crates, you'll have to work as a crane operator. Get rid of the troublesome vehicles by throwing them into the sea (yet another mini-game). Destroying the last car may seem a bit problematic as you need to sink it in the sea; a bulldozer parked nearby will prove extremely helpful here. A good idea is to use the camera mode from behind your back (hold the left trigger to set it). Once you get rid of all the hot cars your mission is completed.

When you reach your destination destroy a tank truck using a Molotov Cocktail. This will create chaos and cause the people to run away in panic. Feel free to throw a few bottles of petrol at them. Try keeping the criminals occupied as if given the opportunity they will try to shoot your helicopter down. Don't worry about the accuracy of your aim; this time you have to put quantity before quality. Once you've dealt with the first two waves of your enemies the time comes to get rid of the ones trying to escape to the docks. As you will be encountering moving targets it is good to throw the bottles in advance. After burning the boats and their would-be operators head towards the statue. Don't waste time on targets running around you. Instead, eliminate each of the three stationary targets armed with RPG launchers; you get only a few seconds before they start firing at you. The mission is completed when you destroy the enemy helicopter.

First you have to find a fast car. After a while you'll get the opportunity to steal a Banshee which will prove perfect for the job. Then drive to the garage and install a bomb inside your vehicle. From now on you can come back here to enrich your car with some explosives. Before proceeding familiarize yourself with the map below which shows the route you are about to cover. After arriving at the bar (marked with [S]) follow a dealer to his hideout ([M]). His car is fast so try not to make too many mistakes in the pursuit. Driving too close is inadvisable as well mainly because your victim is a trigger-happy type. 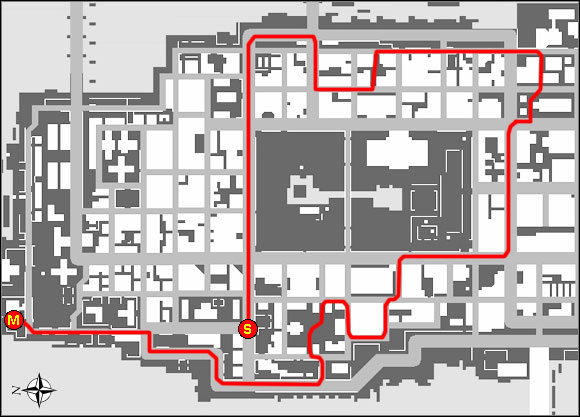 Head to the nearby police docks and steal a boat. Watch out for the cops who open fire as soon as they spot you. Next rush to catch Ming's boat before it reaches the shore. Launch torpedoes (by pressing the A button) as soon as you spot it. As the missiles can only move straight ahead you have to maneuver the boat with great precision in order to hit the target. Your enemies will try to set their boat perpendicularly to yours and shoot at you with a machine gun. Next they will throw water mines at you. You can either avoid them or try to destroy their boat with torpedoes. Once you've sunk the small vessel you receive a message from Wade. It appears that the criminals managed to unload some of the cargo. Go to the harbor; a van with an interesting load is just leaving the port. Find a car and set off after it. The mission is completed when you destroy the vehicle and kill the drivers.

As strange as it may seem, someone sank one of Zhou's boats loaded with hot cargo. Your job is to get it back. Take the helm of a nearby boat and set off on an exciting journey to a place of a recent sea battle. When you reach the spot scan the seabed in search for sunk objects. Fix the position of the stuff and come up to it. This will activate a mini-game in which you're going to fish out the stuff. Life would be too easy if there were only fish and drugs in the sea, though. You'll come across sunk cars and other fabulous stuff before you finally reach the cargo. After swimming into the coastguard zone you should use the radar as little as possible. Frequent scanning of the seabed increases your chances of being spotted. If you get too close to the policing services' boat or get nailed by them, get away as fast as you can and prey you won't get shot. After fishing out four crates of cargo go back to the harbor.

It is worth mentioning that this mission becomes significantly easier if you have the 'marathon' ability which enables you to run long distances without getting tired. So if you haven't completed the ambulance mission yet it may be a good time to do so. Get a sword out of a garbage can in the back of the building and head to the first hideout of the Triada members. When you arrive get out of the car and wipe out everyone who happens along. It's important that you don't use any other weapon apart from the sword. After a successful attack on the main target go through his wallet in search of an ID. Then head to the second address. In case the other Triada chief manages to get in the car and drive away, give immediate chase to him but remember that he has to be killed with cold steel. When you're done with him you'll receive information from uncle Kenny that Hsin wants to meet you in one of the parks. Go there right away.

After providing Lester with ten fixes of Ecstasy put on his jacket and get on his motorcycle. Generally do the best you can to impersonate him. Go to the gang's hang-out and start to show off in front of the members. Begin the performance with burning some rubber (hold B and Y; release Y when smoke appears). Gain one control point after another but be careful not to get too close to the gangsters. Resemblance to Lester may be quite striking but presumably you don't want to risk being exposed. After reaching the territory of an enemy group known as the Lost eliminate every last of the gangsters. Then get rid of two out of three enemy motorcyclists. Leave the last one alive so that he can spread the word. Next take the explosives from Lester and, just like the characters from the famous Fight Club, detonate them under the steel model of our planet.

Follow the characteristic umbrella. Hide behind random objects every time the victim looks back. After a few minutes the suspect meets his friend giving you the perfect opportunity to place a bug under their car. All you have to do now is to go according to the transmitter's directives and find the location of their hideout.