Once you've completed the 'Tricks of the Triad' mission, the doors to the drug market stand open before you. In the game you meet about eighty drug traffickers. Some of them belong to gangs offering (and buying) certain substances at reasonable prices.

All information necessary to do business are systematically saved on your PDA. After selecting one of the main categories, TRADE INFO, in the top screen appears a summary of the most attractive offers [1], whereas after selecting TURF MAP you'll see detailed information on gangs and drugs they're interested in (a résumé of these information may be found on the maps below) [2], [3]. From time to time you'll receive e-mails from friendly dealers. Every message of this sort tells you about a well-paid (and time-limited) offer of a particular seller and gives an opportunity to double your potential profits. You use your GPS device to track down those specific dealers (marked on the screen with characteristic icons) [4].

You will encounter six different types of substances. They differ not only in price but also in the interest their transactions evoke in the police (two stars). Since we're on the subject, it's worth mentioning that sealing the deal is impossible when you have cops on your back. Your contracting party will be scared away by the officers. A similar situation may take place if a cop is accidentally strolling about nearby. It's enough, though, to come back to the dealer after a few seconds and finish the transaction when he calms down.

Below there is a list of drugs available in the game: their names, average purchase price and potential (profits) from selling one fix of a particular substance:

The above piece of information is purely theoretical as establishing a rate for drugs in advance is practically impossible. Thus, it's also hard to estimate a precise (profit) from trafficking. It may happen that the divergence in prices reaches even a few hundred $.

At first glance the list above states that offers of freelance dealers are least attractive. In practice, though, it may happen that the price he wants (or pays) for a given drug is way more attractive than this offered by gangsters.

Obviously, dealing hard drugs such as heroin or coke is the most profitable but you have to remember about the high risk of getting caught. Ecstasy and downers bring you average profits. Weed and acid are the cheapest so, unless you are dealing with a special offer, don't trouble yourself with them.

When you're fairly well-off it's good to stash some 'special-offer' drugs in your hideouts. This is a long-term investment but it will pay handsomely when an occasion arises to sell some drugs at a good price. In case of the more expensive goods this tactic will bring you astronomic profits. If a dealer sends you an e-mail in which he expresses readiness to buy from you, you can always sell him some stuff at reasonable price. Don't count on enormous profits, though.

To make your life of a drug tycoon easier you can complete the 'Liberty State Delivery' mission (described later on in the tutorial). Once you're done you can carry maximally 100 and not, like before, 50 'pieces' of drugs. It's worth to remember that when you destroy all hundred security cameras in the city (their location has been described in detail in one of the chapters), the drug prices fall by 40%.

Below there are some maps illustrating whereabouts of every dealer, their gang membership, and their preference for buying and selling particular drugs: 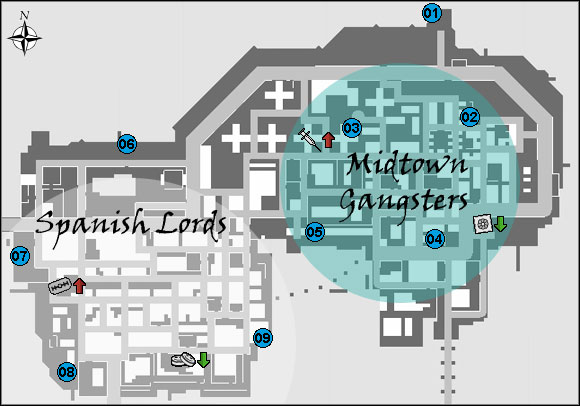 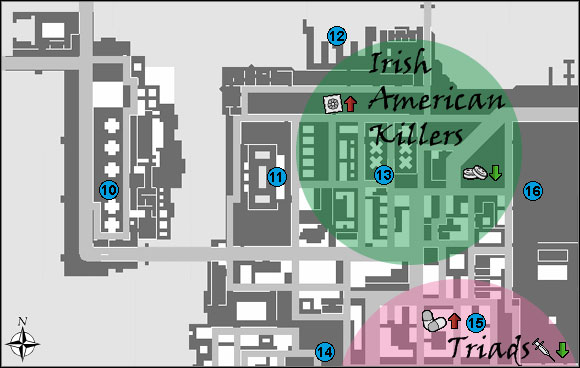 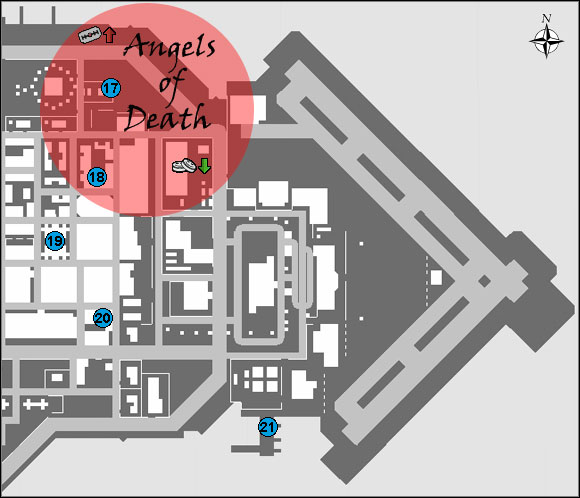