The Harley Quinn chapter in Gotham Knights focuses on fighting Freaks and ends with a boss fight - Harley herself. On this page, you will learn how to complete chapter quests and defeat the boss.

Harley Quinn's side quest series will begin when you complete the first chapter - Batman's Last Case. 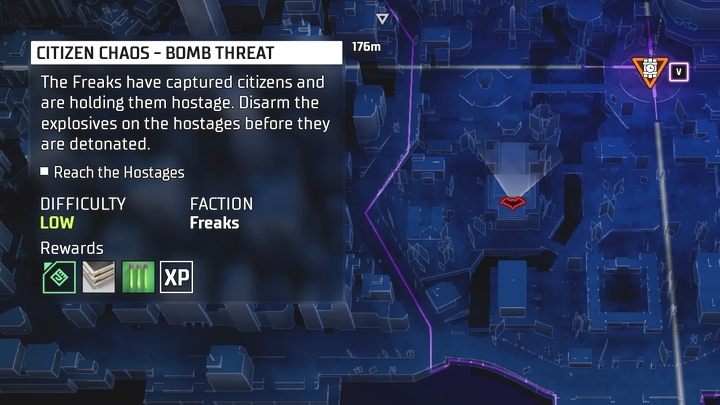 As part of this task, you must free three civilians tied to the explosives and defeat all Freaks in the area. 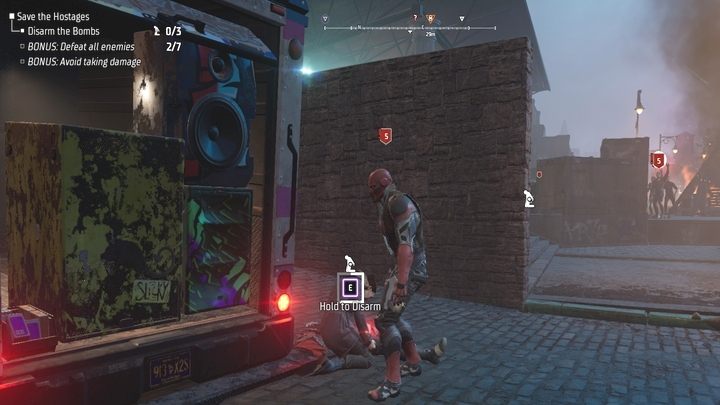 The mission is not difficult, but if you are detected, you will only have one minute to disarm all bombs. Defusing one takes nearly 5 seconds, and if someone attacks you, the process will stop. If you fail, you can try again.

Tip: When the timer starts, every second counts. Try to eliminate enemies quickly but avoid being flashy - slow finisher animations do not slow down the time. 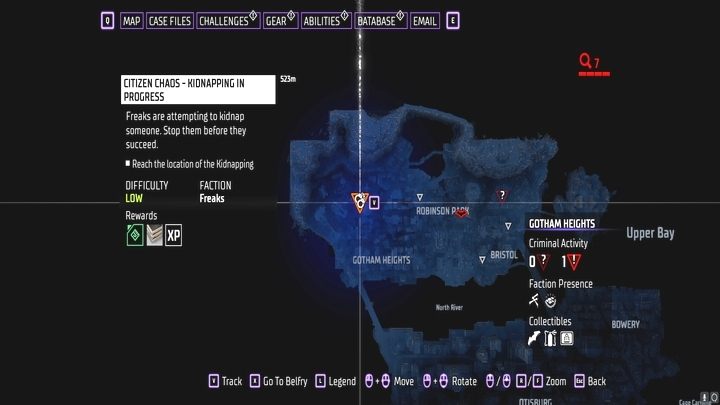 The next quest in the area starts immediately after the previous one is completed. This time it's a simple fight. Then you have to prevent an attack on the armored vehicle. This is the last side activity in this mission. Go back to Belfry and talk to Alfred to continue.

Basher and Blazer are weak against toxic but are resistant to incendiary damage. They attack with fire and shock damage. It is worth choosing the right equipment before these fights. 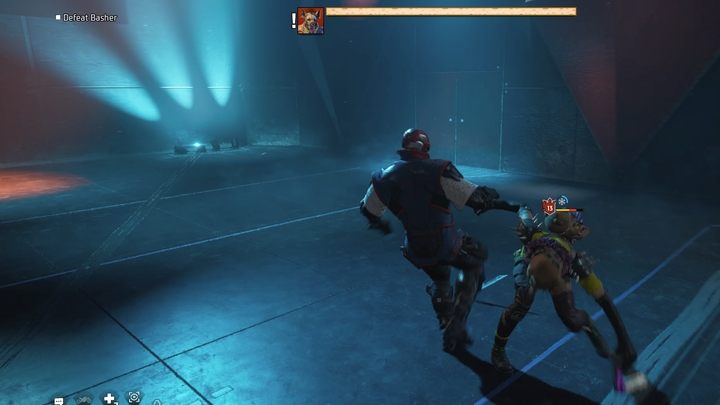 In this quest, you will end up in a hotel where you will face mini-bosses in several battles. The first enemy is Basher. First, deal with a smaller opponent - who you can grab and finish off very quickly. By default, to deal damage to a miniboss, you first need to get rid of his shield using a charged attack, then perform a quick combo or use the momentum ability. 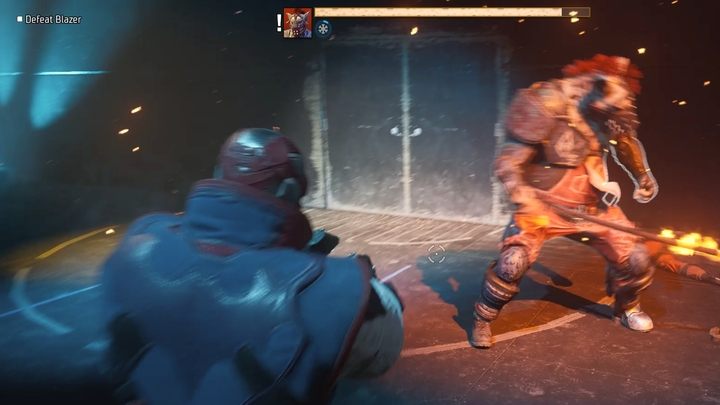 In the second round, you'll face the Blazer. He has no shield, but focuses on attacking. His weapon has a long attack distance and has incendiary effect. 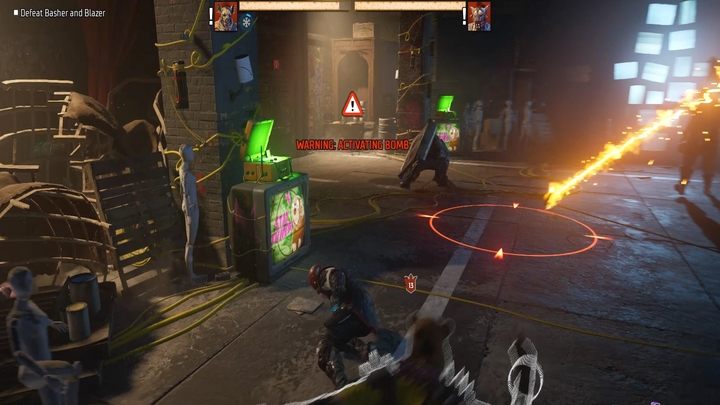 The second fight involves both mini-bosses, numerous Freaks, and bombs - first, you need take care of the bombs because their explosion will cause the mission to fail. 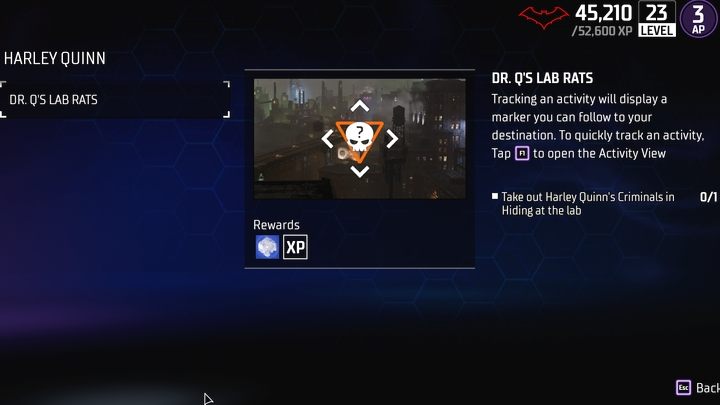 To continue the story, you need to complete two activities in the city marked with symbols with an orange frame. You'll be eliminating Freaks, but you'll also complete small challenges.

You will start the next task from the computer. This time you will stop the riots in the city. 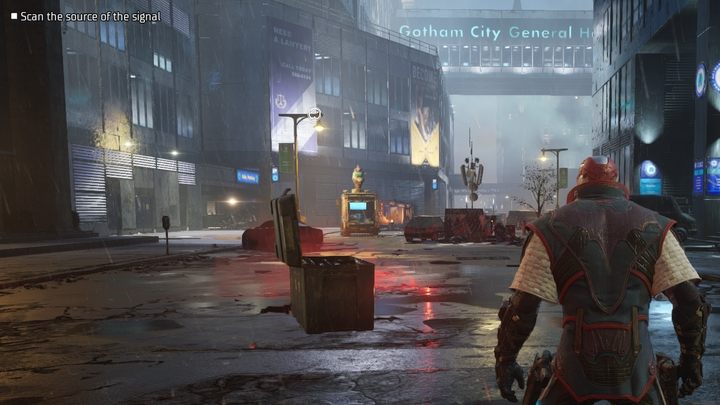 After eliminating the Freaks, head down the street towards the ice cream car where the transmitter is. Scan the vehicle and turn off the signal using the console. Now enter the hospital through the entrance on the roof.

Harley Quinn is resistant to toxic and incendiary damage but is weak against concussive damage (which she also deals herself). 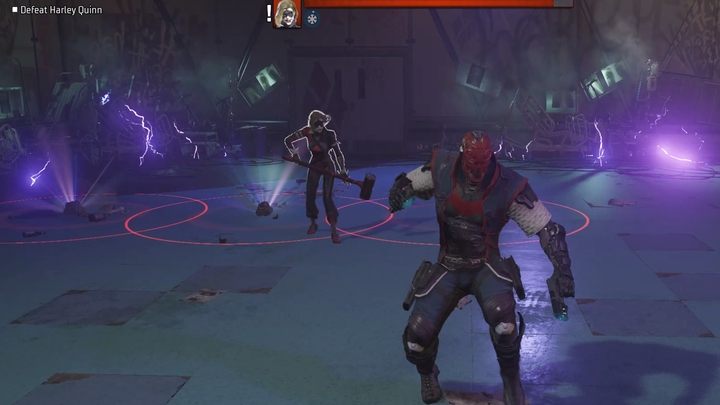 Harley is not a difficult boss. However, she is very agile and successfully dodges charge attacks, so you should focus on quick regular attacks. Avoid the walls - if the boss throws an electric scrap at you, you will receive additional bioelectric damage and may be temporarily paralyzed.

In the second stage of the fight, her movement pattern will be slightly changed, and she will also receive an electric hammer with additional elemental damage. In addition, in the first wave, she will summon a group of Freaks - deal with them first.