From this page, you will learn how to complete the subsequent story missions in Mr. Freeze chapter and how to defeat the boss in two fights. You will get to know his weaknesses and fighting strategy.

A series of side quests "???" will begin when you complete the first chapter - Batman's Last Case, and they involve Mr. Freeze.

Reach S.T.A.R. A laboratory in the southwestern part of the city. You can get inside from the roof on the first floor. 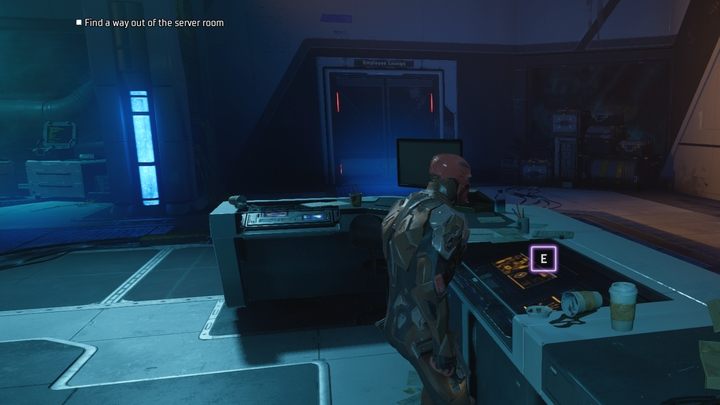 Inside, you will encounter the Regulators - a gang rarely seen before, often using cryogenic firearms. If you take too much cryogenic damage, you will be temporarily immobilized. Deal with the group inside the building and use the terminal to exit the server room. 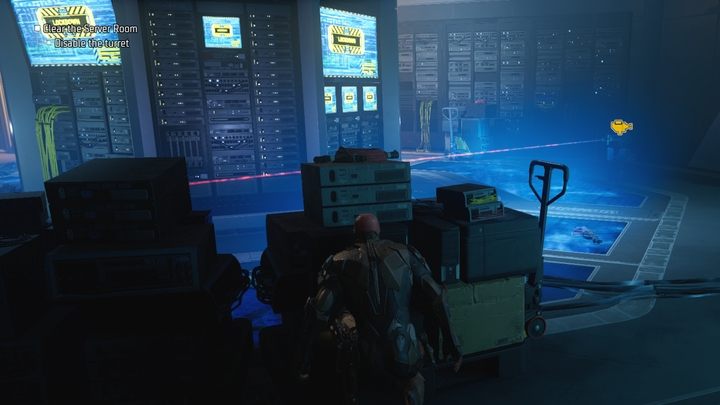 You will encounter a turret in the next room. You can turn it off by walking to it from behind. Eliminate two more small groups to find Mr. Freeze. Examine it using AR and follow it to the next room. Enemies will now be equipped with extra grenades that deal cryogenic damage and can immobilize your character. You can run around to lose your opponents and attack them by surprise if you have troubles in combat. 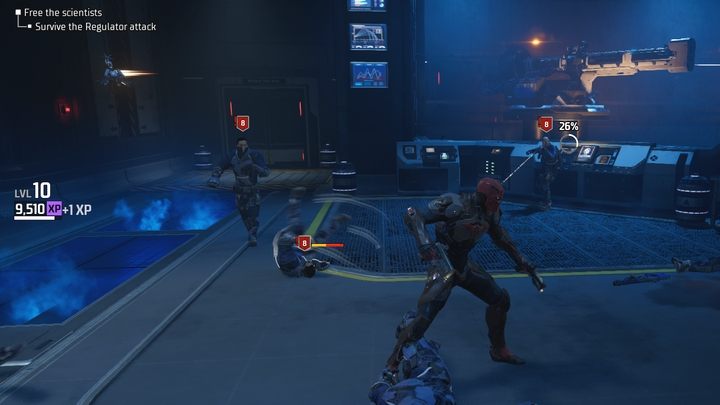 Follow the lead. An alternate path through the blocked door leads above them. After finding Mr. Freeze activate the turret via the control panel. You have to survive until it fires. Drones can be problematic: locate the enemy controlling them to deactivate all of them at once (this enemy has distinctive rings around his wrists). 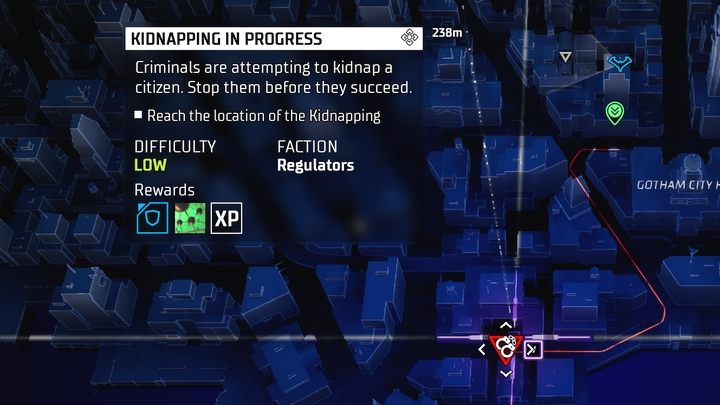 The next task requires you to stop 5 crimes in the city, which you will discover by gathering clues. It is worth taking this opportunity to upgrade the Knighthood of one of your heroes you have not trained yet. 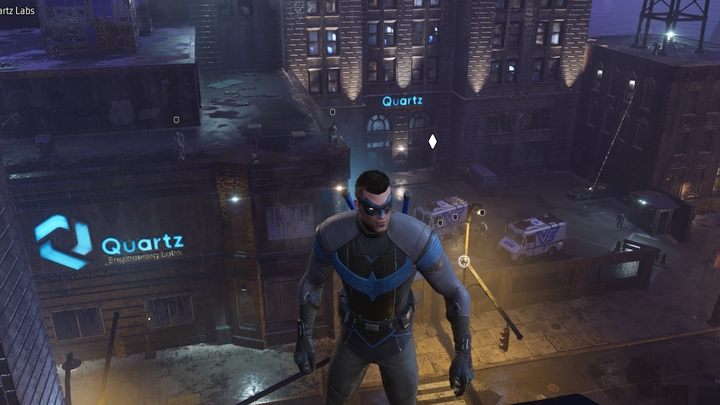 The actual task takes place in a closed location, so you have to activate it from the Case Files in the Batcomputer. Defeat a group of enemies outside, then six enemies inside. 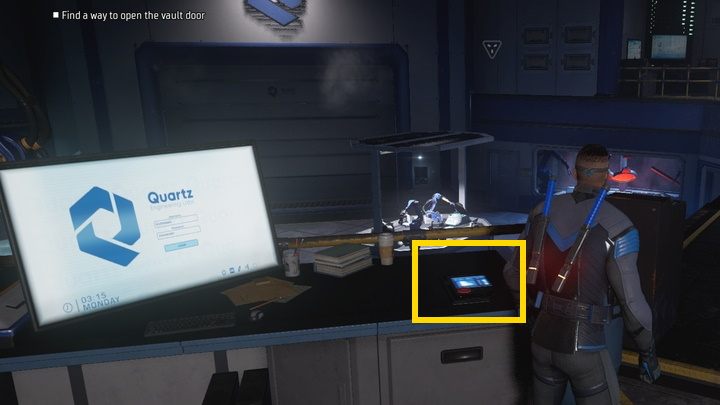 You can open the locked armored door by scanning the tablet on the desk in front of it. Press the button again. Two stronger characters will jump out from behind the door, and you can separate them by hiding earlier. 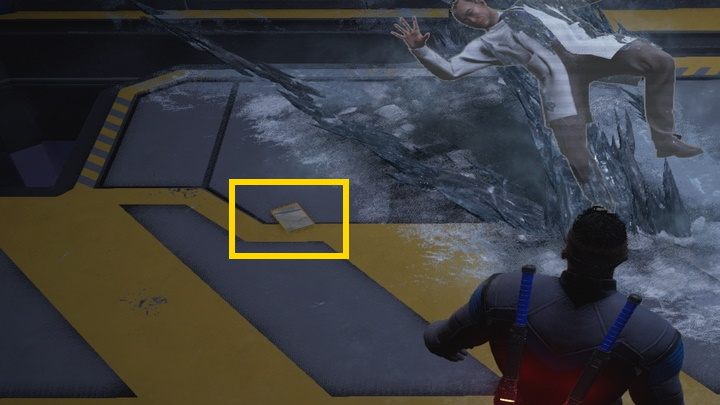 Inside you will find the body of a scientist. After scanning it, examine the diagram on the wall and listen to the message from the voice recorder located on the opposite side. The third, hard-to-see clue is the pile of documents to the left of the frozen scientist. 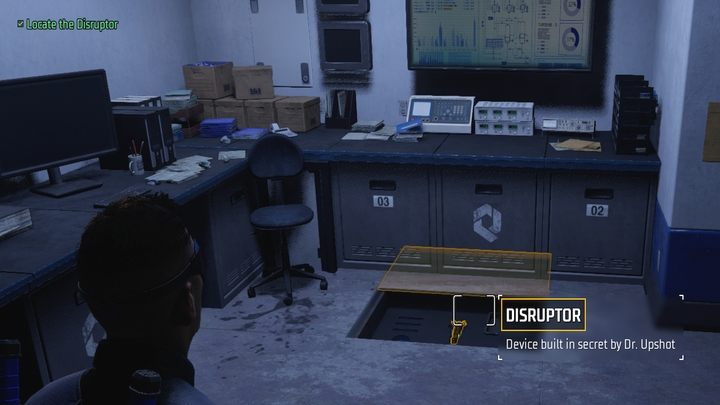 Now go up the stairs where automatic doors are. Behind them, you will find a panel you can use to open the next passage. The device you're looking for is in the stash on the floor.

This quest is available immediately after completing Quartz Labs and talking to Alfred. You can start it in the Case Files again.

First, you'll climb up the boss arena on the top of the building. It is worth getting ready for this fight by choosing the right equipment: Mr. Freeze has full resistance to Bioelectric damage and is weak against toxic and incendiary elements. He deals cryogenic damage and bioelectric on melee attacks. 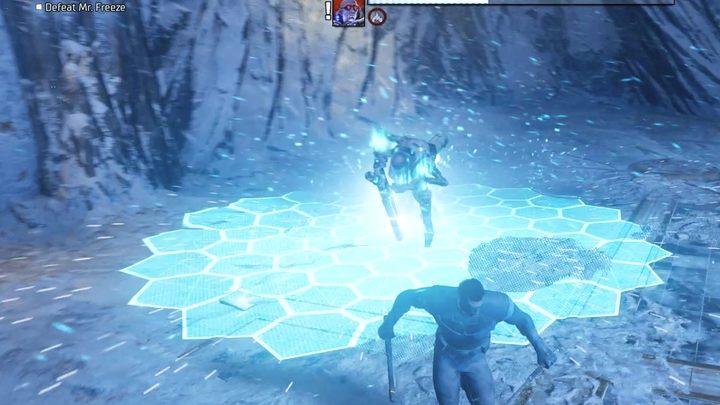 He has some interesting attacks. When a blue sphere appears around him, move away - the boss will fly to another place in the arena, creating ice spikes around him. As long as you see any spikes, do not approach the boss. After this attack, he most often performs a simple rocket attack, and you can't make him damage himself. 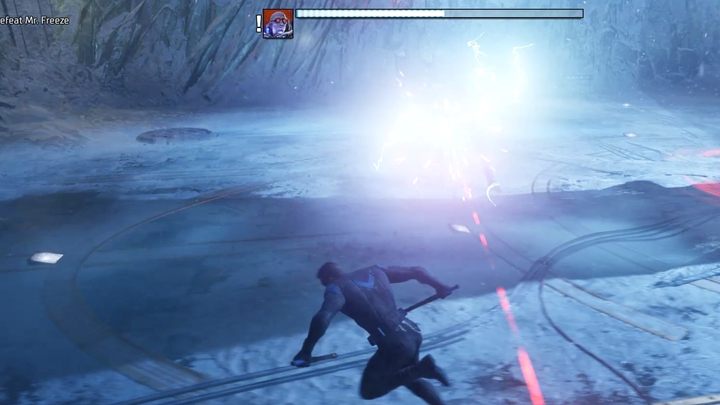 When you see a charged weapon and a red beam, run in either direction. This attack has a high chance of freezing you and making you vulnerable to further attacks. 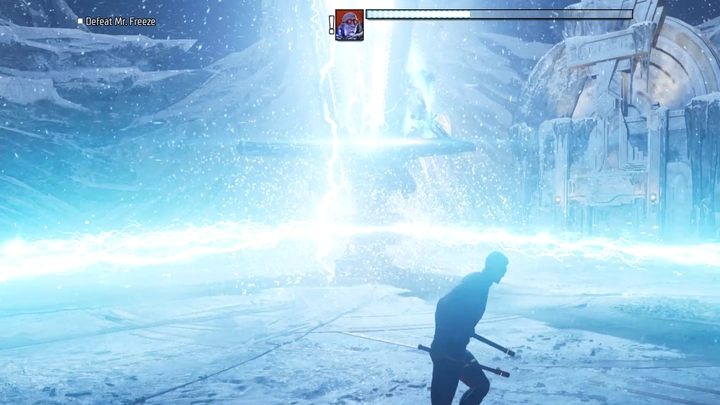 When the boss loses half of his health, he will move to the center and start the machine. For a while, the beams will come out of it and rotate - at this point, to avoid attacks, do not dodge, but use sprint. Later, the attack will also include dropping ice on the blue fields - you have to dodge and sprint again. 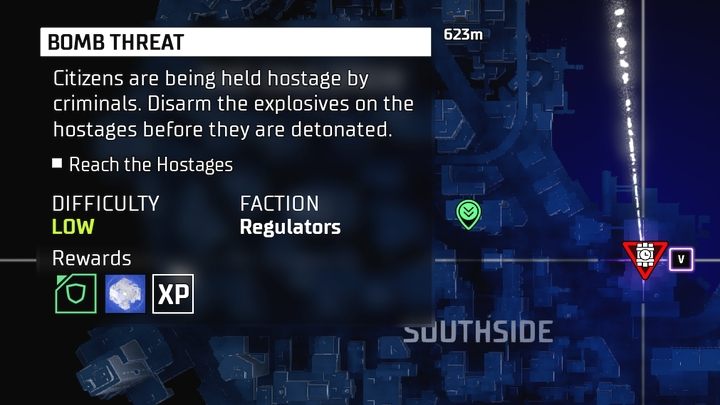 To continue the Mr. Freeze chapter, you need to question one of the Regulators. Check if there are activities involving them on the map and capture one of them during the fight. If you fail the first time, after returning to Belfry and starting another patrol, at least one marker will be visible on the map. 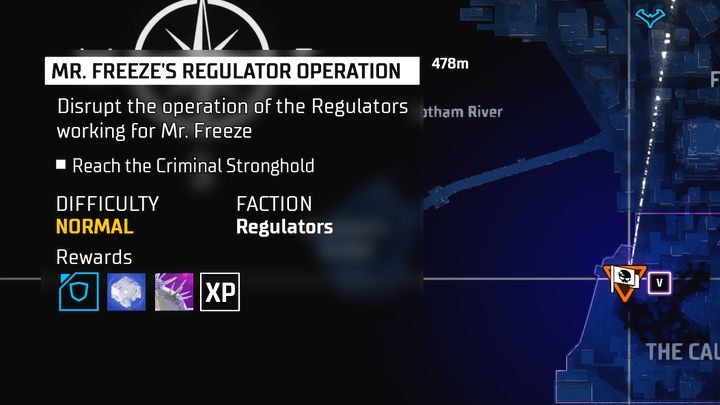 When you stop the Regulator, the next quest will appear in your log. Note that it requires a high character level. You will start the mission using Batcomputer in Belfry. 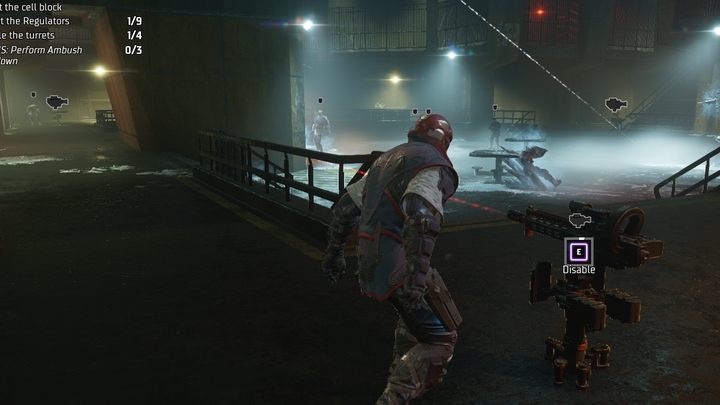 You will go to prison. It is a good idea to start by turning off the turrets by sneaking up to them - you can move around the floor unnoticed. 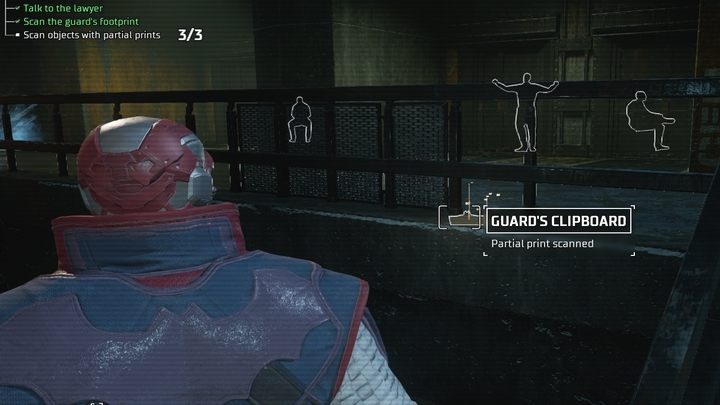 Then scan the footprint in front of the door where the guard and the lawyer are hiding. Follow the footsteps to three rooms and examine the personal items of the guard in each room.

The second fight with Mr. Freeze

Reminder: Mr. Freeze - full resistance to Bioelectric damage and is weak against toxic and incendiary elements.

In the second fight, the boss use a mech. It has several attacks: 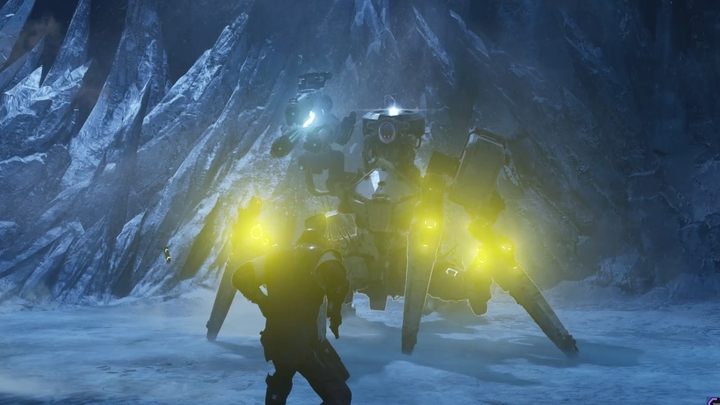 In this fight ranged weapons will be used. Aim at the bends of the legs, which are the weak points. Damaging one of them will temporarily stop the boss from attacking but damaging them or the order you attack them doesn't matter. 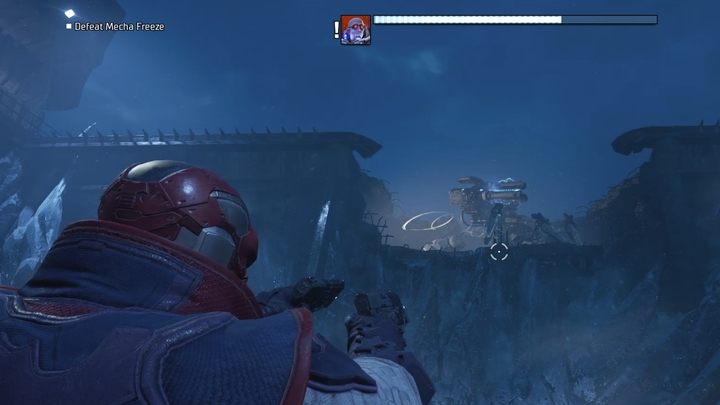 When the boss jumps upstairs, you can ignore him or keep shooting at him. At this point, you need to focus on avoiding his AoE attacks. 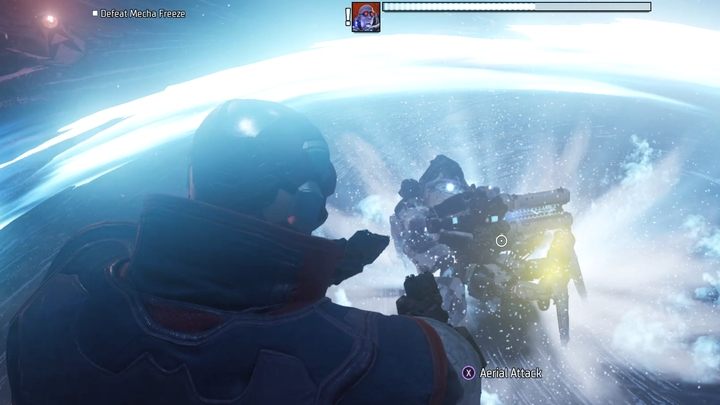 In the second stage of the fight not many changes - but it is worth focusing on targeting a single leg to neutralize the boss for longer. In addition, from now on, the boss will perform an area attack, which you need to run from using a grappling hook. However, it's worth changing the place to get a better shooting spot.