This guide to God of War III includes a detailed walkthrough of the story mode and descriptions of the available challenges. By using it, you will find all Phoenix Feathers, Gorgon Eyes and Minotaur Horns. Additionally, you will find every Godly Possession and enough experience points to upgrade every weapon on your first playthrough. Every enemy found in the game has been precisely described, together with tactics and some general tips.

During reading, you will come across some symbols. Red font symbolises experience chests, while three exclamation marks ([!!!]) point out that a given paragraph contains the localization of a hidden power up. [LS] (left screen) and [RS] (right screen) appear where distinction between the screens included is needed to fully understand the guide. I will be referring the Circle, X, Square and Triangle buttons as "basic buttons" in order to simplify some descriptions. 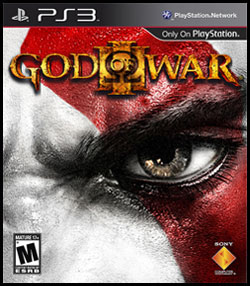 Developed exclusively for the PLAYSTATION3 system (PS3) system, God of War III is the final installment of the multi-million unit-selling trilogy. Developed by Sony Computer Entertainment's Santa Monica Studios, God of War III will bring epic battles to life with stunning graphics and an elaborate plot that puts Kratos at the center of carnage and destruction as he seeks revenge against the Gods who have betrayed him.

Set in the realm of brutal Greek mythology, God of War III is a single-player game that allows players to take on the climatic role of the ex-Spartan warrior, Kratos, as he scales through the intimidating heights of Mt. Olympus and the dark depths of Hell to seek revenge on those who have betrayed him. Armed with double-chained blades, and an array of new weapons and magic for this iteration of the trilogy, Kratos must take on mythology's darkest creatures while solving intricate puzzles throughout his merciless quest to destroy Olympus.

Key Features
ONLY ON THE PS3 SYSTEM - The award-winning development team leverages the processing power and technology of PLAYSTATION 3 system to make God of War III one of the most-graphically advanced next gen titles available, with even the dramatic cut screens running off the in-game engine.

GROUNDBREAKING DEPTH OF SCALE - Kratos will explore areas up to 4 times larger than those found in God of War II, as well as carve through entire armies while navigating on the back of Titans - living, moving, breathing levels as tall as the Empire State Building.

STYLIZED REALISM - Players will battle in detailed and unique 3D worlds lit by thousands of dynamic lights and textures with quadruple the resolution, which allows for realistic muscle striations, detailed facial expressions, and new heightened levels of brutality and gore.

SOPHISTICATED STORYLINE - The God of War III storyline is the epic conclusion to the trilogy; the storyline will be told in a way that is true to traditionalist roots in Greek mythology, from moral consequences to brutal battles against the Gods.

RIDEABLE CREATURES - Several of the menacing creatures of Greek mythology in God of War III can now be manipulated against their will, as Kratos uses them to cross chasms, inflict blind rage against enemies, reveal puzzles and secrets, and as tools of complete annihilation.

NEW WEAPONS AND COMBAT SYSTEM - New deadly weapons such as the Cestus -- powerful metal gauntlets with devastating strength -- and other brutal instruments of war that will allow Kratos to learn ruthless new techniques such as grappling with enemies and launching explosive wall-to-ground attacks.

LIGHTING TECHNOLOGIES - The dynamic lighting solution employed in GOW III is only feasible through the computing power provided by the Cell SPUs. For example, using the High Dynamic Range Lighting (HDRL) technology, the camera - when using Krato's sightline - will emulate the human retina, causing players to feel a sharp brightness when Kratos exits a dark area and enters a sunlit area, similar to how the human eye would need to adjust.