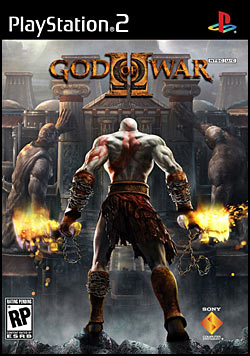 It’s time to wield the Blades of Chaos once again. Kratos, Spartan warrior turned God of War, returns for another claret-spilling frenzy, exclusively on PlayStationY2. With a whole new repertoire of combat moves and magic at his disposal, it’s down to Kratos to change the destiny of gods and men – by killing as many of them as possible.

2005’s God of War™ was widely considered to be the best PlayStationY2 game of the year, with over a dozen “Game of the Year” awards. Created by the same team – Sony Computer Entertainment America’s Santa Monica Studios (headed up by maverick developer David Jaffe) – God of War™ II brings twice the carnage to PlayStationY2 this time around.

In the first adventure, warrior Kratos dethroned Ares, the God of War, in the greatest – and bloodiest – of Greek tragedies. Now a god himself, Kratos sits on Ares’ throne on Olympus – but he’s not sitting about for long. More ruthless and bloodthirsty than Ares ever was, Kratos is one war god who loves the hands-on aspect of his job.

- Break bones, sever limbs and crush heads with all the brute force you’d expect of a foul-tempered god. Get stuck into a whole new armoury of combination techniques and elemental magic attacks – in addition to the moves you learnt in the first God of War.

- Come face-to-face with Atlas, Icarus and the ancient and noble beasts of legend; then kick the crap out of them. You’ve already carved up a Cyclops and a Cerebus – this time around, there’s a whole new menagerie to batter. Flying Gryphons? They’re not flying any more.

- More terrain to explore and more puzzles to solve. Whether you’re roaming the Dark Swamp or dealing with the Sisters of Fate, God of War™ II keeps your brain in top gear, even when your battle reflexes are taking a breather.

Key features:
- Mythological carnage
- Continues the epic story begun in the astounding God of War – and developed by the same award-winning development team
- A huge collection of new combat moves to complement those from the first God of War
- A whole host of new enemies and bosses as well as some familiar favourites
- Vivid new terrains to explore and ingenious new puzzles to solve This site is not associated with and/or endorsed by the SCEE or SCEI. All logos and images are copyrighted by their respective owners.