On this page of the guide, you will learn how to complete the Song of the Sands favor in God of War Ragnarok. Here we describe Hafgufa and Nora (The Burrows).

The Song of the Sands favor will be available after completing the Secret of the Sands quest. Once you remove the sandstorm in the Barrens, you will be able to move to the neighboring area in Alfheim. 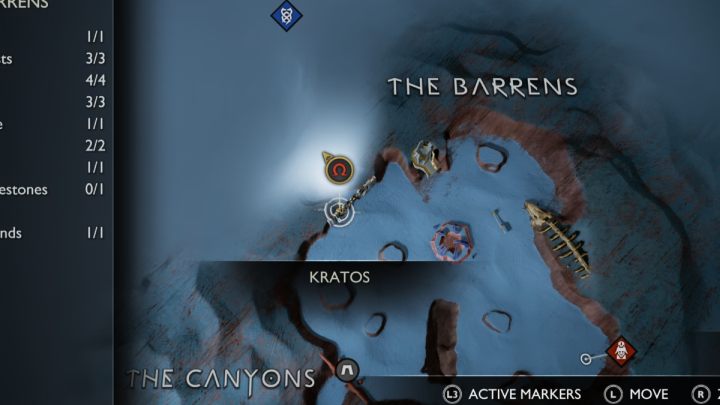 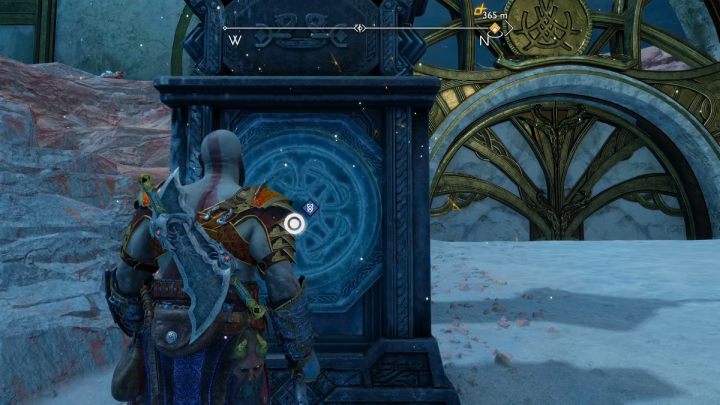 The gate leading to the Forbidden Sands will require the right tool to open, which you will acquire after completing the 6th main mission - The Reckoning.

When you do the favor, the sandstorm in the Forbidden Sands will calm down. You will then be free to explore the region.

Once you reach the Forbidden Sands, the favor will begin. You will have to find another Hafgufa in the Burrows region and free it from its bonds. 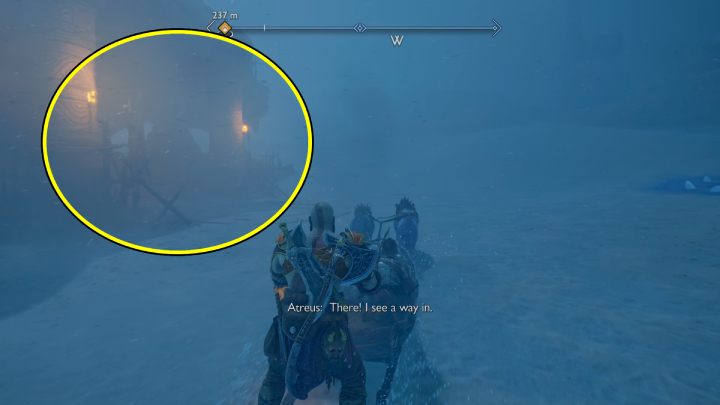 Approach the place marked on the map and find the entrance to the cave. The 2 torches should be visible from a distance. Climb down the wall to the bottom of the cave.

Once you are at the bottom, remove the blockade with a sonic arrow. Then go straight, grab the handle and jump to the other side. 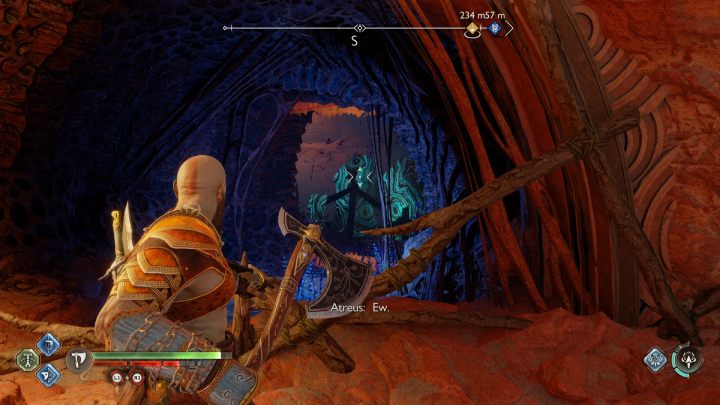 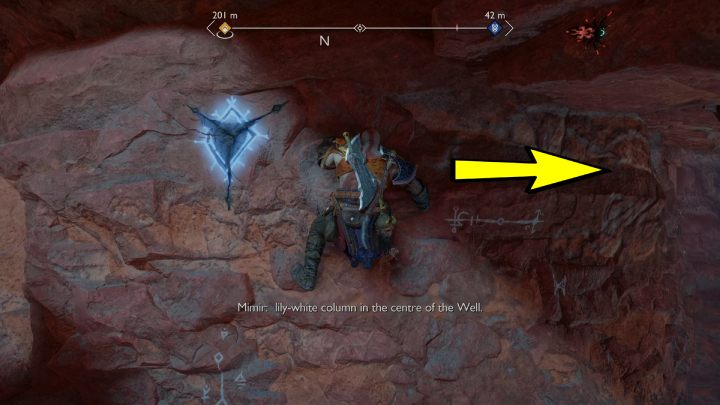 Go downstairs and shoot a sonic arrow at the hive. When the creature reveals the blockade, fire another sonic arrow. Jump to the newly discovered place and go to the next room.

Jump over to the adjacent rock and go right. Then turn back and, grabbing the handle, jump to the next part of the cave. 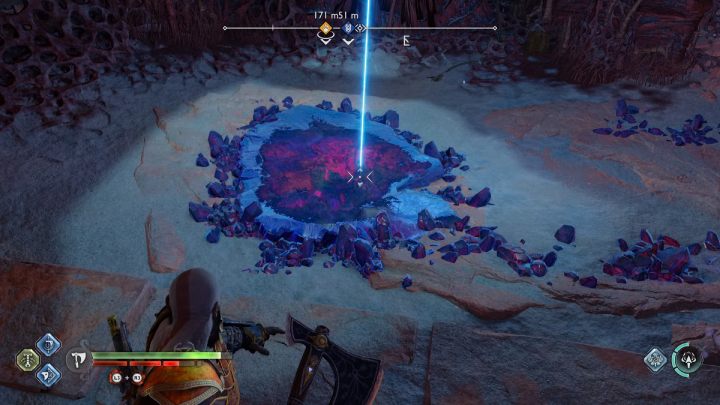 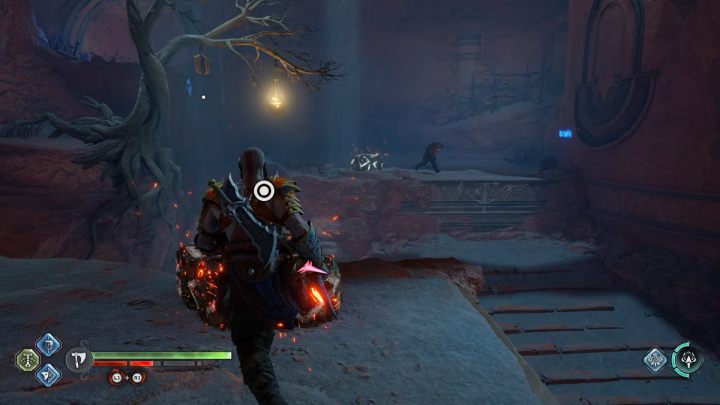 Throw the axe at the crystal on the floor and wait until the blockade is removed. Jump down and follow the path. Destroy the monsters' nest and jump to higher level. There will be a lot of opponents in the central room of the cave. Use elements of the environment to quickly defeat all monsters. 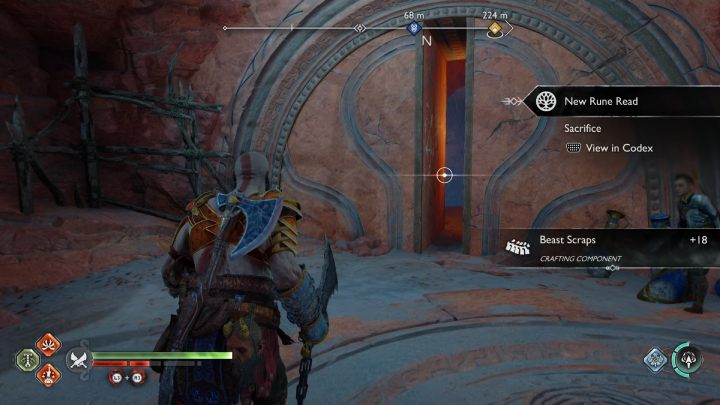 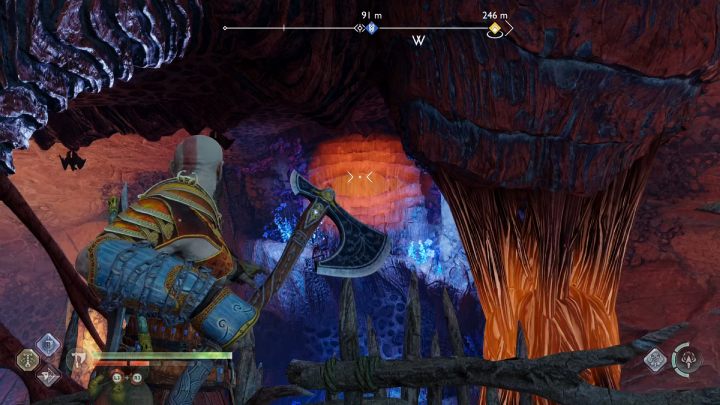 Go through the narrow crack in the wall and jump down to the lower level. Fire a sonic arrow at the hive and when it reveals a crystal, throw the axe at it. Jump back on the wall and move to the newly discovered area. 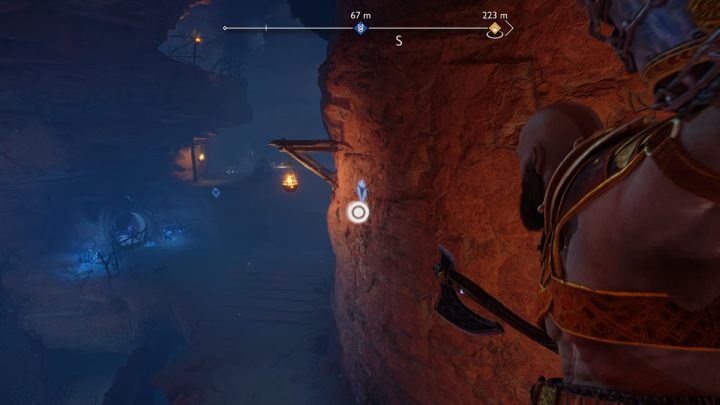 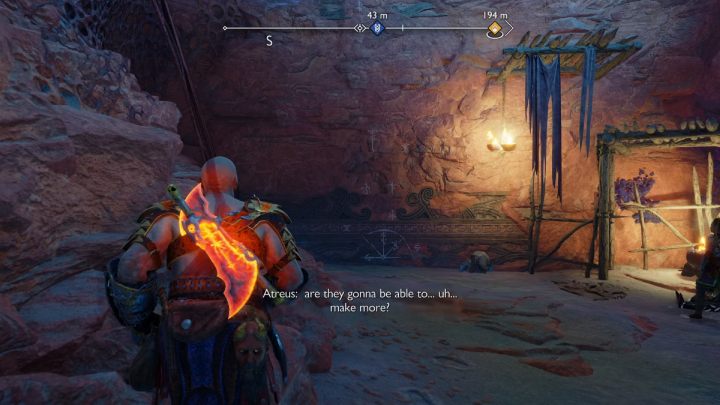 Jump to the next wall and go down. Defeat all monsters and Dark Elves. Next to the torches you will find a marked wall - you can climb it to the next part of the cave. 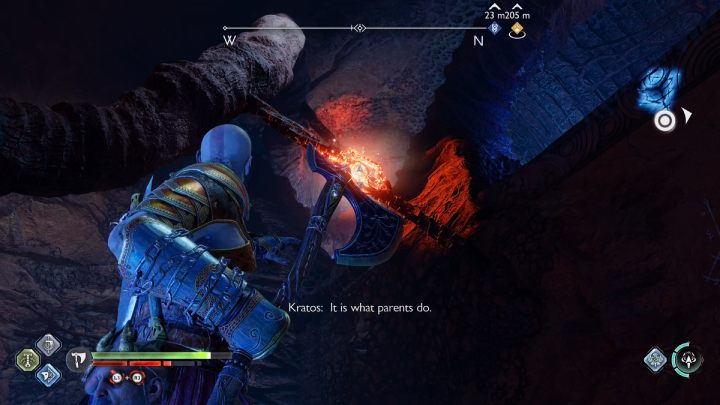 Cross the corridor and jump down. Position yourself at the right angle and remove the 3 connections blocking the way to the room with Hafgufa.

When you reach Hafgufa, you must remove 3 sets of red connections to free it. 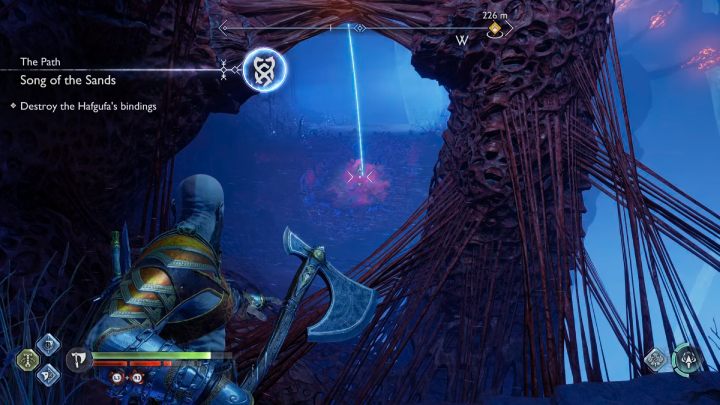 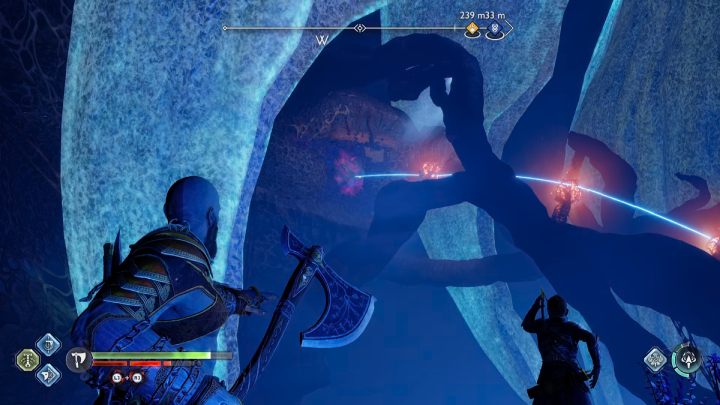 Turn left and throw the axe at the crystal on the wall. Wait until the axe removes the blockade covering the handle. Then jump to the other side and shoot a sonic arrow at the hive. When the crystal is revealed, throw the axe at it to remove the first set of red connections. 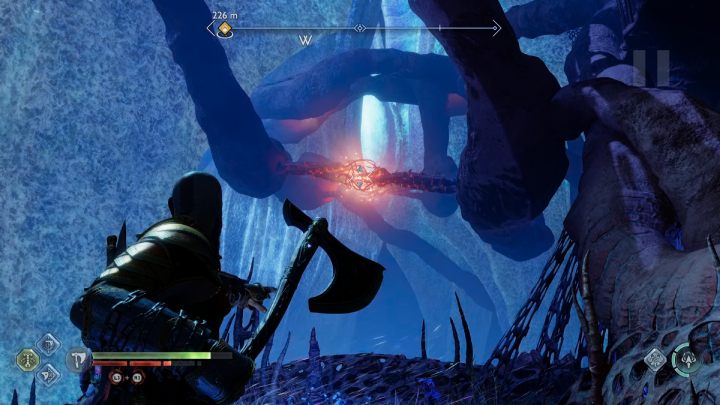 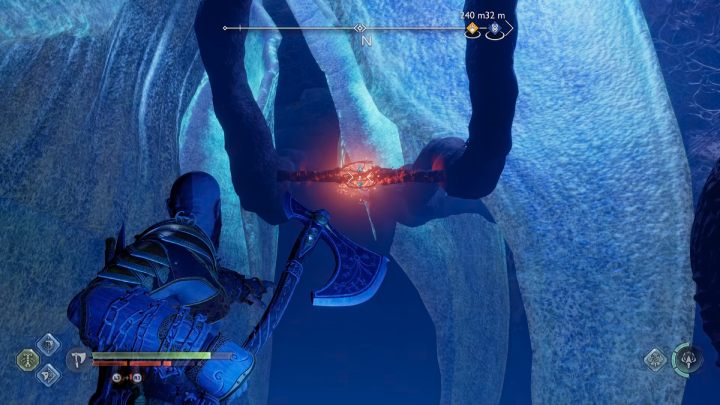 After removing 3 sets of red connections, a new passage in the cave will appear. Go down to exit the Burrows. 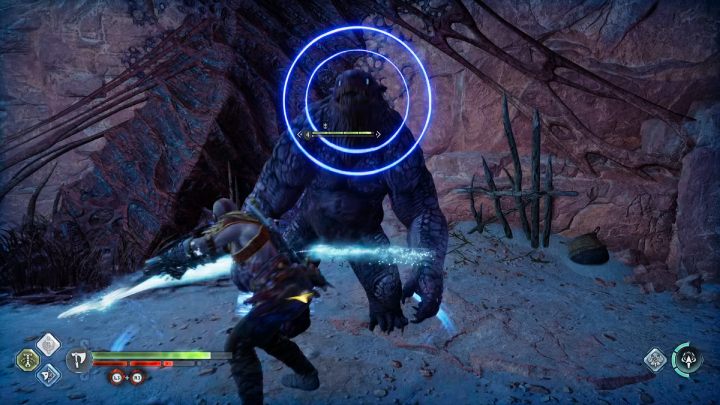 In the room with the legendary chest, you will have to defeat a troll and several other monsters. Use rune attacks and block the blue attacks of the main opponent.

On the left side of the chest you will find a wall you can climb. When you reach the top, continue climbing and jump from one wall to the other. 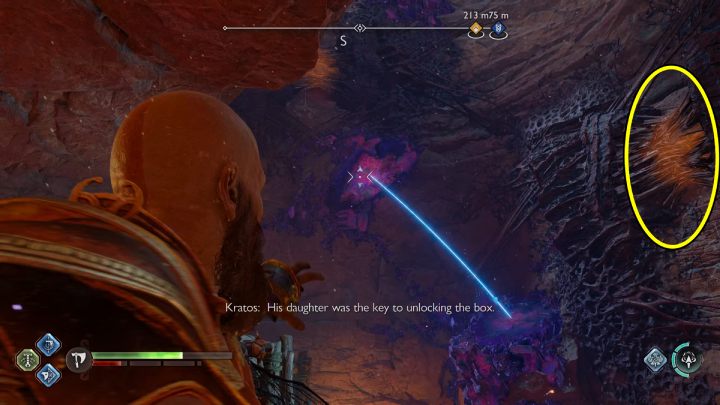 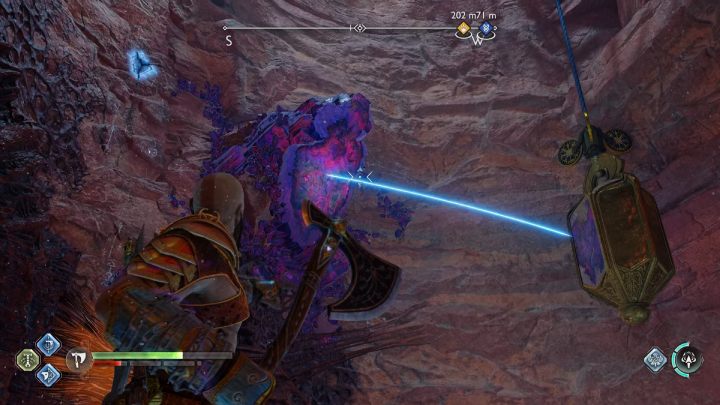 Throw the axe at the crystal, so that it bounces off of the crystal below, and wait until the blockade covering the place you can grab with the Blade is removed. Keep moving up.

Turn the suspended crystal twice to the right. Throw the axe at the crystal on the wall, which will bounce back and hit the blockade covering the next grab point on the wall. Continue climbing to the top.

Break through the wall and jump to the next room. Before leaving the cave, you will have to fight a Light Elf. 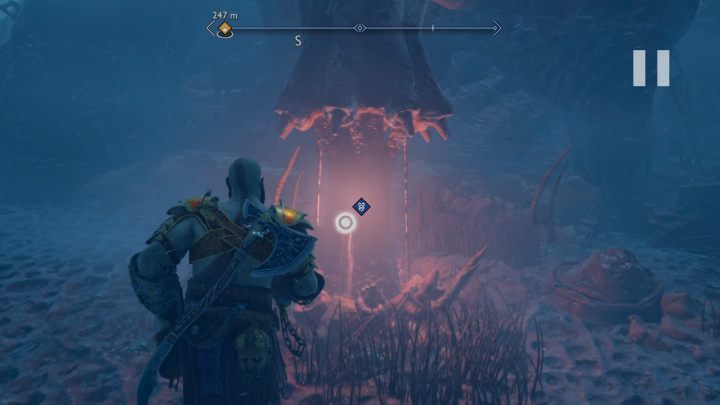 Once on the surface, find the last connections and follow the directions on the screen.