Returning to Vanaheim is part of the Creatures of Prophecy main quest of God of War Ragnarok. The walkthrough from our guide explains, among other things, where to find the wolves Skoll and Hati, how to recover the stolen moon, how to return to Freyr's Camp, how to rescue Freyr, and how to escape from prison with the wounded ally. 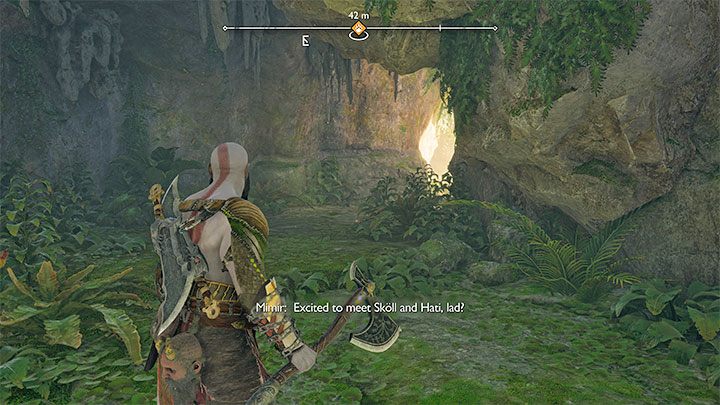 You must head from Freyr's Camp toward the Eastern Barri Woods. The path is initially linear and you will encounter some stronger opponents (attack them one by one).

Squeeze through a hole in the ruins to reach the woods. You must approach your destination from the northwest. You will find Skoll and Hati sleeping. 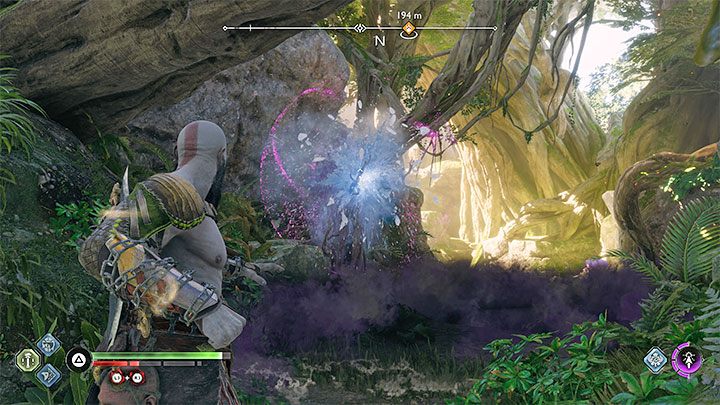 You must now head north toward the Abandoned Village. The road is blocked by poisonous fumes - create seals by the plants and throw the axe at them. This will allow you to temporarily get rid of the poison.

Defeat the enemies at the entrance to the ruins and use the Blades of Chaos on the barricade. In the Abandoned Village, you have to slide down the rope and break the wall with by using the spear. 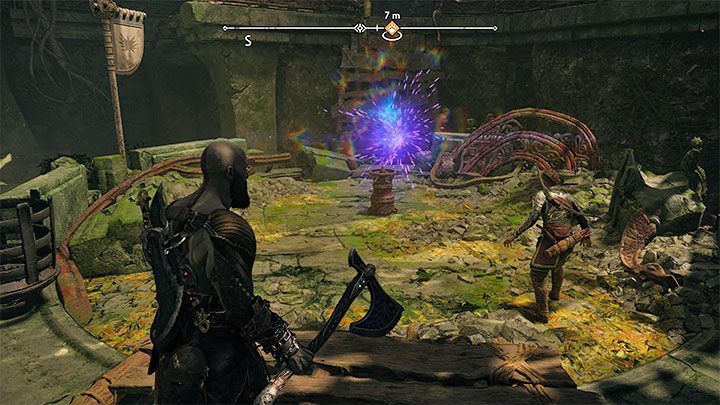 In the ruins, you will have a larger battle with enemies - move around the battle arena and jump to adjacent ledges. Avoid attacks after receiving bifrost damage.

After the fight, approach the place on the lower level where the moon is. 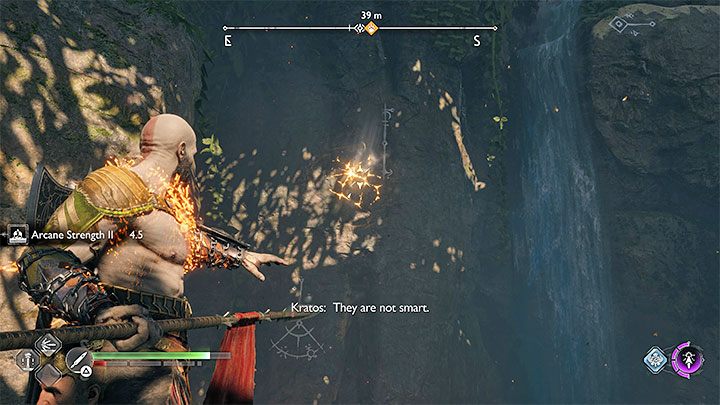 You do not have to rush during the chase and there is no risk of failing the mission. Follow the fleeing enemy. When you reach the precipice, use the spear on the hole from the picture and you will unlock a new spot to climb.

Once you reach the top, you have to face a enemies. A strong monster - Wyvern - will also be here. Focus on this beast, while avoiding its attacks. 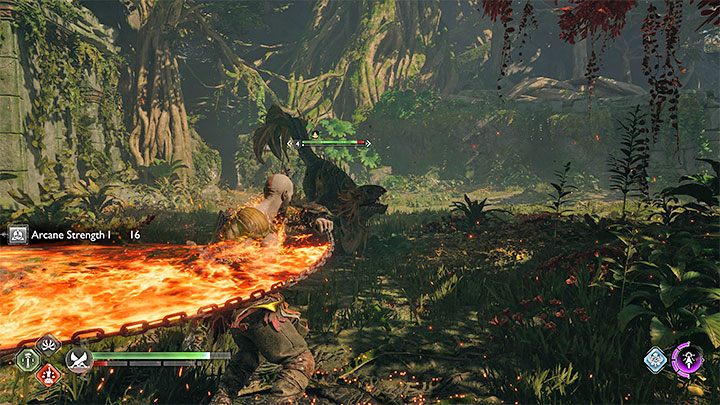 After killing the Wyvern, deal with its Tamer. This opponent can cover itself with orange armor - destroy it with the Leviathan Axe.

The stolen moon lies on the stump (orange icon) where you fought the battle.

Return to Skoll and Hati 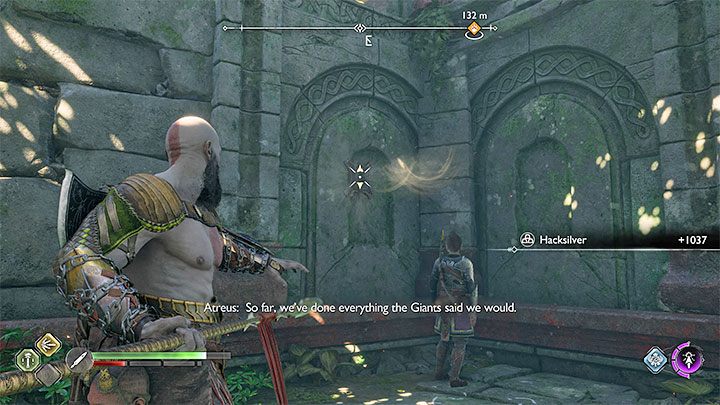 You can squeeze between the rocks not far from where you fought the battles. In the next location, there is an opening for throwing the spear - use it to climb up.

Defeat common enemies along the way and go south. Once again, reach the lair of Skoll and Hati. 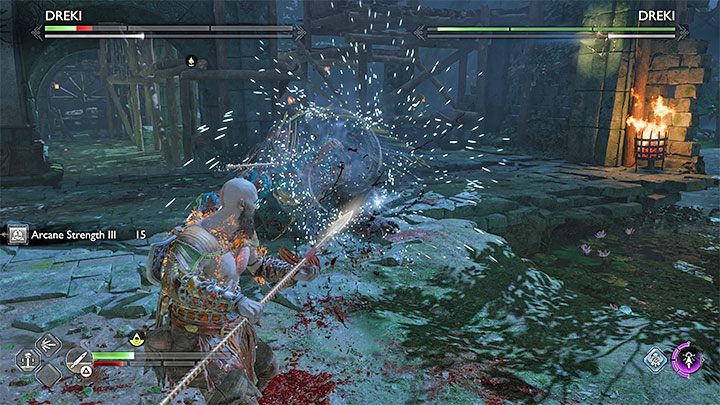 You will experience a change in the time of day - night will now come in Vanaheim. This will unlock new passages. Pick up the gift left by the wolves from the ground.

While heading west towards the encampment, you will encounter more enemies. After approaching the passage between the regions, the heroes will be attacked by a pair of Dreki mini-bosses. Attack one beast at a time. Mimir and/or Atreus can warn you of incoming attacks by the other monster - use a dodge even if you can't see the attack. 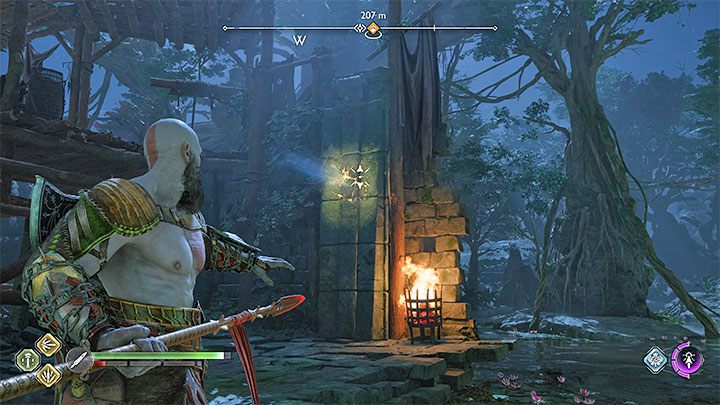 After the battle with the Dreki, find an opening in the wall in the ruins (above image) - throw your spear there and detonate it to unlock a new climbing spot. Reach the top of the ruins and rope down to re-enter the Freyr's Camp region.

Complete the journey west of the allied encampment. You will meet Freya and she will replace Atreus as your companion.

Rescue Freyr from the Einherjar 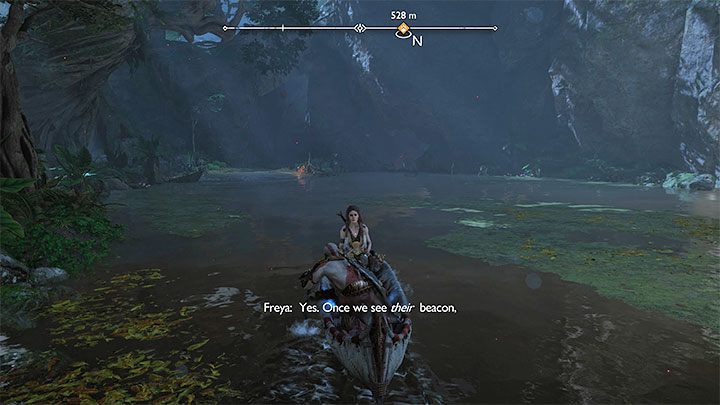 The new destination will appear in northern Vanaheim. Take the western exit from the camp and return to the place where you left the boat.

Take a boat north (the passage was blocked earlier). You can step out of the boat onto the shore at a new location (image). You will encounter more opponents. 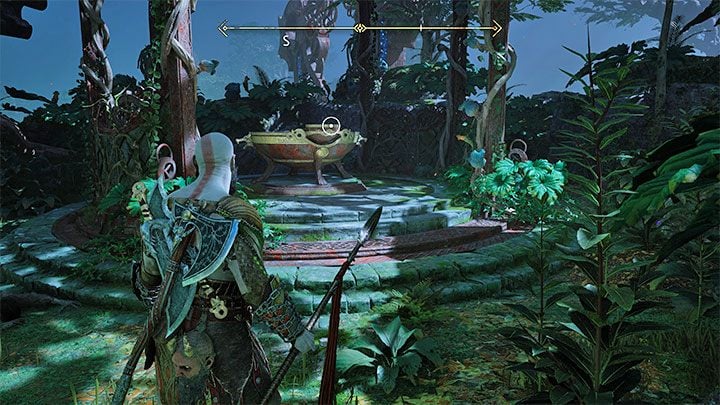 Reach the place where you lifted the stone block (new passage). Defeat next enemies and reach the Celestial Altar. Altars in Vanaheim can be used to change the time of day - switch to daytime.

Near the Altar you will now find a climbing spot that was inaccessible at night. 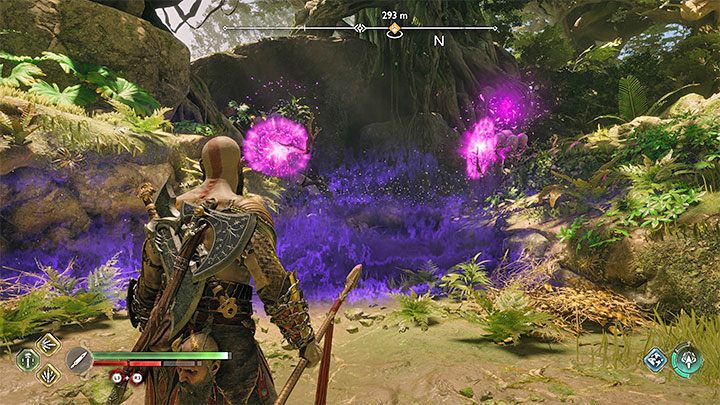 Follow the new path and defeat more enemies. You will reach the poisonous blue vapors again - you must form seals at two plants and throw the Leviathan at them.

You will reach a passage to new ruins - defeat more enemies. React to the colors of enemies' armor - use Blades on enemies with blue armor and the Leviathan on those with orange. After the battle, use the Blades of Chaos on the small barricade. 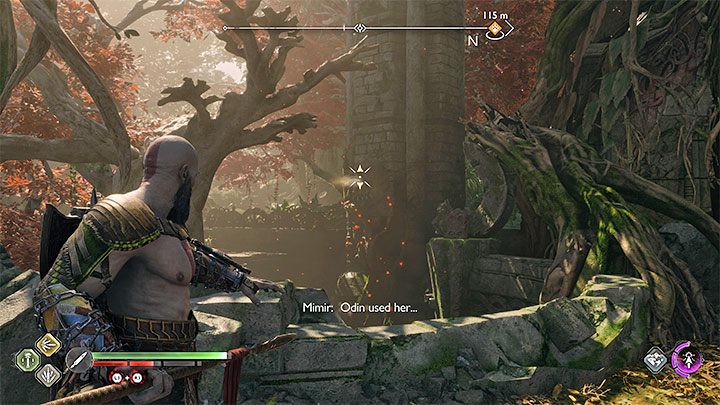 On your way, you will come across the lair of the mini-boss Blatonn - fighting this strong werewolf is completely optional.

To advance in the quest, head north. You will pass the place where you defeated the boss Nidhogg during your first visit to Vanaheim. Throw the spear at the crack from the picture - this will create a rod. Use it to move on. 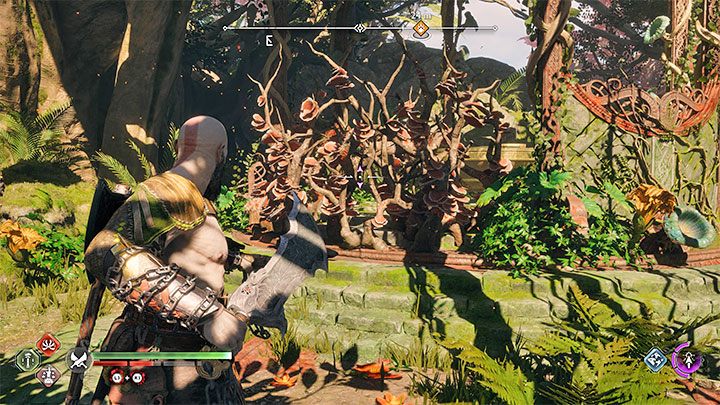 You will reach The Northern Wilds region. Pull the chain at the large circular passage.

Destroy the vines with the Blades of Chaos to unlock your access to the next Celestial Altar. Change the time of day again (to night). 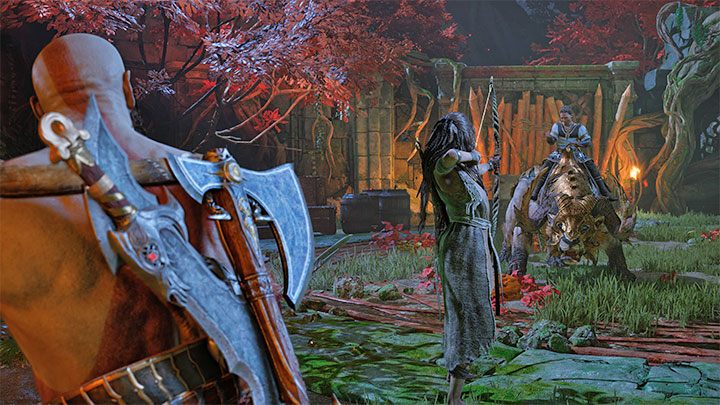 You will unlock the option to jump down to the arena next to the altar. You will now fight Heimdall and his beast.

We described the boss fight in detail on a separate page Gulltoppr and Heimdall in the Bosses chapter. 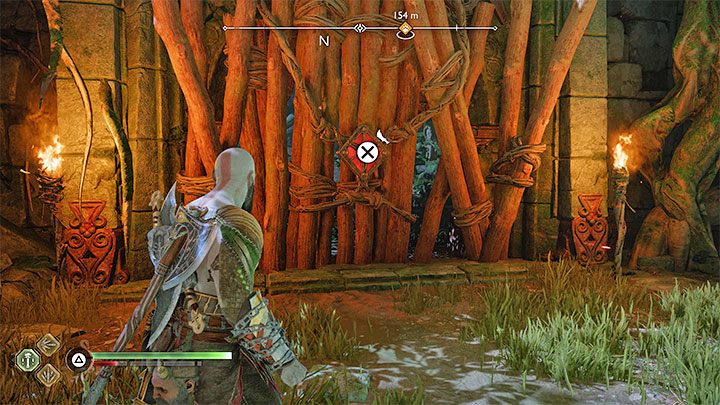 You need to reach the northwest of the place where you fought Heimdall. Use the Blades on the large gate to unlock the exit from the arena.

Once you reach the new ruins, you will fight more enemies. Leave the slightly stronger opponent with a huge melee weapon for last.

Escape from the prison 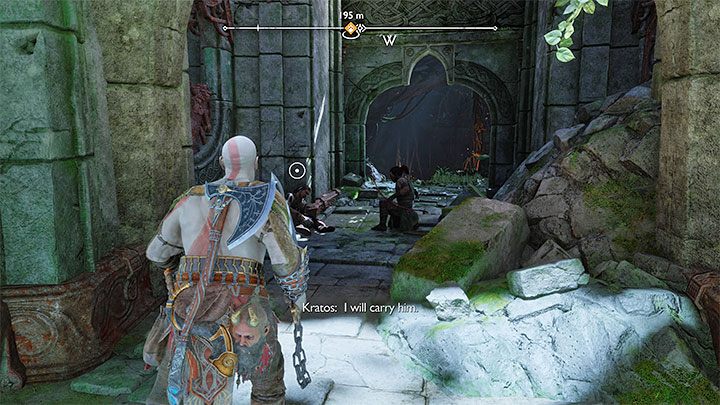 Reach the injured Freyr - Kratos will pick him up and start carrying. During the escape scene, you can't put Freyr on the ground. Do not stop and press R1 or R2 to hit monsters.

The heroes have to reach the boat. Watch cut-scenes. After returning to Freyr's Camp, the task will end. 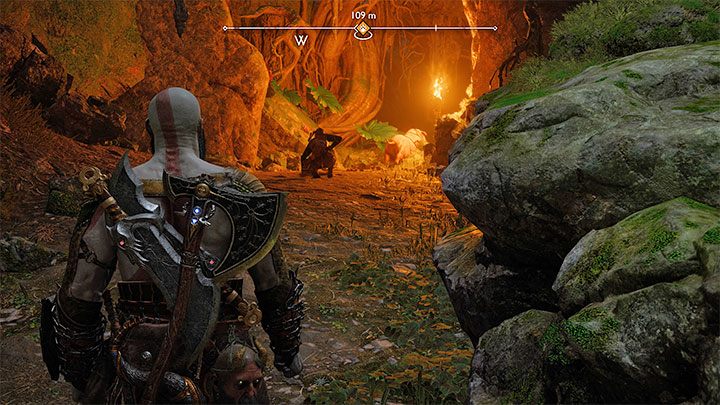 Again, choose the western exit from the camp. Along the way, the Scent of Survival favor will start automatically - it is optional and is about following Helka (we described it on a separate page). This will ultimately allow you to unlock the Crater, an optional large region of Vanaheim.

To advance further in the game, return to the nearest Mystic Gateway and move to Sindri's House. Take a seat at the table, and the next main quest - Unlocking the Mask- will begin.